Woody Allen once said, “If you want to make God laugh, tell him your plans.” I believe God has a sense of humor and plays practical jokes on us all the time. Jokes I like to call: Unwritten Rules.

Whenever you’re in a hurry, the rest of the world isn’t. Whether it’s your morning commute, navigating through a Costco parking lot or the McDonald’s drive-thru, we spend half our lives sitting in traffic and the other half trying to avoid it. Sure, there are the rare times when you race out of your front door in a panic because you’re running late and you don’t hit a lick of traffic, thanks to it being Columbus Day or some other random holiday you’ve never heard of. But most days when you are running late to make a 9 a.m. meeting that can’t be moved, this is when the “Obstacle Convention” comes to town, and it’s led by a bunch of Toyota Priuses (Prii?) all in the fast lane doing 44 mph. 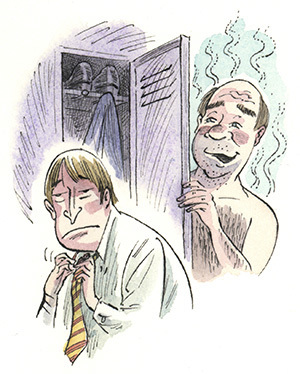 In your health club locker room, no matter how empty or crowded the gym is, the locker right beside you will always belong to the buck-naked person who just got out of the sauna. And they want to chat. I never knew so many overly comfortable, annoyingly confident naked people existed until I got a gym membership.

Are you one of those women who believe all men lie? Well, I bet you didn’t know about the unwritten rule that states, “Men get to tell you as many lies as you are wearing.” Here’s a sample breakdown: 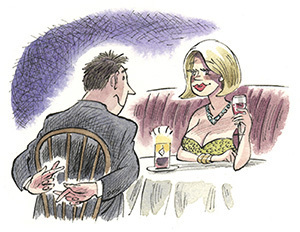 Passive-aggressive is the new aggressive. No one says what they want anymore. The other day a guy I barely talk to leaves me the following voicemail: “Hey Owen, give me a call, I have to ask you something.” Really? Why the unnecessary mystery? Now I’m afraid to call this guy back because I have no idea what he wants. He could want a ride to the airport, a kidney or, worse, he could want me to help him move. So now I am forced to be passive-aggressive back and aggressively avoid running into this person so he can never ask me the question he should have left on my voicemail in the first place. 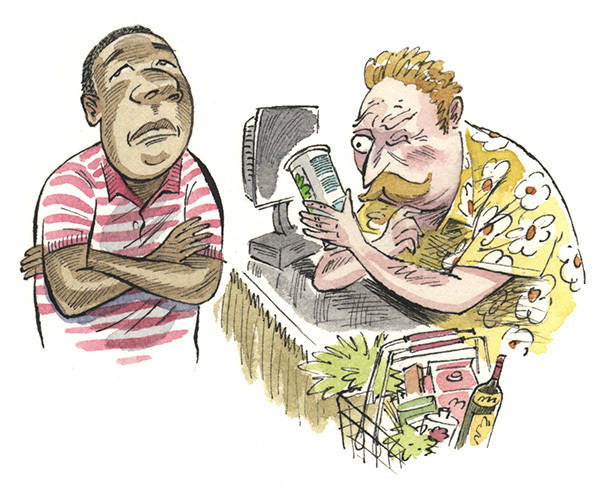 When you’re at the checkout counter in Trader Joe’s, the cashier will ask you more uncomfortable questions about the stuff in your cart than a detective on Law & Order “dun dun.” A cashier asked me once, “I see you ain’t got no meat, you a vegetarian or something? What’s that like? Is it hard?” Alas, their intrusiveness is the price you pay to avoid Whole Foods’ prices.

In college football, you cannot win a national championship with a team full of players who know both their parents. Those kids received too much love growing up. In order to bring home the BCS hardware, your team needs to diversify and recruit some kids who don’t know their daddy. That type of pain could lead you all the way to a championship!

Anybody who starts a sentence off with a disclaimer like, “I’m not the type of person who” or “I’m not this” or “I’m not that” is always exactly the opposite of what they claim not to be times 10.

I purchased movie tickets online recently and they charged me a “convenience fee.” I think it should be an unwritten rule that when you aren’t happy with what you paid for you get to charge the establishment an “inconvenience fee.” That way the next time you are seated next to a screaming baby in an airplane seat you paid a trillion dollars for, or when your overnight shipping takes three days to arrive, or when the guy at the car wash adjusts your seat to meet his preferences and leaves it so you bang your knees trying to get into your own car, you no longer have to go to Yelp or Twitter to complain. Instead slap them with your “inconvenience fee” and drive off with a big fat convenient smile! 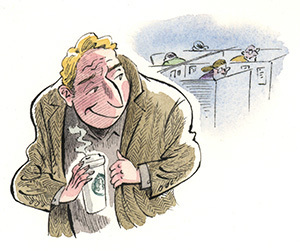 If you work in a cube farm and tell one of your cube-mates you’re going to Starbucks, do not offer to bring them back something, because if you do they will casually forget to pay you back. And you can’t ask them for the money because it’s awkward to confront someone about $2.75. So unless you want to be “that person” holding up the line reading through orders on 10 different Post-it notes, don’t announce you’re going to Starbucks — just go.

When you’re on the phone and doing all the talking, if the only response the person on the other end says is, “That’s crazy,” that means they haven’t heard a word you said.

Owen Smith ’95 is a comedian who can be followed on Ttwitter @owensmith4real.