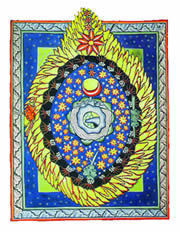 She may have lived in the 12th century, but the German mystic Hildegard of Bingen speaks to the 21st, says Margot Fassler, Notre Dame’s Keough-Hesburgh professor of music history and liturgy.

The historian of sacred music has been working for several years on a ground-breaking study of the medieval Benedictine nun. In her lifetime, the many-faceted genius made significant contributions in theology, poetry, music, art, science and medicine, as well as founding several religious communities.

“I think people today are looking for ways to bring many things together,” Fassler says. “Hildegard was a theologian, composer, artist and scientist who had the ability to synthesize knowledge.”

The mystic is most widely known for her theological insights drawn from a series of visions that she explained and illustrated in her treatise Scivias and other works. “Hildegard saw every person’s life as a kind of epic saga, a quest for theological understanding, where each of us have choices to make between good and evil,” Fassler observes.

Exhibiting what may seem a modern attitude toward ambiguity, the Benedictine mystic believed that as long as a person holds the question open as to whether God exists, she remains on the road to some sort of salvation, the ND theologian notes.

In particular, Fassler has been intrigued with Hildegard’s vision known as “The Cosmic Egg.” The image, illustrated and discussed in Scivias, basically presents an Aristotelian view of the world, Fassler says. The Benedictine mystic sees the egg as a metaphor for the world and church. It is a dynamic force, with an outer shell of flame surrounded by an inner darkness of struggles. The Earth is suspended in the middle, surrounded by virtues sparkling like stars.

The Notre Dame professor says in the Cosmic Egg, as in Hildegard’s play, Ordo Virtutum (The Order of the Virtues), the nun places the quest for theological understanding at the center of the cosmos. “You can see Hildegard putting everyday decisions that humans make at the heart of the purpose of God’s creation,” Fassler says. “It’s an extraordinary view, a microcosm and macrocosm.”

Illustration of ‘The Cosmic Egg’ with the permission of the Benedictine Abbey of St. Hildegard, Eibingen.