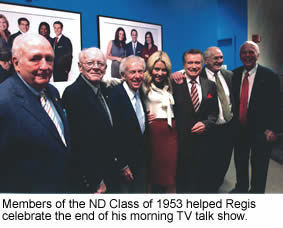 Regis Philbin, Notre Dame class of 1953, ended his morning talk show duties on Live! with Regis and Kelly on Nov. 18, 2011. The man who holds the Guinness World Record for “most hours on TV” often spoke enthusiastically of his alma mater on the air, regaling audiences with affectionate descriptions of everything on campus from his favorite duck in Saint Mary’s Lake to the courtrooms in the new Eck Hall of Law.

Father John Jenkins, CSC, president of Notre Dame, was among those who paid tribute to the popular daytime host. His appearance followed that of former Irish football coach Lou Holtz and included the presentation of a replica of Holy Cross Father Anthony Lauck’s statue of the Visitation, which stands outside the campus bookstore. “I had to come out on behalf of the whole Notre Dame family to tell you how much we love you and how proud we are of you,” Jenkins told the humbled entertainer, adding, “We expect to see more of you now.”

Some highlights from his final show include his no-tears pledge; a personalized version of a song from the Broadway cast of Rent referencing Philbin’s on-air minutes, “nine hundred ninety-five thousand six hundred minutes” and the possibility of hosting a new game show.