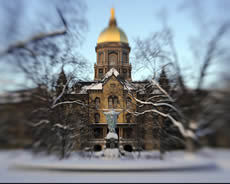 Here’s a story. A boy is born in 1913, in Pittsburgh. His Irish father and German mother carry their first child up to a tiny white wooden house in the hills above the city. The boy proves to be an excellent student, quiet but thorough, and he itches to go to the University of Notre Dame, three hundred and thirty miles to the west, the golden dome gleaming in his dreams. His parents thrill to the idea, for he would be the first child ever to go to college, and to Notre Dame!

But then came Black Thursday, the October day in 1929 when the economy shattered and dreams shattered and families shattered and millions of lives were bent. The boy was 16 years old. The money he had saved to pay for Notre Dame vanished. He left high school and got a job to help the family eat. By now he had a brother. A sister had died. His father lost his white-collar job and started to sell glass. They lost the house. They moved from city to city, state to state.

He never went to college.

By 1941, when his country entered the Second World War, he was married, with a son. By the time he died many years later he had seven children. He never saw Notre Dame, never had that moment when you first see the Dome from the highway, shockingly real and calm and stunning above the yearning trees. He never walked slowly up Notre Dame Avenue, past the cemetery, past the statue of the Madonna with her arms spread wide in welcome, past the statue of Father Sorin doing his Moses imitation, through the sunlit thicket of the sycamore trees, past the friendly wall of Walsh Hall, down to the lapping lakes.

He never sat in the deep corner of an old classroom trying to decipher Chaucer or Kierkegaard or calculus or chemistry. He never grinned in amazement at Frank O’Malley or John Dunne. He never sat in a hall Mass in his sweats late at night. He never ran to class through walls of snow as high as his chin. He never rode the rattling ancient train to Chicago to see what he could see. He never seethed and roared and hammered his feet in the football stadium. He never sat in a pub with a pitcher of beer and four friends arguing bitterly about girls and music and girls and money and politics and religion and girls. He never read something so arrogantly silly and self-absorbed in the Observer that he laughed so hard that no kidding shot milk out his nose. He never cut across a quadrangle of lush lovely grass on a dusty dirt path worn by students despite the roars of trustees and groundskeepers. He never went to a play or a concert or a speech with a girl he hardly knew but very much wished to know. He never endured fluid mechanics or Proust or a game against Purdue in rain so dense and cold that even the crows were huddled by heaters behind the bench. He never saw crocuses born miraculously again near the library in April against all evidence that spring would ever arrive.

He never hitched a ride home by calling a number pinned on the wall at the Huddle. He never walked around the lakes late at night alone trying to fend off sadness and loss and the news from home. He never accidentally walked into the art museum and was startled to find not one but two paintings that completely blew his mind and changed his attitude forever about the possibilities of abstract art. He never got to talking to a kid in his stats class who turned out to be from Botswana. He never opened an ancient bronze mail slot in his hall to find a letter from his grandmother so redolent with her peppermint and liniment scents that he nearly wept. He never detested a roommate. He never borrowed someone else’s notes from class. He never wrote a paper that didn’t decide if it was a theology or literature paper until midway through the second page. He never swore in annoyance at his bicycle lock and then looked up to see a bemused priest grinning at him. He never crouched on the quad and fed a squirrel candy to see if food coloring would turn a squirrel red.

He never stood among the sea of his fellow graduates, in the spring of 1934, feeling distinctly uncomfortable in his flowing black gown and peculiar mortarboard hat, peering anxiously into the crowd looking for his mom and dad and kid brother Jimmy, half-listening to the Commencement speaker droning on about life lessons, wondering what he would do next, wondering if the girl would write to him after he graduated, wondering if the country he loved could stand up again from all the dust and despair, wondering what sort of man he would be, wondering when in God’s name the speaker would close up shop, and trying out the stentorian phrase Elmer James Doyle, University of Notre Dame Class of 1934, which seemed like a wonderfully dignified phrase to lay upon a boy who never expected such a phrase to be spoken in the world; but this morning I speak it for him, with respect and affection for my quiet smiling uncle, who never got what I did, until today.

Brian Doyle ’78 is the editor of Portland Magazine at the University of Portland, and the author most recently of a novel, Mink River.