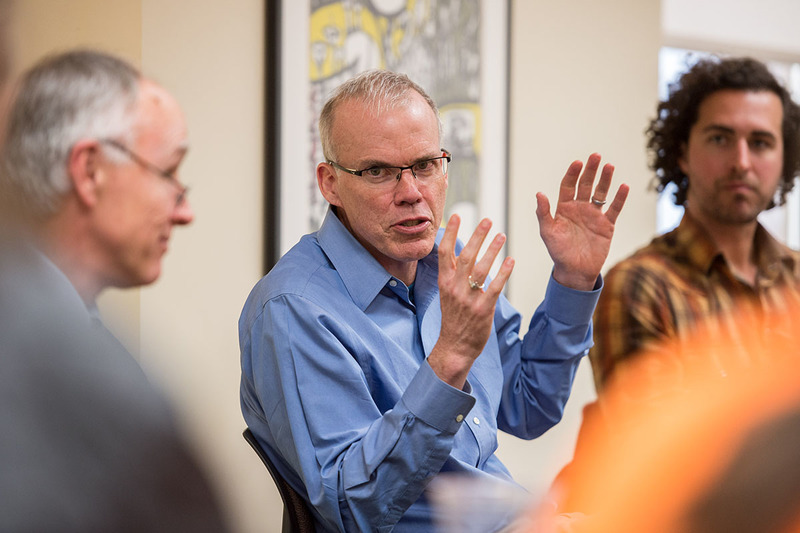 We talk a good game about living in a global world, but so far that’s mostly meant that we sell things to each other (or, in the case of the United States, that we buy things from other places). “World government,” whatever that is, seems a distant idea indeed, in a world where we can’t coerce mighty powers like, say, Myanmar to let food aid through their borders after a hurricane. Yet we have a certain number of problems that simply demand some kind of international response. That is to say, they don’t call it “global warming” for nothing.

So what do we do? How do we build some kind of international political effort to make a strong change in crucial public policy?

Let me make it less theoretical. Let me give you a number—350 parts per million carbon dioxide. In the last few months, a number of scientists, led by NASA’s James Hansen, perhaps our foremost climatologist, have said that that’s the maximum safe level for carbon in the atmosphere. Anything more than that, and we’re in the danger zone.

Since we’re at 385 ppm now, and rising by 2 ppm annually, that’s a tough diagnosis. It’s like the doctor telling you your cholesterol has gotten too high and that until you cut it down you’re at risk for heart attack—or, in the case of the planet, for unexpected surprises like last summer’s sudden, almost unbelievable melt of Arctic ice.

But really, the analogy is more complicated than that. Because if it’s cholesterol, you can take care of it yourself—stop eating fatty food. In this case, though, it’s like having to convince your neighbors to cut their cholesterol, too, even if they’ve been living on a starvation diet for years. It is necessary for America to cut its carbon emissions, but if we do it and China keeps opening a coal-fired power plant every week, then our change will do no good. On the other hand, the Chinese, per capita, produce only a quarter as much co2 as we do, so it’s hard to convince them that it’s time to reduce. And then there’s India, and on and on and on. You see the problem.

It’s the dilemma that’s bedeviled attempts to control global warming for years—that kept the Kyoto Accords too tame (though not tame enough to convince the United States to sign on). That threatens to keep the current round of international negotiations on a climate change agreement, a parley which will end in December of 2009 in Copenhagen, from really tackling the problem with the vigor it requires.

So here’s a strategy. Maybe not a brilliant one, but at least it’s a start. A few of us started plotting last year about ways we could take this number, 350, which is probably the most important number on earth, and make it also the most well-known number on earth. Now, that’s hard because it’s kind of arcane and abstract—parts per million co2 comes trippingly off very few tongues. On the other hand, it’s easily translatable; every part of the world uses Arabic numerals, which makes our job a little easier.

And we have this new tool, the Internet—which, if you think about it, really was designed for a task like this: for the insidious spread of a single idea into every nook and cranny of the earth.

So here’s what we’re trying at 350.org, with essentially no money and no big organization behind us: We’re finding people in every corner of the globe who will do things to dramatize that number. We’ve found churches that want to ring their bells 350 times, quilters who want to stitch 350-square quilts and teams of 350 bicyclists who want to go out for rides. We’ve found evangelical cartoonists and Nepalese environmentalists and Mongolian artists—and everything that they do will resonate twice. Once in their own communities—when those 350 bicyclists circled the Utah statehouse in Salt Lake City, it made all the newscasts. And once around the globe, when we use the web to spread the word and the pictures.

We have some experience with this kind of work. Last year this same crew—me and seven newly minted graduates from Middlebury College in Vermont—did something like it in the United States. The Step It Up campaign organized 1,400 demonstrations in all 50 states in support of our demand that Congress agree to cut carbon emissions 80 percent by 2050. Again we had no money and no real organization, but we found people everywhere willing and eager to take a stand—and it worked. Within a week of our rallies, both the Obama and Clinton campaigns took that 80 percent goal as the centerpiece of their energy and environment platforms.

Our hope this time is that we can change the international climate of opinion. If people everywhere, even if they know nothing else about global warming, start to equate 350 with safety, then the international negotiators will be nudged in the direction of the science and away from political expediency. That’s how human psychology works—a target has a kind of magnetic effect on people. If we can define failure, then we can avoid it. We may not exactly get success, but in the world-saving business you take what victories you can get.

It’s an easier strategy, in any event, than trying to figure out how to lobby 180 different governments—how do you affect the Botswana elections? (Or the “elections” in those countries that don’t, you know, have any.) How do you go and lobby the United Nations? You don’t, I think. You just change the background, the context.

There’s nothing easy about an international campaign. Half the places we’re trying to work in even the Internet doesn’t really reach. So we’re turning into self-taught experts on how to use text messaging on mobile phones, because you have to go pretty far back of beyond these days to get out of cellular range. And trying to drive a number into every human skull is no easy task—it took McDonald’s half a century and many billions to make their golden arches a universal symbol.

Still, given the stakes, it seems worth the effort. And everyone can help—that’s what’s so interesting about it. There isn’t a universal democracy on this planet. But there is a central nervous system for the planet all of a sudden. The net offers possibilities for a kind of Hail Mary pass. It wasn’t invented for trading dirty pictures or playing poker. It was invented for spreading this number, maybe just in time.

Bill McKibben is a scholar in residence at Middlebury College and the author of a dozen books on the environment, most recently The Bill McKibben Reader. He is a co-founder of "350.org":http://www.350.org/.