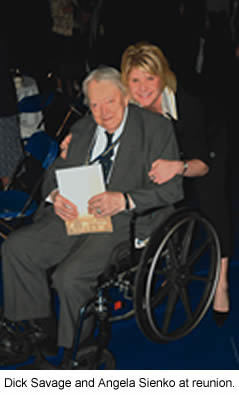 The fact that Dick Savage celebrated his 102nd birthday this past January is in itself remarkable, but his age isn’t what makes Savage so fascinating. It’s . . . well, it’s Savage himself. Because for him, 102 is the new 50.

Although Richard J. Savage graduated from Notre Dame in 1930, don’t try to find him listed in the 1930 Dome. Oh, his photo is in there, but the caption calls him “Frank Savage,” which perplexes him to this day. “Frank left school before the spring semester,” Dick says. “I don’t think he even had his photo taken.” Worse yet, one of Dick’s good friends was on the Dome staff and responsible for selecting the images. “How he didn’t catch that mistake is beyond me,” says Dick, revealing the slip of paper he has tucked into the yearbook with a note, lest he ever forget why he’s not listed.

Upon graduation, Dick Savage earned a Ph.B. — that’s bachelor’s of philosophy in commerce, a degree no longer offered that roughly translates into today’s B.A. in accounting. He has long served as secretary for his class — now the oldest living class notes secretary. He still contributes a column to each issue of this magazine, even though he has no classmates to write about. Savage’s columns these days are full of his own memories and musings, and they’re always entertaining and full of captivating details.

While most class secretaries email their notes to me, Savage sends his by postal mail. They’re always on time, and they’re always handwritten in an ornately elaborate cursive that resembles artwork more than penmanship. It’s not that he’s computer illiterate — he had an email account, but he grew annoyed with responding to all the messages that filled his in-box.

Savage, probably the oldest living alumnus (although it’s difficult to verify), regularly attends the annual alumni reunions each June. Something of a celebrity these days, he draws applause, pats on the back and handshakes from dozens of other alums in awe of his longevity. While he accepts the attention with gracious modesty, I know he secretly enjoys all the fuss.

I first met Savage three years ago when I became the alumni editor at Notre Dame. I manage the class notes section of this magazine and work closely with all the class secretaries, whose loyalty and diligence bring much to this publication and to the bonds of the Notre Dame family.

I finally had the chance to visit Savage in his Chicago home this past January. His living room is exactly as I had imagined: cozy and layered in memories. A baby grand piano displays dozens of family photos, various honorary citations and a framed copy of his summer 2009 class notes column, “because it’s on the same page as a photograph of Father Jenkins and President Obama,” Savage tells me.

There are photos of a young Savage, Notre Dame memorabilia and a copy of the congratulatory letter the ND Alumni Association sent him two years ago to honor his 100th birthday. “That meant more to me than anything else, including the birthday wishes I received from the mayor of Chicago,” he says.

Stacks of books surround him. Despite his severely compromised eyesight, a result of 20 radiation treatments he received for an eye-related cancer that was diagnosed in 2007, he remains an avid reader, thanks to the trusty magnifying glasses he keeps close by.

Savage is ensconced in what I assume is his favorite spot on the couch. As I glance over the books on the coffee table in front of him, I detect a theme: old Dome yearbooks; Do You Know the Notre Dame Fighting Irish?; Notre Dame trivia. Then there’s a book about bridge. Savage loves playing bridge. A member of the American Contract Bridge League, he used to play five days a week and participate regularly in tournaments. Lately he’s been playing once a week, though with a younger crowd. His partner is 70.

The first thing Savage wants to talk about is Charles Goren, a world-champion bridge player and bestselling author who contributed significantly to the development of the game. Savage tells me he used to play with Goren, and the book on his coffee table is a worn copy of Goren’s book Goren Settles the Bridge Arguments.

“I can quote every word in it,” Savage says. “Charles was a great teacher.”

Another favorite topic is the Chicago Cubs. Savage was 10 months old the last time the Cubs won a World Series, using his 102 years to stress how long it’s been since the Cubs reached the game’s pinnacle. He can recall, though, when his father, Walter, took him to Game Three of the 1918 World Series.

“I remember it like it was yesterday,” Savage says of the matchup between the Cubs and the Boston Red Sox. Because of its larger seating capacity, the game took place at Comiskey Park — the home field for the crosstown rival White Sox — instead of the Cubs’ own Weeghman Park (later named Wrigley Field). Although Boston’s Babe Ruth did not pitch in that game, the Red Sox did beat the Cubs — a disappointment Savage still feels.

Savage rummages through his books and produces a tiny black-and-white photo of Cubs shortstop Charlie Hollocher preserved in Plexiglas. “They gave this out at the ballpark at that game,” he says, “though I have no idea how they got it in the plastic.”

A few years ago Savage was featured in an ESPN video documenting storied Cubs fans, but says he’s a bigger Notre Dame fan. Since his undergraduate days, ND football is Savage’s passion. He makes it a point to attend at least one game every season, usually the designated “Senior Alumni Game.” Like Reunion, his track record for Senior Game attendance spans decades.

Savage makes the two-hour trip from Chicago to South Bend with one of his daughters, Florence, age 78, and his “baby brother,” Don, age 92. Like most Irish fans, Savage and company take part in the widely recognized game-day tradition of tailgating prior to kickoff, something he says is a natural part of the experience. Despite his compromised eyesight, Savage is still a watchful and wise football connoisseur.

As with most Notre Dame fans, Savage has a favorite coach. His is Knute Rockne. But while most choose Rockne based on the lore and movie-worthy quotes, Savage’s reason is different — he knew Rockne. During his junior year Savage lived in a University-owned house on Notre Dame Avenue, not too far from the Rockne family. “I’d pass him on the street every day walking to and from campus.” Savage smiles as he remembers. “And without fail, anytime I was with my friends, Coach Rockne would always greet us the same way, ‘Hi, men.’ That amused me because, you know, obviously we were only boys.”

As for the famed Gipper pep talk Rockne delivered to his weary players during the 1928 Notre Dame-Army game in Yankee Stadium? Savage was at that game. “I had a friend who lived in Brooklyn, so he said I could stay at his place for free,” Savage says. “So I just jumped on the train with the football team and headed east.”

While the locker-room speech is the most famous event that came out of that matchup, Savage remembers it for an entirely different reason: He got in trouble when he returned to campus. “I had to skip some classes to make the train to get out to New York,” he says. “I missed a test.” His parents weren’t amused by his stunt, even though he was eventually allowed to take the exam.

Savage hadn’t originally planned to attend Notre Dame. “I was supposed to go to a different college, but my cousin, Bob, was about a half year behind me in high school, and our dads wanted us to go to college together,” he says. “Bob was going to Notre Dame, so that’s where I went, too. We were roommates our freshman year in Howard Hall.”

In 1926, the year Savage entered Notre Dame, there were no application requirements. “All I did was show them my high school diploma and pony up the cash, and I was in.” He estimates his tuition, room and board totaled about $1,000 for the year — including spending money.

Between his sophomore and junior year, Savage attended a back-to-school party thrown by a friend in Chicago. At the party he was introduced to a young woman named Eleanore. “It was love at first sight,” he says. “At least it was for me.”

Eleanore, a talented pianist, attended a Chicago-area music school. She and Savage corresponded by mail to fill in the gaps between holidays when Savage would return home. Immediately after he graduated, they were married.

The couple built a long and happy life together. Dick earned a living as an accountant specializing in tax work, and Eleanore stayed home to raise their seven children, six daughters and one son. The Savages were married for 60 years before Eleanore died in 1990. Savage has never remarried, though he says he’d consider it if I said “yes.” (I haven’t ruled it out.)

Savage lives in the same Chicago home he’s owned for 61 years. He lives alone, though his daughter, Florence, spends time with him each day. When she leaves for the evening, Savage speaks with her via cell phone until she’s safe inside her house, which is a few minutes from his own.

When he isn’t playing bridge or writing his class notes column, Savage works crossword puzzles and watches ESPN. Most nights, he is up until midnight, and he tends to sleep late in the mornings. That’s about as bad as his “bad” habits get. “I suppose I live a life of moderation,” he says.

Our conversation eventually turns to his longevity. “I never thought I’d make it to this age,” he says simply.

Maybe that’s because Savage was diagnosed with the flu in 1918 — the year the Spanish flu took 50 million lives, including two of his aunts and two cousins. “I was just a little kid, and I can remember my mom and dad standing at the foot of my bed talking with the doctor,” Savage says. “I thought I was a goner. But apparently the good Lord wanted to keep me around.”

“Obviously He wanted us to meet,” I tell him.

“Any other secrets to living a long life?” I ask him.

Angela Sienko is the alumni editor for this magazine and the Notre Dame Alumni Association.