Some people claim the Notre Dame campus is magical. They say it radiates an inimitable spirit that at times can cross into the realm of the mysterious. As a freshman, I learned firsthand that this belief lurks not far from the truth.

My Christmas surprise — or the “Christmas miracle,” as my roommates and I came to call it — occurred on a Thursday evening in December 1992. Orchestra rehearsal had ended, and I was leaving the band building to begin my long trek across campus to Lyons Hall. With fingers numb and mind ruminating on approaching finals, I trudged through the inevitably bitter wind, encountering no fellow travelers along the way. Campus seemed almost desolate. 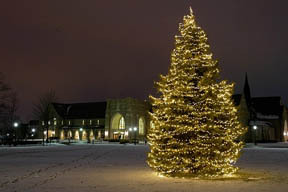 That is, until I reached God Quad. As I walked past the statue of Jesus, loving as I always did the feeling of being embraced by his outstretched arms, I stumbled. Literally. I had tripped over a dark shadowy mass that, upon further inspection, turned out to be a Christmas tree.

“This must be a joke,” I said out loud. And yet, looking around, I didn’t see anyone who appeared to have misplaced a Christmas tree. I crouched to investigate. The tree was fake, no more than three feet tall, and in seemingly exceptional condition. I carefully stood it upright and noticed that it was strung with Christmas lights. Inexplicable.

“Clearly, you need a home,” I said to the tree. I had not a clue why this little Christmas tree was sitting in the middle of God Quad on a December night, but I was not going to leave it there. I attempted to sling it with grace over my shoulder and then marched the rest of the way home to Lyons. The stare or two I received from passersby did not deter me from my purpose. I felt chosen, responsible and in awe of this tiny gift that had been placed directly on my path.

When I made my grand entrance at Lyons, eager to share my discovery, my friends looked at me in confusion. When a roommate goes off to orchestra practice, it follows that she will return home with flute in hand as opposed to Christmas tree. But, in the indomitable spirit of Notre Dame, anything is possible. Including the fact that, after we plugged in the string of lights, they worked perfectly.

After dreading but never finding an ad in the Observer ("Lost: small Christmas tree; last seen on God Quad; please call..."), I displayed my tree with pride—not just that year but also the three Christmases to follow. Whenever I pulled it out from dorm storage, I forced whoever was around to listen to my tale of magic, looking fondly upon my Christmas mystery.

The tree has followed me from Notre Dame to life beyond the Dome, accompanying me through the predictable life changes of a young alum. For years after graduation, when I was living in apartments that prohibited real trees, the tree served as the focal point of my Christmas decorations, sitting in my front window and shining delicately onto the snow outside. Last Christmas, however, as a new homeowner, I was able to buy a real tree, tall and fat and smelling of pine. And so my little tree was relegated to the basement rec-room—yet never losing the aura of importance and beauty with which it entered my life 11 years ago. I pray that someday soon it will grace the room of a small child, lucky enough to fall asleep under its gentle glow. After that, who knows what my little tree might watch unfold.

My Christmas tree remains far more than what meets the eye. It represents my time at Notre Dame, conveying a rush of memory and love each year I decorate it. It conjures up more yearning for college than my yearbooks or photo albums or diploma. It reminds me of old friends and laughter in Lyons Hall, of the winter splendor of campus, and of the blissful privilege of calling it home, even for a mere four years.

During Advent, amidst the bustle of holiday shopping and baking, it calms me to stand in front of my little tree and simply pay attention. If I stop there long enough to quiet myself, I can sense God’s very tangible presence in my life and in the Christmas season. If I close my eyes, I am able to hear the hush of the wind on God Quad, hundreds of miles away. I listen to it sweeping up the brick walls of the basilica and over the Golden Dome, reaching through the night and traveling to places untold.