As he processed toward the altar on the steps of Bond Hall to celebrate the academic year’s opening Mass, Notre Dame President Rev. John I. Jenkins, CSC, ’76, ’78M.A., wore walking shoes under his vestments.

Running shoes, to be more precise, but their purpose on August 26 — like the purpose of August 26 — was to walk. Before Mass that morning, Father Jenkins led about 3,500 people along the final three miles of the Notre Dame Trail from downtown South Bend to campus.

The journey started two weeks earlier in Vincennes, Indiana, where 32 “core pilgrims” — the missing “hard” in front of “core” is implied — took the first steps on the 320-mile trail. Their physical and spiritual mission: to commemorate Father Edward Sorin’s trek across the state to found the university now marking its 175th anniversary. 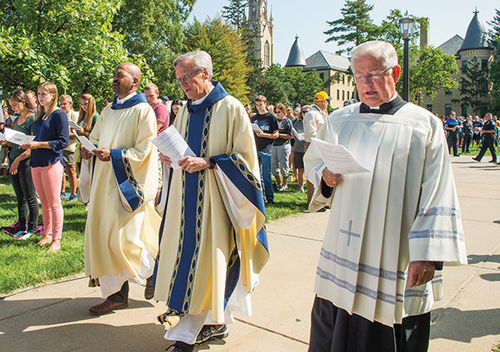 The end of the trail. Photo by Barbara Johnston.

Among the core 32 was Brother Larry Stewart, CSC, ’60, ’61M.A., an exercise physiologist by training and a man familiar with extreme physical exertion. He’s been across the country twice by bike, celebrating the 40th and 50th anniversaries of taking his vows.

This year marks his 60th. Brother Larry, 80 years old, was inspired in his latest effort by Sister Ruth Marie Nickerson, CSC, former area coordinator for the Sisters of the Holy Cross.

Sister Ruth has hiked Spain's Camino de Santiago and her “one foot in front of the other” messages helped motivate Brother Larry along the Notre Dame Trail.

“Trying to emulate her, doing something vigorous and especially prayerful,” he said. “I didn’t carry the rosary, but I would count the beads on my fingers as I was walking along.”

As far as the more earthbound matters, medics tended to blistered feet and massage therapists soothed aching muscles. Buses — which the walkers called “ox carts” in homage to the vehicles that carried the gear for Sorin’s entourage — ferried them from each day’s finish line to their hotel to the starting line the following morning, where the next leg of the journey stretched out ahead.

They made it. After 12 grueling days covering distances from 15 to 41 miles, the festive atmosphere of the ceremonial home stretch in South Bend must have felt like ambling through a neighborhood block party.

It started before 8 a.m. that Saturday morning at Howard Park, along the St. Joseph River downtown. Bright, cool weather and music from the Notre Dame marching band greeted the thousands gathering for the walk to campus — a perfect October football Saturday transplanted into August.

“As you know,” South Bend Mayor Pete Buttigieg noted in his remarks before the walk began, “it’s like this all year ’round.”

In November 1842, Father Sorin and the seven Holy Cross brothers who accompanied him trekked 11 days through snow and cold to reach the land he would call Notre Dame. They needed “no little courage,” Sorin said, to embark in such daunting conditions.

In weather, provisions and available masseuses, the 32 pilgrims retracing Sorin’s entire path had the better of the circumstances. What their effort symbolized, Buttigieg said, was the courage to carry forward Sorin’s vision. To follow his example, not only his footsteps.

Father Jenkins, who walked the first two days before returning to campus for the start of the academic year, found meaning in the community the walkers formed on the Notre Dame Trail. From the core 32 to the groups who joined them for the final five and three days, to the thousands along for the last few miles, Jenkins sensed a collective spirit.

“It wasn’t just a physical challenge, it really was a spiritual journey. That’s what these walkers made it into, a reflection on our life together, our journey together, our walk together,” Jenkins told the throng. “That’s what’s important. We’re walking together.”

And off we went, led by Jenkins and the core pilgrims with the walking sticks they received the night before to commemorate their two weeks on the trail. The band members fell into ranks behind them, followed by those of us along for a one-day stroll through town.

Everyone picked a stone from wheelbarrows full of them to place in a new rock bed outside the Log Chapel when they arrived on campus. The idea, drawn from a tradition on the Camino, is to create a new way to express prayerful intentions.

The 32 pilgrims who had to cross more than 300 miles of Indiana attracted a lot of enthusiastic company for the final three. Families with excited young children — at least a couple of whom begged to push the strollers that otherwise would have been their personal carriages — and lots of friendly dogs kept the mood boisterous along the way. Uniformed scouts from local troops wondered if there might be a badge in this hike.

From the middle of the pack extending along narrow Niles Avenue, passing by Corby’s and Sunny Italy, the front and rear of the crowd were too far away for the eye to see. Moving from the street to the East Bank Trail, bottlenecks slowed the pace, but nobody was in a hurry.

The route snaked behind the old St. Joseph’s High School, now demolished, and across the Holy Cross College campus to Indiana 933, Notre Dame’s western boundary. From there, the walkers turned onto St. Mary’s Road, leading them past the Holy Cross Community Cemetery, where Sorin and his companions on the original trek are buried.

Everybody paused among the headstones. Photographs identified the plots of Notre Dame’s original eight pilgrims.

Sunlight filtered through the leaves sheltering St. Mary’s Road for the final steps to the Grotto. Then onward to the Log Chapel to place stones, followed by Mass on the lawn outside Bond Hall.

“I’m a sentimental slob,” Brother Larry said. “I get goose pimples and I’m tearful on occasion.”

Occasions such as this one. He had a similar reaction to the news that he’d be among the representatives from the core group presenting the American flag at the Notre Dame-Georgia football game.

Katherine Lane, director of the Notre Dame Trail — or, to paraphrase Brother Larry’s summary of her job description, the cheerful logistical magician who made every step possible — asked if he could be part of the pregame ceremony.

“I’d be honored, but only on the condition that I walk behind you,” he said, deferring to the incalculable amount of work Lane did, starting more than a year before the pilgrims took a step. “She said, ‘No, you’re walking beside me,’” as fitting a sentiment as any for what the Notre Dame Trail symbolized.

The final day’s celebration concluded with a picnic on South Quad. Filled from end to end, from the Rock to O’Shaughnessy, with food tents and tables, live music and games — beanbags flying, giant Jenga pieces falling — there was a carnival atmosphere.

There was also a lingering solemnity, an air of quiet contemplation — maybe fatigue from all those miles, maybe a hint of the “silent pondering of Mary” suffusing the campus that Jenkins referred to at Mass.

In his homily, he expressed the importance to the Notre Dame character of making room for hushed reflection in the midst of the academic, athletic and extracurricular hustle that had only just begun. It’s a lesson from Mary herself, who says so little in Scripture despite looming so large in the Catholic imagination, passed down to the gathered congregation and the extended campus community from Sorin, who so revered her that he named his school in her honor.

“That silence invites us and gives us a space to pray and reflect,” Jenkins said. “It calls us — in the midst of all our important work, strenuous debates and many activities — to pause and prayerfully ponder the mystery of God’s love, and what that love demands of each of us: to love in return.”

What better way to find that space, to retreat from the noise toward a place of peaceful reflection, than a long walk.