While the word “barefoot” seems most relevant to college students in the context of a grocery aisle deliberation between rosé and Riesling, to Thom Behrens ’16 barefoot became a way of life.

I met Thom, a computer science major at Notre Dame with a thick, blonde beard, at a swing dance class on campus a couple of years ago. His feet moved quickly as he demonstrated the Charleston. I continued to see him around campus, his feet moving slower than they had in the ballroom — and usually without shoes. 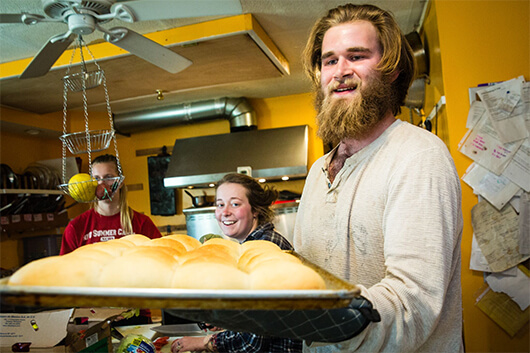 A Notre Dame-sponsored Summer Service Learning Program in Kansas City the summer before Behrens’ junior year prompted the wardrobe purge. The former Duncan Hall residence assistant taught science at a Boys and Girls Club and stayed at Jerusalem Farm, an urban community rooted in Catholic intentionality. Jerusalem Farm works to transform the lives of those living on the farm and in the surrounding city through sustainable living, home repair projects and hosting 16 to 20 service retreats each year.

“The people there believed what I believed and were living it,” he says. Before leaving that summer, Thom told the farm staff he would be back.

“I knew it was what I was supposed to be doing,” he says. “This life of simplicity where I could be a Christian in everything I did.” He took that mindset back to campus junior year, sans shoes in the warmer months to remember the deep connection with the Earth that he had experienced through the farm’s emphasis on simplicity and sustainability.

“I wanted to make sure that I always had in my mind the idea that the Earth is holy ground and sacred because it was created by God. . . . It is a way to treat reality as something to be cherished instead of something you need to make a list of checkmarks about,” he says.

As a college senior, I agree that sometimes life can resemble a to-do list:

My planner is scheduled to the hour, and crossing things off the list acts as motivation. To Thom, intentionality meant more than a checkmark — a realization he came to during his college years. He reflected on the importance of an “internal ideological consistency.” To him, that meant beliefs that should uniformly resonate in your politics, your major, the language you choose to use, the books you read, the music you listen to, the food you eat and your choice of (or lack of) footwear.

“In college sometimes, what you’d think [might have] conflicted with what you did, how you acted, how you voted, how you spent the weekends.”

In Thom’s case, what he thought started to conflict with the future he had signed himself up for: a position at a cyber-security consulting firm in Boston, a major hacking capital.

In the spring of Thom’s senior year, the firm pulled his relocation money from their offer. It served as a sort of sign, or really an excuse, to try something else. After a tear-filled discussion with his dad, who said he didn’t care how much money Thom made out of school (a false impression that Thom admitted had been ruling his life), Thom took a hitchhiking trip. From a Buddhist monastery stay in Bloomington, Indiana, to a ride across the state from a landscaper working for CEOs and NFL players in the wealthy North Meridian Street District in Indianapolis (quite a lucrative job), he heard tales about the options the Career Center pamphlets ignore.

Thom skipped the “corporate job” checkmark to continue his barefoot existence as one of the seven full-time members at Jerusalem Farm, starting last September. Now, instead of coding he cooks: As House Manager at the farm, Thom averages four-hour preparations for meals that are served to farm staff, student retreats and local missions.

“Eating is one of the few things we do every day that is essential to life — and we shouldn’t be taking for granted things that are essential to life so we can do all this other stuff that we don’t need to be doing,” he says.

Jerusalem Farm is focused on intentionality, or focusing on the tasks at hand and only those that are productive. This mindset is based in the farm’s four cornerstones: community, prayer, simplicity and service.

“It means we work to live out those four concepts in everything we do — in decisions we make as a community, but even in small decisions we make as individuals,” Thom says, listing home repair in several Kansas City neighborhoods and retreats as embodiments of the cornerstones, but also eating vegetarian, not cutting one’s hair and sleeping with the door open.

The farm is rooted in sustainability, a concept that, in Thom’s words, means “how to exist, not how to grow.” The farm runs on solar power, its workers manage local composting programs, and the in-house flushing rule is “if it’s yellow, let it mellow.”

A major project for Jerusalem Farm is building a high-efficiency, eco-friendly house for the community members to live in, so they can utilize their current place entirely as a farm and community space. The staff members are constructing the new house themselves, working off donations from constructions companies, community groups and individual pledges.

Among the farm’s sustainability roles is Thom’s work for food justice: Beyond the asparagus, zucchinis, peaches, carrots, peppers and other crops they grow on the farm, the staff works to maintain companionship with the Earth through saving food from waste — according to Connect magazine, 20 percent of U.S.-grown produce is deemed too ugly to sell and goes to waste each year. Thom visits local grocery stores every week to pick up food that would otherwise be thrown away and takes it back to Jerusalem Farm to find a use for it.

A common find among the saved foods is strawberries, a few of which might be moldy. He finds the process of sorting through the lot and preparing jam satisfying. Life on the farm overall has felt this way to Thom, as he lives in anticipation of a cooled Mason jar’s lid pop instead of a delayed business trip flight.

Other community projects that Jerusalem Farm organizes include Spanish/English classes, open-door community dinners, a Bible study/“radical book club” and even a sacred dance group (where Thom is able to showcase his Notre Dame Swing Club chops).

“There’s a sense of self-assurance at Jerusalem Farm, all of my peers are at home in themselves. I fall asleep easily every night.”

Erin McAuliffe is this magazine’s intern for the spring 2017 semester.