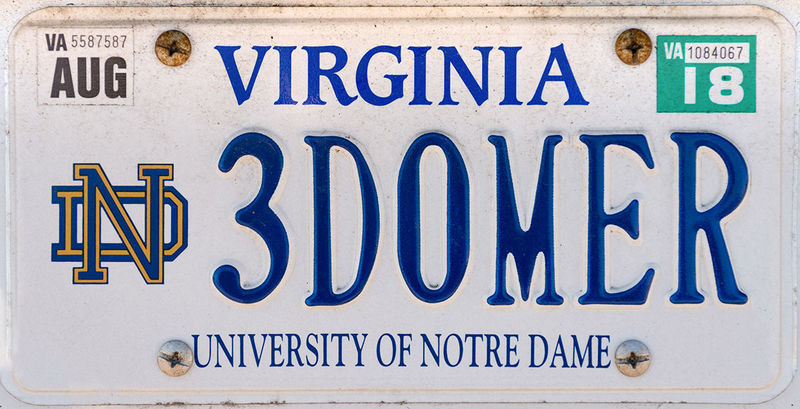 Look, I know. The Irish are 12-and-a-half point favorites over Virginia this weekend. It’s the first of nine must-win games if Notre Dame is to have its shot at the college football playoff. And I love Notre Dame football. I wear blue and gold every fall Saturday. I attended every home game during my short-lived grad-student days in the Bob Davie late ’90s, and I’ve cruelly stolen from the mouths of my children so I could sit in the stadium at least once every year since I came back to work here at the magazine, 13 seasons ago.

But I won’t be cheering for Notre Dame this Saturday.

Surely you remember cackling about the deflated Virginia Cavaliers fan who draped himself over the low brick wall in Charlottesville back in 2015, his crushed spirits flowing from his seemingly lifeless body. Maybe you replayed that moment on your DVR. First the 39-yard touchdown pass from then-backup quarterback DeShone Kizer to Will Fuller with 12 seconds left, then Kizer racing downfield with his arms raised in victory, then — and God help me I don’t know how they picked that poor kid out of the crowd so fast — the student shot dead with grief, his body neatly hung over the sharp-edged concrete like an old overcoat, the “GoHoos” on his bright orange shirt become a mockery of forbidden glory. It’s an icon of loss. How could you forget it?

I haven’t. That student could’ve been me. I took my degree from the University of Virginia in 1995.

I was at a wedding in South Bend that afternoon. I said nothing about the game at the reception, not even during halftime when the Wahoos hit the locker room with a two-point lead. I wasn’t even happy about that. Are you kidding me? No way my alma mater’s perpetually mediocre football team would pull it off. But I fought with my smartphone for half an hour so I could watch the game. And my choice — I thought I was being subtle, I really did — to wear my orange-and-blue diagonally striped UVA tie ensured persecution throughout the third quarter as the Irish scored two touchdowns, and one fan after another found me on the dance floor to rub in the inevitable.

Then UVA answered in the fourth, and we — sorry, yeah, we — were up by one thin point with a minute or so to play.

Even then I didn’t believe. I couldn’t. Too good to be true. Too easy for Justin Yoon to bang in a 40-yard game-winner. But as the seconds ticked by I started to eye the door in case the inevitable somehow gave way to the unthinkable.

I should’ve bounced regardless. When Kizer found Fuller I became a lightning rod for the shockwave of Irish glee crackling through the reception hall.

Can I ask you to understand my allegiance? Probably not. 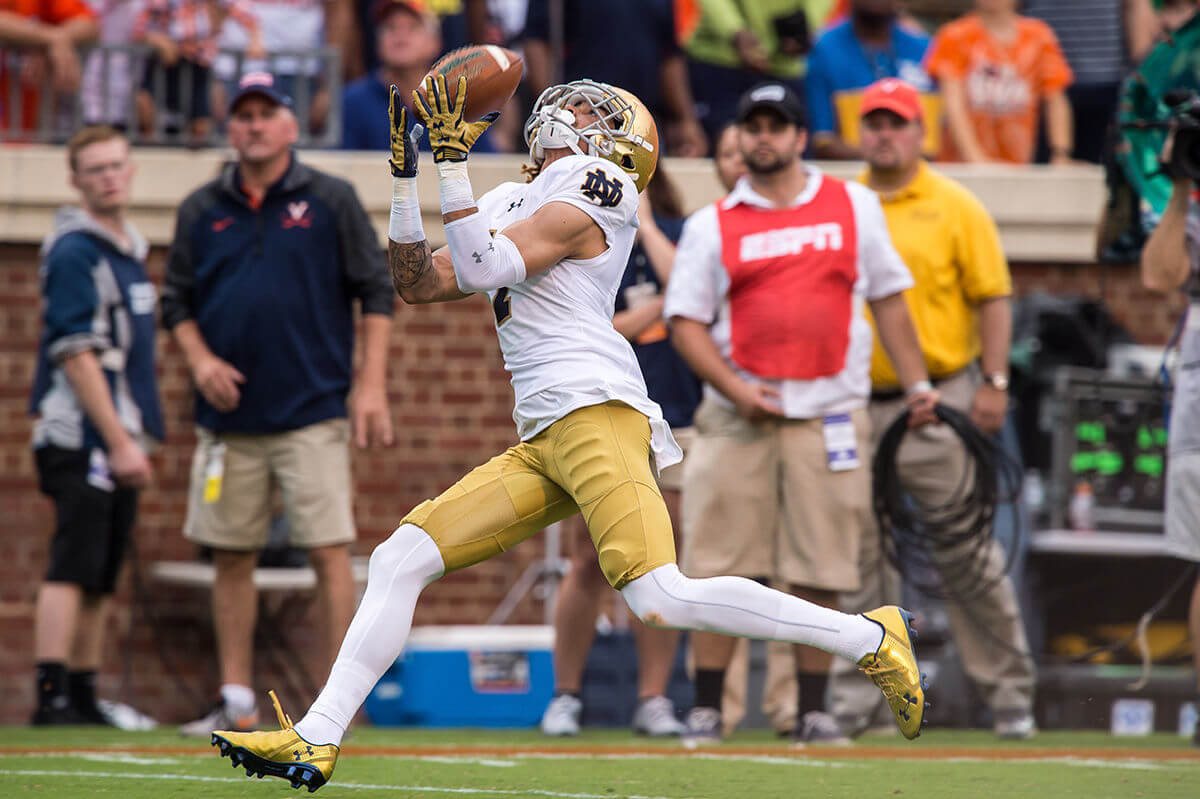 The Virginia Cavaliers became my forever team on that hot August afternoon in 1991 when I moved into Watson Hall and walked with my new best friends to the University’s official welcome on the Lawn. We filed into the rows of folding chairs set up on the grass to face the white marble steps of the Rotunda. We turned reverently to see the Blue Ridge rising over the rooftop of Old Cabell Hall, down there at the green lower end of Mr. Jefferson’s stately Academical Village, and felt our collective breath being gently taken away.

Virginia football wasn’t bad back then. Let’s call it the waning gibbous moon of the George Welsh years. You could count on George most of the time for eight or nine wins and a bowl appearance. There’d been no shame in the 1989 season-opening loss to No. 2 Notre Dame in the Meadowlands — it was a milestone simply to have reached the big stage. A much bigger deal was the 20-7 home win over the top-10 Clemson Tigers in 1990. Fans swarmed the Scott Stadium field, hauled down the goalposts and — legend has it, as passed down to us first-years the following autumn — carried their battered aluminum remnants up Jefferson Park Avenue, toward the bars on the Corner. Virginia hadn’t beaten Clemson in 34 years. Which is to say, ever.

Of such frothy moments is the Cavalier’s definition of football success made. Not in national championships, but in more modest accomplishments like Thanksgiving-weekend Commonwealth Cups, the season-defining contest with Virginia Tech. We haven’t won one of those since my son, a Notre Dame sophomore, was 4 years old.

By then I held a master’s degree from Notre Dame. Ever since I’ve enjoyed cheering for two schools I could be proud of, two programs that generally do things the way they should be done. Two teams that hardly ever played each other. (That helped.) But now here come my Wahoos for their first-ever appearance inside Notre Dame Stadium. What to do?

Please understand: My father raised me on meat, potatoes and undying loyalty to one’s undergraduate school. Easy for him to say. He went to Hamilton College.

Yes, I’m cheering for Virginia this Saturday. Yes, I am going to wear my white T-shirt with the orange V on the pocket and the back. And yes, it will be painful. I’ve never wanted to feel like a tolerated visitor in Notre Dame Stadium. I may have to find a restroom mirror to give myself the stink eye. Four of my children were born in Virginia, four here in South Bend. All of them will be pulling for their mother’s school. My oldest will text insults from the northwest corner of the stadium. And when Notre Dame comes out on top his brothers and sisters will pull me to the ground and jeer and laugh and tap-dance impishly all over my disappointment.

On Sunday morning, they’ll be UVA-friendly all over again. And I’ll slink back to Notre Dame, fingers crossed you’ll take me back.

Unless . . . the unthinkable comes to pass.

Two solid, ranked football teams will play each other this weekend. Notre Dame wins, it’s just another Saturday in South Bend. Virginia wins, it may be the biggest moment in program history. I won’t know how I’ll feel about that until it happens.

Of course I want Virginia to win. I just don’t want Notre Dame to lose. Do you cheer with your heart or your soul?