The camera’s viewpoint enters the ruin of a crumbling stone structure, then rises straight up in the air to give a surprising look at the house’s location on a windswept slope down to the sea.

In the latest collaboration between anthropologist Ian Kuijt and videographer William Donaruma, both Notre Dame professors, a drone equipped with a camera offers a bird’s-eye view of the ethereal, rock-strewn beauty of a pair of Irish islands that can seem like last outposts of western civilization being battered by the Atlantic Ocean. 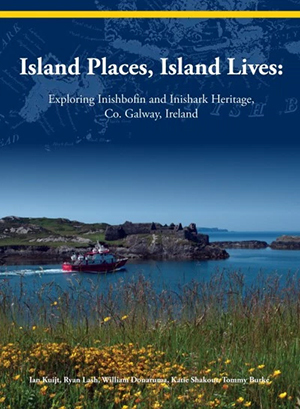 “It’s extraordinary what the drone can do to convey a sense of scale, which was always so hard to capture before,” says Kuijt, who has taken groups of students to the County Galway islands off the western coast of Ireland for nearly a decade.

Kuijt’s research teams have been collecting residents’ stories, archeological evidence and historic records on Inishbofin and Inishark as part of a project called Cultural Landscapes of the Irish Coast. I joined them in 2012 for a story called Off the Coast in Notre Dame Magazine.

We gathered again last week for the campus launch of their new video book, Island Places, Island Lives: Exploring Inishbofin and Inishark Heritage. Collaborators on the project include two former students and a local resident. There was an Irish launch of the book in mid-September on Inishbofin, which – unlike the evacuated Inishark – still has a few hundred full-time residents.

Speaking before a group of about 60 people in the Hesburgh Library’s new Center for Digital Scholarship, Kuijt and Donaruma showed video footage from the islands on a handful of screens and talked about the technology that made this book possible.

Tom Bartlett, a renowned Irish historian from the University of Aberdeen in Scotland, attended the launch and put it this way: “Islands are special, and they’re often seen as sacred places. This work doesn’t seek to romanticize them. But it shows the sensitive way man and landscape connect … This work is a timely reminder of what we have had and what we could use.”

The 70-page print book contains brief descriptive text and striking still photography. Many of the photos contain an embedded code with a play button. Readers can download an app called Aurasma to their smartphone or tablet and point at pictures to launch the 22 videos that bring them to life. Each video is about two minutes long and explores the history, archeology and heritage of the islands.

The truth is, I’d seen this technology years before on an advertising flyer. At the time, I wasn’t impressed. The app took a long time to download, only to show me a gussied-up video version of the print ad. It seemed like a perfect example of a technology that was cool but worthless.

Now, I think it just needed the right vehicle. The download time is offset by the large number of videos available. Rather than repeat the text, the videos take the reader deeper into island life and give readers a feeling of being there. It brought me back to the place where a wind-wizened people found joy and sustenance in a life both primal and beautiful. And to the warm pub where I sat with a Guinness and good people to hear their stories.

Brendan O’Shaughnessy is a communications writer at the University of Notre Dame.