Pat Terrell 90’s phone will buzz with text messages today. People on Facebook will tag him in photos and posts. They will remind him of a moment frozen in their minds, Terrell jumping, arms extended, batting away a Miami Hurricanes pass.

Meanwhile in a Chicago suburb, amid a bustling morning of making breakfasts and school lunches, Terrell will take the handoff from his wife. Three of their five children will pile into the family SUV. Terrell will pick up a few of the kids’ friends and drive the bunch to two different schools. Nobody ever pictures the hero driving the carpool, but that’s the reality.

To legions of Fighting Irish fans, Terrell will always be a legend. He’s the guy who made that play when Notre Dame upset the No. 1-ranked defending national champion Miami Hurricanes. 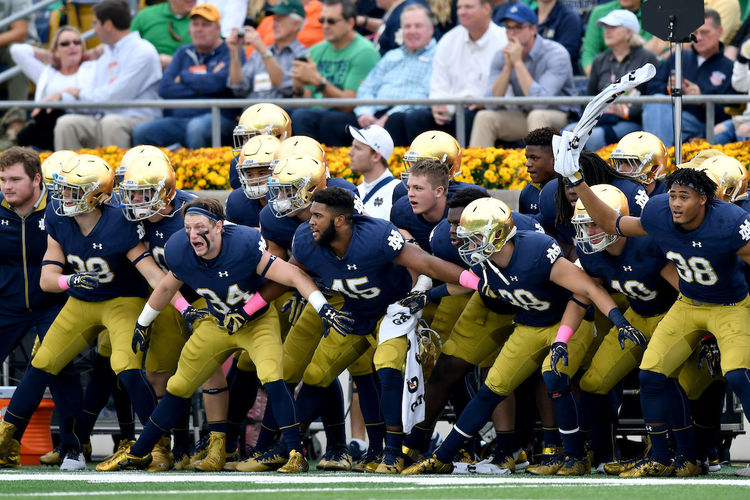 The Irish prepare to face off against the Miami Hurricanes in 2016. Photo by Matt Cashore '94

Thirty years ago today, on that warm sunny afternoon, I was an 11-year-old standing on a wooden bleacher in the 59th row of the 60-row student section. My bare chest had been painted with a No. 42 for Michael Stonebreaker '90. I had flown out to the game alone on Piedmont Airlines, even traversing the Pittsburgh airport to catch a connecting flight. I stood in those stands next to my brother, who was a senior. With less than a minute left to play, Miami scored a touchdown to cut the Irish lead to 31-30. The Hurricanes decided to go for the win and attempt a two-point conversion. As Miami lined up, I reached down into one of my tube socks and pulled out an Immaculate Heart of Mary medal. My grandmother had given it to me to keep me safe during my travels. Praying for Notre Dame to make the stop, I held that medal with both hands and pointed it toward the south end zone. There, Terrell answered my — and I’m guessing a lot of other Notre Dame fans’ — prayers. He knocked down the pass from Miami quarterback Steve Walsh. The Irish beat their vaunted foe and went on to win the national championship.

There were so many big plays in that game: Frank Stams '89’s sacks of Walsh, Chris Zorich '91’s fumble recovery, the Irish stopping a Miami fake punt, Tony Rice’s touchdown, Rice’s long pass to Ricky Watters, walk-on Pat Eilers '89’s stumbling two-yard scoring run, and even Terrell had another big play. He returned an interception for a touchdown.

But the play people remember is Terrell getting between Miami and a converted two-point conversion that would have won the game for the Hurricanes.

Years later, Terrell loves that he has a place in Notre Dame football history, but he doesn’t have October 15 marked on his calendar. He knows it’s that day when the messages start coming in on his phone.

“It’s awkward sometimes. There were so many heroes and so many big plays. I didn’t win the game. It was just the climax of a huge afternoon of great plays,” Terrell said. “It’s funny because there will be times I get ‘what if’ thoughts in my head. ‘What if I blew that play.’ It’ll make me nervous.”

In recent years, that game has been spotlighted in books and, most notably, a documentary film.

On Thursday, Terrell introduced the ESPN 30 for 30 film about the game, Catholics vs. Convicts, at a screening in the Duncan Student Center. He sat in the bleachers and watched it next to his son Seth, who is on the Notre Dame rugby team, and his daughter Veronica, who is a freshman at St. Mary’s College.

Terrell’s children joke with him about his story in the film. Terrell came to Notre Dame as a quarterback and was quickly moved to wide receiver. After dropping a perfect pass in practice, Notre Dame head coach Lou Holtz jettisoned him to a backup role on defense.

A lot of life has happened since Terrell made that play against Miami. He played nine years in the NFL. After that he became a commercial airline pilot. He married his college sweetheart, Beth Kavanaugh. She likes to joke that she started dating him before he was a hero, when he was a benchwarmer trying to find a position. They have five children. Now, Terrell owns and leads Terrell Materials, which manufactures concrete for runways and highways. To his family, he’s not the legend leaping in the air, his 20-year-old six-pack abs on display as he deflects the Hurricanes’ two-point conversion. To them, he’s their dad and husband.

“The only one in the family that reminds them that I played football is me,” he says. “For them, they think, ‘Well, it was different back then. Everybody played.’”

A couple years ago, on the Friday before Catholics vs. Convicts made its TV premiere, Terrell was in his usual morning spot: the driver’s seat, shuttling his eighth grade twins Luke and Cece and his sixth grader Eli and their friends to school. Cece, the DJ, took a break from playing Michael Jackson, and Terrell turned on ESPN radio. The hosts were talking about Catholics vs. Convicts. Terrell turned to his passengers. “You should check this out Saturday. It’s going to be good.”

Fast forward to Monday morning. Terrell waited for the reviews. He wanted to hear how his football-star exploits, now captured in a documentary that was watched by 2.1 million people a couple days earlier, were received by his morning riders. He figured they might say something first. Finally, he broke. “What’d you guys think?”

Silence followed for a few moments. Then chuckles broke up the quiet. Wait a second. What’s going here? Terrell thought. He asked about the laughter.

A debate ensued. It wasn’t exactly Miami versus Notre Dame. It was sixth and eighth graders against a former NFL pro. Terrell explained that he had scholarship offers to Florida and Minnesota as well as Notre Dame. It didn’t matter.

He lost the debate. Now, in the family’s annual Thanksgiving Day game, guess who never gets the ball thrown his way? The hero. That guy who drives the carpool, the one who stopped Miami and paved the way for Notre Dame’s national title.