Let me come right out and say it: I don’t have a great story of my own to share about Father Hesburgh.

I came to Notre Dame as a graduate student in the history department in 1997. I knew nothing about him. If they had asked me to write an admissions essay evaluating Father Theodore M. Hesburgh’s role in American history, they’d have justly offered my place to someone else.

I’ve since had a few ennobling encounters with him, for which I’ll be forever grateful. And it’s impossible to spend any amount of time around Notre Dame people and not get to know Father Ted. It seems like everyone has a story to tell. Here’s my new favorite, told at last night’s sparkling and cathartic memorial service at the Purcell Pavilion by former Wyoming Senator and honorary Domer Alan Simpson. 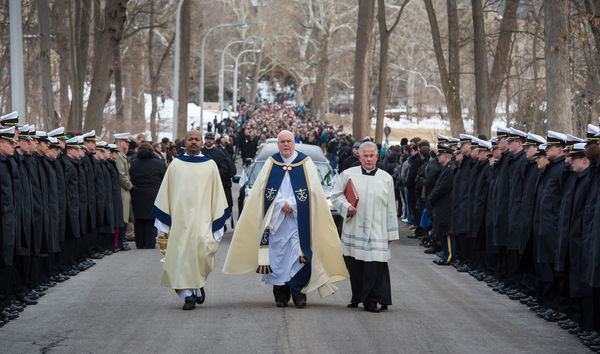 The two men served together as President Jimmy Carter’s appointees to the Select Commission on Immigration and Refugee Policy. Simpson puts it best: No one ever gave Father Ted soft issues to deal with. They “always turned him loose into areas filled with emotion, fear, guilt and racism.” But he had a “marvelous way to defang things” and the ability to laugh at himself.

One evening, after sparring with a galling adversary “who was at his most diabolical that day,” the pair returned to Simpson’s senate office and Hesburgh composed himself while Simpson poured them each three fingers of bourbon. Father Ted proposed a toast: “To good fellowship, friendship, the joy of working with you, and the sometimes real strain of praying for that son of a bitch.”

Well, Notre Dame toasted all that is good this week. And though hundreds of my colleagues pulled long hours and college-worthy all-nighters to create, support and capture the events commending Father Ted to God and honoring his life, no one complained of the strain. We celebrated goodness itself as manifest in one great man whose true legacy should be the inspiration of greater goodness in all of us.

In the end, the measure of that man stretched from the front doors of the Basilica of the Sacred Heart, past the lake and the Grotto he loved so well, and up Saint Mary’s Road to the gates of Holy Cross Cemetery.

It was a procession of a kind Hesburgh made untold dozens of times in his nearly 72 years as a Holy Cross priest, having said farewell first to men of God much older than himself, then to the mentors and guides who had nurtured his vocation and sent him forth, and finally to the sons of Moreau and Sorin with whom he’d labored long years in the vineyard of the Lord.

Lining the way yesterday were two unbroken chains of solemn, shivering young men in jackets and ties and young women dressed more sensibly for the brutal winter wind. They stood shoulder to shoulder with cooks and groundskeepers and campus police, with librarians and professors, firefighters and administrators, with web specialists and well-wishers from off campus. Some of those had driven as long as 14 hours just to pay their respects and say goodbye to this priest who had touched their lives — less perhaps through his grand accomplishments than by what Father John Jenkins, CSC, in his funeral homily had called “thousands of unheralded acts of kindness.”

“I can’t think of a more fitting tribute than to see you gather in the cold to line the path to his final resting place,” President Jenkins told the Purcell crowd, which included thousands of students. “I don’t think Notre Dame ever shone any brighter than it did today,” added former football coach Lou Holtz, whom Hesburgh hired as one of his last acts as University president. “That’s what Notre Dame is all about.”

The formal observances of Father Ted’s passing began Tuesday. I arrived for the visitation as soon as the Basilica doors opened at noon. People — professors and staff mostly — were already lining up to say goodbye and pray. Twelve thousand more would follow over the next 21 hours. As I walked back to our offices in Grace Hall, classes were letting out, students hurrying back across the chilly campus landscape to their dorms and dining halls. For the most part, I thought, Notre Dame is carrying on as usual.

I’ve heard people question whether today’s undergraduates know and appreciate Father Ted. I have to admit that I wondered the same thing myself. But then I had the privilege of attending the funeral, walking in the procession, sitting in the press box at Purcell and watching thousands of them take their seats. Father Ted’s future in earthly good works seems secure.

If the student turnout yesterday doesn’t convince those who missed the live online coverage of these events, just watch the six-minute video that senior Nicole Sganga made capturing the gratitude of 200 of her peers.

But last night they burst with applause when emcee Ann Thompson ’79 of NBC News said that one of Father Ted’s greatest achievements was making Notre Dame coeducational. They cheered again when they heard trustee Martin Rodgers ’88 tell two stories. In the first, Father Hesburgh intervened on his father’s behalf in 1951 against a racist roommate. Then, in the 1980s, when the younger Rodgers’ op-ed on diversity at Notre Dame appeared under an unfortunate headline critical of Father Ted, the aging president called him in to talk. He told the startled freshman there was a new job waiting for him in the admissions office if he thought he could raise the numbers of underrepresented minorities in the student body. Rodgers took him up on the offer and the needle began to move.

The students heard other stories, too. They heard the voice of a former president of Princeton break a little in recounting how Father Ted rescued his elderly mother from a lonely death and made arrangements for her care. They heard Senator Joe Donnelly ’77, ’81J.D. appreciate Father Ted for giving kids like him from families of modest means a chance at a Notre Dame education. They heard President Carter tell a hilarious story of Father Ted’s collecting on a favor. They heard former First Lady Rosalynn Carter, with whom Hesburgh had worked to relieve refugees from the Cambodian genocide, call him “the greatest humanitarian I have ever known.”

Afterward, hundreds of them gathered in front of the Hesburgh Library to smoke cigars in his honor. So, yeah. They know Father Ted.

Perhaps a few of them contemplated one other thing they might have heard before stepping out into the night air. This one came from Father Paul Doyle, CSC, one of Hesburgh’s closest friends and his “eyes” in the last years of Hesburgh’s life as he “surrendered his eyesight to macular degeneration.”

It wasn’t a story. Just an insight.

He said, “Father Ted never stopped learning and growing in his 97 and three-quarter years with us. He anticipated an afterlife that is the fullness of life. The Father Ted we know had a rich interior life. Now that he has gone to be with others whom he loved, and with our God, his life will be expanding and deepening forever.

“He looked forward to that.”