One advantage of the Murdy Family Organ’s impressive size is the breadth of the repertoire musicians may now perform authentically inside the Basilica of the Sacred Heart. Father Peter Rocca, CSC, the basilica’s rector, says the carefully chosen variety of its pipes will enable organists to play hymns, Mass parts, preludes, postludes and concert pieces in ways that better reflect how they were performed by composers from different periods and musical cultures.

Such versatility presented thorny design challenges, such as how to seamlessly blend the different textures of sound coming from pipes of all sizes, shapes and materials (both metal and wood) that may actually sit quite far apart. The arrangement of the bouquet, so to speak, matters a great deal.

Organ builder Paul Fritts organized the Murdy’s 69 stops of pipes in five divisions. (A 70th stop controls something else entirely, and if you want to know what that is, read on.) The five divisions correspond with the instrument’s four manuals — or keyboards — and the pedals organists play with their feet.

As you might guess, the pedals control pipes in the Pedal division, but at first glance the names of the manual divisions — Great, Swell, Rückpositive and Trompeteria — don’t tell us much about what they are or do. 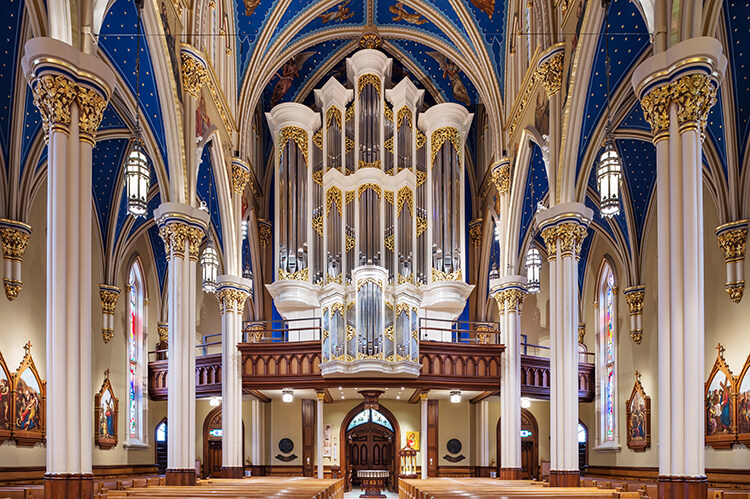 It may help to explain first where those divisions are located. Imagine yourself standing in the basilica’s center aisle, looking up at the organ. The part closest to you and separate from the rest of the organ case is the Rückpositive. Levitate upward, keeping your eyes forward, and the next section is the Great, topped by the Swell, with the relatively small division of the Trompeteria, or Spanish trumpets, nestled inside the case somewhere in between them. The towers on either side of this central section house the two halves of the Pedal.

Couplers between these divisions let an organist play many different combinations of them in unison — to press a key on the Great manual, for instance, that plays the same note from the Swell or Trompeteria simultaneously.

All well and good. But what role does each division play in the organ’s music?

Great: The backbone of the organ’s sound, Great pipes play from the lowest of the Murdy’s four keyboards. They occupy the central part of the organ above the organist’s head. If the organist is sitting on the ground floor of the organ “building,” the Great division occupies floors two and three, and its pipes include some of the largest in the organ’s façade. Most hymn accompaniments and secular organ compositions find their core in an organ’s Great division.

Rückpositive: Positioned within the loft railing, behind the organist — German rück means “back” — the Murdy’s Rückpositive is played from the second keyboard. Its smaller pipes add color and a clarity of sound that is more present to the congregation than the music coming from higher divisions. They often echo musical phrases introduced in the Great, but may also lead on their own.

Swell: Above the Great on the organ’s top floor, corresponding to the third keyboard, is the Swell division. Swell pipes are enclosed in a bedroom-sized box made with vertically shuttered sides that may open wide or close up airtight as the organist presses or releases an expression pedal. The resultant “swelling” or “shrinking” of sound — a crescendo or decrescendo — enables the organist to control the feeling of a musical phrase, an effect especially useful when playing Romantic compositions from the 19th century.

Trompeteria: Fritts drew inspiration for the Murdy’s two stops of horizontal Spanish trumpets — a kind of reed pipe — from a unique instrument made by organ builder Jordi Bosch in 1776 that Fritts and Bruce Shull heard on the island of Majorca. They are played from the uppermost of the Murdy’s four manuals.

Pedal: The Murdy’s pedal pipes are arranged in the two towers that rise to the left and right of the central case. Notes alternate between the towers, starting with C on one side and C-sharp on the other, to ensure balances of weight, wind flow, sound and appearance. The diameters of the pedal pipes are, broadly speaking, bigger than tonally similar pipes in the rest of the organ.

A note on culture: One of this organ’s many distinctive qualities is Fritts’ choice to include both German- and French-inspired reed pipes. For centuries, organ builders in France and Germany have made their pipes differently, creating distinctive sounds that became important ingredients characterizing the flavors of organ music in the two cultures. German reeds typically generate a darker, rounder, mellower sound; the brighter and crisper French reeds sing with brashness and flare, Shull says — and more snarl in the bass. Historically, organs do not offer both, but Fritts wanted the Murdy to support both national organ repertoires, from Bach to Saint-Saëns, while offering new creative possibilities for performance and composition.

Finally, for 18 months the magazine has reported that the Murdy has 70 stops, following information on the Fritts & Company website. Now we’re saying 69. Why the confusion?

Simple: The 70th stop isn’t a set of pipes at all, but a kind of organ “toy,” a rotating wheel of chimes called a zimbelstern that creates a sparkling, shimmery sound which “floats” atop the pipes’ music.

Come for Christmas. There’s a good chance you’ll hear it.