Raised in a lower-middle-class suburb just east of Los Angeles by Mexican immigrant parents who kept four children off the streets in large part through sports, Aileen Villarreal ’10 at a young age became an avid fan of Fighting Irish football and major league baseball. 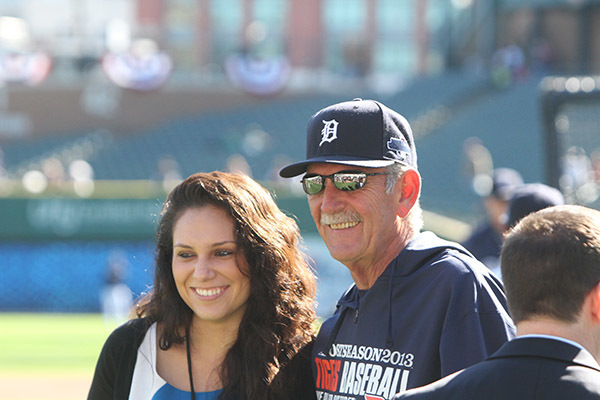 “My love of sports comes from my dad, he is a huge baseball fan,” says Villarreal. “He would take our family to Dodger Stadium once a year, and it was such a thrill. I grew to love college football through my brother. We would spend Saturdays watching all the games on television.”

She dreamed of attending Notre Dame and working one day for a big league ball club.

Big dreams can come true. Six months after graduating from Notre Dame, where she had served as a football student manager, the 22-year-old left her stint as an unpaid marketing development intern for the Houston Astros to begin a successful six-year career in media relations with the Detroit Tigers.

At just 24, Villarreal was promoted and became the first Hispanic female media relations director in Major League Baseball. “Besides being bilingual with excellent people skills and an obvious passion for baseball, what really stood out for me was her education and experience at Notre Dame as a football student manager,” says Ron Colangelo, the vice president of communications who hired Villarreal as a media relations coordinator. “That is very much like a professional sport experience.”

Not only that, but, as she says, “For the rest of my life I can say that I was once in charge of painting the [ND] helmets.”

Along with her work for the Fighting Irish, Villarreal honed her time management skills as she studied to earn degrees in both sociology and film, television and theatre. That efficiency came in handy for her Tigers’ job.

Often working 15-hour days over an eight-month stretch, including accompanying the team on all road trips, Villarreal was in charge of coordinating the interaction between the media and team, assisting Latino players with media interviews, producing the exhaustive annual media guide, working at winter meetings, and managing two staff persons and a seasonal intern. She also oversaw Spanish Twitter and Instagram accounts.

It was not, to use baseball lingo, a can of corn. “Outside of the sometimes very challenging day-to-day assignments, I had to be available 24/7 because anything can happen at all hours, such as a trade or when a player gets in trouble and you are dealing with crisis communications,” she says. “In the age of social media, I was constantly monitoring what the players were writing, tweeting and what the media was reporting.”

For a 7 p.m. game, Villarreal would arrive at the ballpark by 9 a.m. and prepare extensive game notes for the media. When the clubhouse opened at 3:30 to reporters, she would oversee the pregame manager interview session and player interviews, then attend batting practice before heading to the press box with her staff to provide information during the game. She would return to the locker room for postgame interviews before driving home around 11:30 p.m.

Despite its demands, Villarreal says working media relations with a big-league team had some wonderful benefits.

“Long road trips can be exhausting, but my favorite part of the position was traveling to different cities where I could sightsee, meet up with old friends and shop,” she says. “And although it was especially stressful dealing with increased media requests, being on the big stage and working the World Series and playoffs was electrifying. It was also a pleasure being introduced to some celebrities such as Richard Branson, Jeff Daniels, J.K. Simmons and George Lopez. I’ll never forget talking in Spanish with Jose Feliciano, who is a big Tiger fan, just before he sang ‘The Star-Spangled Banner.’”

Still, Villarreal had her own challenges when she joined the Tigers. “I had everything going against me. I’m a young female and a minority working in a male-dominated sport.”

Especially in her first year, Villarreal felt she was unfairly discounted by some media members. “It seemed that I had to prove myself even more than a man in the same job,” she says. Over the years, she also was disheartened because she had to contend with inappropriate, sexist remarks.

Despite the aggravations Villarreal faced, says Tigers manager Brad Ausmus, “Aileen very successfully dealt with a lot of personalities, which can sometimes change quickly if you are on a losing streak. She understood that the team and media have jobs to do, and she made them work together but not at the detriment of each individual’s job.”

These days, however, Villarreal is facing a different set of challenges, as are the Detroit Tigers. The organization suffered its first big loss before the 2017 season even started because Villarreal left her Tigers’ post at the end of March.

“I really missed my family, and they are the most important thing for me,” says Villarreal, who has moved back to her childhood home. “I am very close to my parents, older brother and two younger sisters, and since they all live in L.A. it is wonderful to be with them again while being in a better position to help out the family however I can.”

Despite that, she has mixed feelings about leaving the Tigers. “It was mostly a wonderful and rewarding experience both professionally and personally. I gained so many transferable skills and I fulfilled one of my dreams, but I was working 24/7 from February to October. I am very excited about fulfilling my other big dream of working in the film or television industry.”

Villarreal now is networking and exploring options in production, representation and media relations for the entertainment industry. “I am not going to jump into just anything, because I will be selective in securing a position that best fits my experience and has a better work-life balance,” she says.

As Villarreal looks to the future, Detroit players are mourning her move.

“Aileen had a very hard job to do, and she was the best,” said first baseman Miguel Cabrera, who had difficulty talking about losing his friend. “Because she spoke Spanish it greatly helped the Latin players and our families. But most of all, she is just a great person.”

When he learned that Villarreal was moving on, right fielder J.D. Martinez said he wanted to cry. “Aileen is my very favorite person and has been like a sister to me,” he said. “She was very helpful to all the players and would do anything for you. I asked her sometimes to tape my swing in the batting cage with her smart phone, and she was happy to do it.”

Villarreal says she misses the camaraderie with the players but will stay in touch with some of them through texting and social media, and visit when the team plays in Southern California. “A few of the ones who are closer to my age,” she says, “became like brothers to me.”

Bill Dow, who lives in Birmingham, Michigan, is a senior development officer for Beaumont Health and has been a regular contributor to the Detroit Free Press sports page. His son, Cameron Dow, graduated from Notre Dame in 2013.