Visiting Pittsburgh’s St. Paul Cathedral on our first date, Nancy and I prayed before a statue of St. Joan of Arc. It’s a moving image, a kneeling girl with her face upraised to heaven, she appears poised in surrender to God. The saint became a special patron in our marriage and family, and we named our first daughter after the warrior maid. 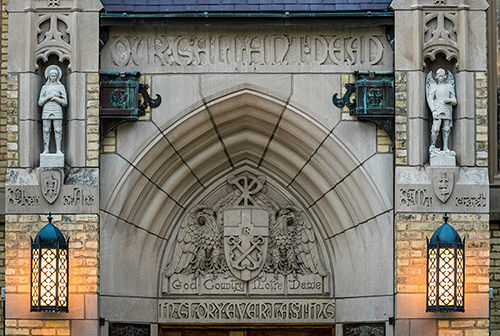 St. Joan also has a prominent representation at Notre Dame: Up to the left of the Memorial Door that opens on the east transept of the Basilica of the Sacred Heart. Across from her is St. Michael the Archangel, the patron saint of soldiers and the heavenly scourge of demons. St. Michael’s presence is understandable given what the door signifies: An enduring memorial honoring the 56 Notre Dame students who gave their lives fighting in World War I, and, by extension, all who have done likewise in overseas conflicts ever since.

Yet what of St. Joan? How is it that a teenage girl, a country miss, was chosen to flank St. Michael above this prominent martial landmark?

Rev. Peter Rocca, CSC, the Basilica’s rector, has indicated that Joan’s presence above the Memorial Door is due to her role as patroness of France — the country where the memorialized students lost their lives. That makes sense, but it seems that the inclusion of her image in this shrine has additional meaning worth pondering today.

Joan was an illiterate farmer’s daughter, yet circumstances and divine providence led her to serve as a French field commander during the Hundred Years’ War against England. Although brilliant in battle, St. Joan had no illusions about warfare’s downsides — a realism she shared with all experienced combatants. Here’s how President Dwight D. Eisenhower, the five-star general and World War II veteran, put it: “I hate war as only a soldier who has lived it can, only as one who has seen its brutality, its futility, its stupidity.” Practiced fighters know that war spells death and destruction, loss and grueling hardship. They are never anxious for the fight, and they’re always glad when it’s over. They pray for peace and for perseverance.

And yet soldiers are prepared to fight when called upon. Their code and their honor, their communal identity, forbids them from shrinking from battle. This is what Joan’s life and testimony reveal — a testimony recorded during her trial after she was captured by opposing forces loyal to England in 1431. “Far rather would I sit and sew beside my poor mother, for this thing is not of my condition,” she said. “But I must go, and I must do this, because my Lord will have it so.”

Although condemned by her enemies and burned at the stake, Joan was eventually vindicated, rehabilitated and canonized by Pope Benedict XV — the “Peace Pope” who had railed against the Great War — in 1920. Her passionate love of God and devotion to her beloved homeland are what led her to take up arms against an invading enemy, yet she did so with great reluctance. Thus, it’s somehow fitting – providential even – that her feast is observed on May 30, a day that frequently coincides with our Memorial Day observances.

Like professional warriors, St. Joan had no delusions about battle as an enticing adventure. Rather it was something that ought to be avoided at all costs – an absolute last resort brought on by an intolerable and otherwise intractable situation. This is consistent with the Church’s longstanding “just war” doctrine which enumerates specific criteria to determine when and under what circumstances Catholics may engage in warfare — when, for example, an international aggressor intends harm that is “lasting, grave, and certain,” in the words of the Catechism, and every other recourse to peaceful resolution has proven “impractical or ineffective.” Those criteria are not like elements of a checklist that national and military leaders simply tick off one by one before they’re free to enter the fray. Instead, just war doctrine is meant to inhibit our rush to war, and to ensure that combat, once engaged, is conducted within morally proscribed limits.

Of course, those kinds of deliberations are beyond the ken and competence of ordinary soldiers — the conscripts and volunteers on the front lines who follow orders while striving to persevere to the end. Among these, it’s the men and women whose service was cut short whom we honor today: The men and women who served nobly and conscientiously, and who made the ultimate sacrifice. “The real purpose of a memorial, from the Catholic point of view, is to inspire a prayer for those we desire to remember,” said Notre Dame President Rev. Matthew Walsh at the Door’s dedication in 1924. “Let us ask God that this memorial will not only be beauty in stone, but also a reminder to pray for the men to whom it is dedicated.”

Rick Becker is a writer and registered nurse who teaches nursing at Bethel College in Mishawaka, Indiana. His blog is God-Haunted Lunatic.