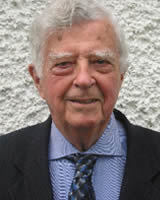 The passing of Father Ernan McMullin in Ireland was a sad end to a 55-year friendship for my family and me. In 1956 my mom and dad, Brigid and John Griffin, my brother Ger and myself emigrated from Limerick Ireland to South Bend, Indiana. My 3 sisters — Mary, Gerry and Helen — had come over prior to our arrival. Upon settling in South Bend, an old friend of my mom’s, Sister Gerald at Saint Mary’s College, welcomed us and told us about a priest we needed to meet.

That priest was Ernan McMullin.

That meeting made for a great friendship — one of many he had during his long life. Ernan or Father Mc as I called him was one of the most brilliant people I have ever met — and yet so down to earth . . . an Everyman.

He officiated at the marriage of one of my sisters, he baptized and married grandkids and great-grandkids and officiated at my dad’s and mom’s funerals. He attended many dinners and sing-alongs at the Griffins’ house while remaining a brilliant philosopher, author and lecturer. He was known to treat all equally regardless of education, age, political or religious beliefs.

While I was studying marketing at Notre Dame, I became involved in the theater both at ND and Saint Mary’s College. He was a guiding force for me during those four years and a constructive critic and mentor. This mentoring continued throughout my career as an actor. He was an avid play reader and audience member. He would recommend many plays for me to see and, at other times, roles I should pursue.

The amazing thing about him was that as brilliant as he was, he was also a humble and compassionate man and an incredible listener. He would talk and listen to the world’s great philosophers and to the lowliest of students with the same passion and interest. He was a listener — no matter how young or old you were. He loved children, he loved life, he loved my folks and family — with all our flaws and imperfections and he never judged any of us.

I will miss catching up with him on the recent plays he has seen or read and how he liked or disliked them and why. I will miss the man who always took part in a good old Irish sing-along in our home, who played and conversed with us kids, grandkids and great-grandkids at many a family gathering — a man who enjoyed children as much as adults. I will miss the man who always had time for me as a student and as an adult — no matter how busy his life was.

I want to thank his family for sharing him with us — lo, these many years, and extend my condolences for their loss. We were all lucky to have him in our lives. He will be missed by all those whose lives he touched.

“Good-night, Sweet Prince; and flights of angels sing thee to thy rest."

Sean Griffin lives in Seattle, Washington. A professional actor, he has worked all over the United States, including 20 years in New York in theater, television and movies. His wife, Bernadine Griffin, is the managing director of the 5th Ave. Theatre in Seattle. Email him at seanandbernie@msn.com.