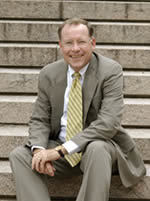 David Walker ’81 reviews hundreds of appeals from charities each year as vice president for marketing of the National Association of Manufacturers in Washington, D.C. But when a letter from a new charity crossed his desk two years ago, it stirred him like a wake-up call. “We saw its value not as charity so much as duty,” he says.

The appeal was from the Coalition to Salute America’s Heroes, which had been organized in response to the 9/11 terrorist attacks and the military operations in Afghanistan and Iraq. Politically neutral, the coalition provides financial aid and other assistance to U.S. military veterans who have been injured physically or emotionally while fighting in those two nations.

Coalition subsidies help severely injured veterans obtain housing that is specially designed for paraplegics or quadriplegics. The tax-exempt organization also provides a variety of counseling and rehabilitation programs for military personnel who have trouble readjusting to civilian life because of injuries or for other reasons. Some dependents of these veterans also can receive counseling.

“It’s amazing how the government falls down on the job with these vets,” Walker says. “Modern medicine and battlefield technologies allow badly injured soldiers to survive attacks, but they come home, and then what? In many cases, spouses must quit jobs in order to care for them. Lives are turned upside down. The American Dream they once cherished flames out.”

The association of manufacturers—which has 13,000 members—signed on as a sponsor of the coalition. Walker is the liaison between the two organizations.

“I’m ashamed to admit that it took a work assignment to get me to focus on what the sacrifices of war really are,” he says. Once focused, however, he has been a loyal worker on behalf of the men and women who have made the sacrifices. He spends up to 10 hours weekly on publicity and promotions, helping the coalition gain momentum.

“I don’t think anyone in corporate America is personally more committed,” says Roger Chapin, founder and volunteer president of the coalition. He gave Walker much of the credit for “the tremendous boost we’ve gotten from industry rallying behind us.” Chapin, a wealthy San Diego developer and businessman, has started numerous charities to help veterans, the elderly and disadvantaged youth.

Walker was in Orlando, Florida, last December for the coalition’s first Salute America’s Heroes Road to Recovery Conference and Tribute, and he came away even more committed to the effort. “Seeing some of the soldiers who are involved leaves everyone in awe, not because of their wounds or lost limbs but because of their heart and spirit,” he says. “What’s more is the power of the cross working in their lives. Their faith is strong and unwavering despite the challenges that have been thrust on them.”

Four service members from among the 300 veterans who attended the conference learned that they were receiving coalition subsidies of up to $200,000 each toward the purchase of handicapped-accessible homes. One of them was Army Reserve Staff Sergeant Tracy Jones, who became a quadriplegic when the truck he was driving was hit by an Iraqi water tanker.

Money for the homes and the coalition’s other programs has come largely from corporate donors. But this spring a fund-raising project was getting off the ground that Chapin believes will make the charity less dependent upon monetary donations. With the help of Walker and industry, the coalition is collecting used toner cartridges from office printers. The cartridges will be refilled and resold, creating cash flow for the coalition.

Walker says as the coalition becomes better known, the service members who are referred for assistance—mostly by military hospitals—are growing in number and complexity of problems. The challenge of offering them help comes simultaneously with what he calls “a creeping indifference” to the fighting in Iraq. His goal is to “make sure the harsh realities of the war do not become far removed from our daily lives.”

He has been inspired, he says, by the unselfishness of the service people “who put so much on the line for the sake of the rest of us.” When asked by coalition clients why he is so committed, Walker responds with a line that Demi Moore’s character delivers in the movie A Few Good Men. She defends Marines, she says, “Because they stand on a wall and say, ‘Nothing is going to hurt you tonight. Not on my watch.’”

A service member who has made public appearances to promote the coalition is former Notre Dame basketball star Danielle Green ’99, who lost her left hand and part of her arm while serving in Baghdad. “She is a delight and inspiration,” Walker says.

His assistance to the coalition “fits in with the ‘God, Country, Notre Dame’ initiative of the Alumni Association,” he says. “I am reminded also of when, as a government major, I did volunteer work at a juvenile detention center in South Bend.” Community and public service, he says, “were imprinted on my mind at Notre Dame.”

Jim Raper is a freelance writer based in Norfolk, Virginia.