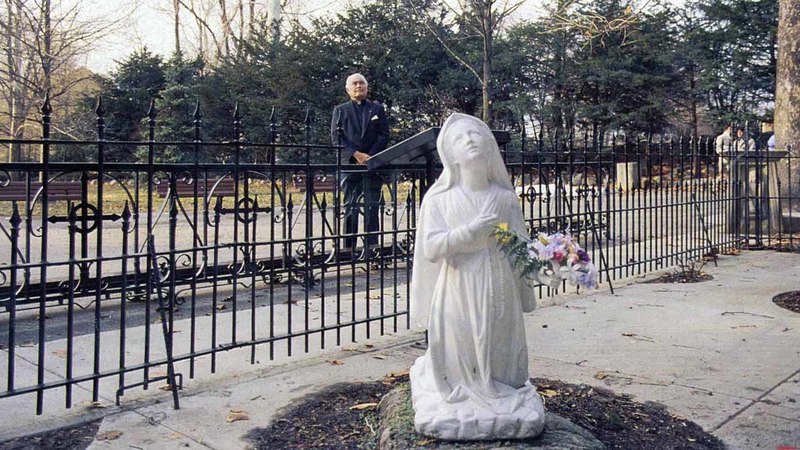 Editor’s Note: This essay by Robert Schmuhl, Notre Dame’s Walter H. Annenberg-Edmund P. Joyce Professor of American Studies and Journalism, was written for the spring edition of Notre Dame Magazine. We are posting it here after the passing of Rev. Theodore M. Hesburgh, CSC, Notre Dame’s president from 1952-1987, on February 26 at age 97. Other stories related to Father Hesburgh and the magazine will be offered here over the next several days. A special print edition of Notre Dame Magazine devoted to the life, leadership and achievements of Father Hesburgh will be mailed to our readers in early spring.

Whenever it was possible, Father Theodore Hesburgh, CSC, liked to make a short stop on Holy Cross Drive near Saint Mary’s Lake if he was traveling around the Notre Dame campus.

“Would you mind pulling over to the side here?” he usually inquired — and nobody ever minded. Even with diminished eyesight caused by macular degeneration, he knew right where he was from the curves in the road and the familiar surroundings.

Not too far off to the side there is the Grotto of Our Lady of Lourdes, where he prayed since he first arrived at Notre Dame as a student in 1934, more than 80 years ago.

The ritual of the brief sojourn rarely varied. There was the saying of a “Hail Mary” or two and the occasional special blessing for the driver and other passengers in the car.

A couple years ago, though, the routine took an amusing turn for the University’s longest-serving president, whose term spanned the 35 years from 1952 to ’87. With prayers offered and amens pronounced, Father Hesburgh looked at the Grotto’s glow cast against the night’s darkness and quipped in deadpan fashion, “I should have asked for the candle concession.”

“You could have retired to some exotic island by now,” he was informed in a jesting reply.

Never to be outdone, the priest — no stranger to conversing with presidents and popes as well as people of all ranks and religions — retorted matter-of-factly, “I’d own the island by now.”

While the Main Building (crowned with its 19-foot statue of Mary) and the Hesburgh Library (featuring the multistory mosaic of Jesus with raised arms) are imposing to anyone seeing them for the first — or for the hundredth — time, the Grotto is unique. Lacking the formality of the Basilica of the Sacred Heart, nestled among trees in the back of campus, the setting and its statue are public and intimate at the same time.

This shrine was originally proposed by Notre Dame’s founder, Rev. Edward Sorin, CSC, and built in 1896, three years after his death. Since then, the Grotto and what it signifies have possessed something akin to a magnetic attraction for students, alumni and others.

Perhaps it’s a quick prayer for a family member, or the lighting of a candle for a problem that just doesn’t seem to resolve itself, or even a rosary for someone recently departed. The Grotto for many people, including Father Hesburgh (fittingly called the University’s second founder), was — and will always be — a singular place.

For someone like me, who’s crossed the Rubicon of senior citizenship (that milestone year of 65) and confronted intimations of mortality recuperating from two cardiac repair jobs (complete both times with incarceration in intensive care units), priorities shift and somersault. It’s as though there’s a new angle of vision on day-to-day activities, a prism providing new perspective.

Today it’s become second nature for me to detour by the shrine while walking on campus near the Main Building or to slow my car to a crawl while driving near the Grotto.

Out of doors ( en plein air, as the French say), this Notre Dame landmark quietly emphasizes the Marian devotion and mystique that have animated the University since 1842. It’s that and really more.

Any jocular aspirations of acquiring the candle concession were — and should have been — the province of another and much more worthy claimant. The rest of us will be content to make time to stop at the Grotto, if only for a few minutes, either by serendipity or chance — or for a definite reason.

There, for well over a century while the University has developed so dramatically, men and women have come with earthly intentions in need of celestial attention. There, too, these men and women have found reassuring solace in the abiding and beckoning light, as Father Hesburgh always did.

Bob Schmuhl is the Walter H. Annenberg-Edmund P. Joyce Professor of American Studies and Journalism at Notre Dame, where he has taught since 1980.