The sendoff was uneventful, with no announcement or fanfare. The music would speak for itself.

On its last day in Notre Dame’s Basilica of the Sacred Heart, the Holtkamp organ played as well as it ever had since its dedication in April 1978 — beautifully, at the fingertips of an expert and friend. 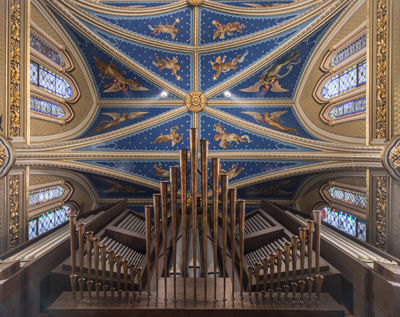 With the students home for the Christmas holiday, the congregation for the 10 a.m. Mass celebrating the Feast of the Holy Family on December 27 was small, mostly professors and staff and their kin. They greeted the celebrant, Father Neil Wack, CSC, ’02M.Div., with “Hark, the Herald Angels Sing,” and continued with seasonal hymns and Mass parts led only by a cantor – no choir – and chosen to suit the occasion.

The moment wasn’t about the instrument. It was about the community and its prayer, just as it had always been. The old organ, despite its imperfections, proved itself one last time a good and faithful servant.

Its 2,929 pipes would live on to serve another community on another day. Voiced to a brand new church being built for St. Pius X parish in Granger, Indiana, these pipes will speak again, though they will sound different.

The three-keyboard console, unusual for the natural-wood finish on all of its keys, will find a new home in the Basilica’s small museum.

For the Holtkamp’s case and internal works, however, this was the end. The closure of so many old churches in recent years has glutted the market with those parts that might otherwise be salvageable, said Karen Schneider-Kirner, a choir director and Basilica organist who has accompanied the Notre Dame Folk Choir for 18 years.

As the Mass continued on this third day of Christmas, the faithful sang “It Came upon a Midnight Clear” and “Joy to the World,” the closing hymn. When the Basilica’s great south doors opened to a chilly and leaden Sunday morning, worshippers chatted in the aisles while pulling on coats, then filed outside to “Suisse Noël,” an 18th Century postlude composed by the French virtuoso and organist of Notre-Dame de Paris, Louis-Claude Daquin. Many were unaware that they were hearing a unique instrument in its full glory for the last time.

“It shows the different colors of the organ and uses all three manuals” of the console, Schneider-Kirner later said of the postlude, explaining to visitors who had climbed up to the choir loft after communion to watch her play. “And since the Basilica was built by French priests, we thought it was appropriate.”

The last official chord played on Notre Dame’s Holtkamp was the A-minor of Daquin’s composition. But Schneider-Kirner wasn’t finished. The aisles below still bustling, she played a verse of “Silent Night,” her fingers moving gracefully over wooden keys worn smooth and thin over 37 years, her eyes welling toward the final phrases. The last of the massgoers, joined by a group arriving for an infant’s baptism, stopped what they were doing and sang along.

The story is often told of the German carol that Franz Xaver Gruber, a church organist, composed its music for two solo voices, chorus and guitar because the organ of St. Nicholas parish in the Austrian Alpine village of Oberndorf was unsuitable for use on Christmas Eve 1818.

That description doesn’t fit the Holtkamp, a good instrument that is making way in 2016 for an artisanal masterpiece of over 5,000 pipes designed and built for the Basilica by Paul Fritts & Company Organ Builders. Work to remove the old organ and strengthen the choir loft to support the new instrument would begin the next day. But in those last minutes before the church’s doors locked on Sunday afternoon, the words of that beloved Christmas lullaby seemed the most fitting way to say goodbye: “Sleep in heavenly peace.”