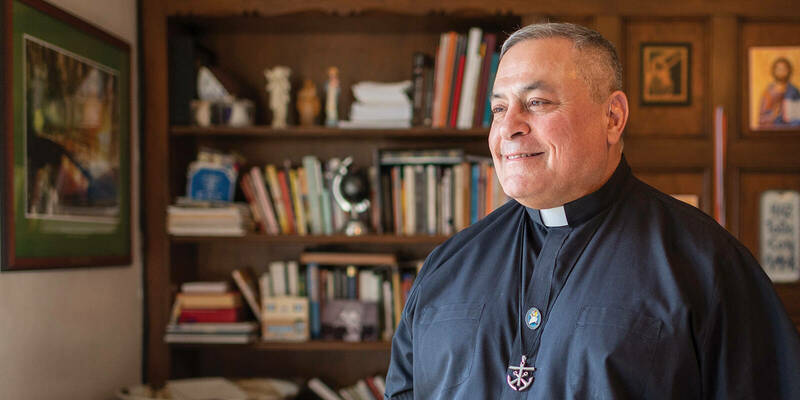 I showed up at Sister Norma Pimentel’s Humanitarian Respite Center on Christmas Eve when the people were having lunch. I looked for a table with an empty seat, and sat next to two women and three kids.

After introducing myself, “Hola, soy José,” I asked the usual questions. How are you doing? When did you arrive here? How was the journey? I am always touched by people’s deep faith when I ask, “How did you get here?” The response is almost always, “By the mercy of God.”

Having worked at the center four times, I have heard lots of stories. There are lots of similarities, but each story is unique in the details. Today’s story was one of the most astonishing that I have heard.

The five people were a grandmother, Juanita, a young mom, Mariela, and the mom’s three children — Isabel, age 11, Carolina, 6, and Jorge, 4 months. (Their names have been changed to protect their privacy.) I was shocked to learn that they had been traveling for six months, having left their home in Venezuela on June 23. They traveled through seven countries to get to Sister Norma’s Humanitarian Respite Center. I could not imagine a journey like that.

Mariela described a four-day climb up mountains to cross from Colombia into Panama as the most difficult physical ordeal. As she described it, she was tearing up. So was I. Then I realized, “Wait. If she left six months ago, and her son Jorge is 4 months old, that means that she made the trip up the mountain at about seven months pregnant.

Juanita and Mariela told me that there were hundreds of people from many different countries making the trip up that mountain. I could not have done it. I can’t even imagine their willpower — and not just willpower, but the love for their children and grandchildren that would keep them going on such a trip.

That was not the worst part of the trip, by far. As they entered Mexico, the family was kidnapped and locked up in a house for a month. While there, Juanita went into labor. The kidnappers brought her to a hospital where she gave birth to Jorge. She went back to that house. The conditions were deplorable. They told me that, until that part of the trip, they never went without food. People gave them food all along the way. But the kidnappers, members of one of Mexico’s cartels, would not give them food. Neighbors in nearby houses would bring them food.

The kidnappers wanted the baby. They would kill him and sell his organs. I have heard of these kinds of crimes, but I have never spoken with anyone who has lived through this. Mariela sobbed as she told me the story. I was in shock. Between her and her mom, one of them was always awake holding little Jorge close to them, for fear that the kidnappers would take the baby. This went on for several weeks until one day several of the neighbors arranged for the family to escape. They brought them to a bus, paid their fare, and the family was on their way. I cannot imagine what this family has been through.

When they arrived at the border city of Reynosa, they stayed in a shelter for one month. Then they crossed over and were immediately taken by ICE to Sister Norma’s Humanitarian Respite Center.

I learned the family that would “take them in” in Houston could not do so for eight days. Juanita and Mariela and the three children would have to stay at the center until then. Even though their needs were provided for, I gave the mom $100. They had nothing. I knew that they would need it for the trip in eight days.

There are so many thoughts and images running around my head. The entire time we talked, little Jorge was sound asleep in his mother’s arms. He has absolutely no idea how much his mother has done for him already, how much she has risked for him, how much she loves him, how much more she will do for him.

As Mariela and Juanita told me the story, I kept thinking of Herod who tried to kill Jesus. Little Jorge is a modern-day Jesus. And those kidnappers are modern-day Herods.

As I sat at that table and looked at Juanita, Mariela, Isabel, Carolina, and Jorge, all I could think of was that they were today’s Holy Family. Forced to flee Venezuela because of so much violence, they had traveled to an unknown place where they did not speak the language and had nowhere to go. Joseph and Mary and Jesus had to do the same thing.

Mexico, which is my most favorite place in all the world, has become a country out of control. The cartels call the shots. This makes me so sad. A country that I dearly love is being lost to cartels. I don’t use the word “evil” often, but these cartels are evil, pure evil.

Another very interesting thing happened while I was working at the Center over Christmas. I got into a conversation with one of the workers. She was taking big packages of baby wipes and putting them into baggies of eight. So I asked if she wanted help. We worked together and visited.

I learned that she was a child of migrants. From her earliest years she remembers moving from place to place to be with her parents to help pick the crops. Eventually they settled in Weslaco, Texas, and she was the first in her family to go to college.

She said, “I heard you tell one of the other workers yesterday that you live and work at Notre Dame.” She went on to tell me that her family went every year to Niles, Michigan, where they picked raspberries, strawberries, rhubarb, apples and more. She told me that the highlight of each week was crossing the Michigan- Indiana border and going to a Kmart every Sunday. It was a big deal for the family.

On Christmas Day, after celebrating the 9 a.m. Mass in the Basilica, I could hardly wait to go to the Respite Center to see Jorge. To my surprise, the family was not there.

I checked everywhere and could not find them. There were only about 80 people. I would have to see them somewhere. After checking every corner of the place, I learned from the workers at the front desk that they left on Christmas morning. It turns out that the $100 I gave them was enough for bus tickets to Houston. It was a lack of funds that was holding them back.

And though I was dying to see Jorge, I was so happy that they would be welcomed in to a home on Christmas Day. They would get a shower and have nice meal and sleep in beds. I thank God that I followed his inspiration to give them some money. I could have said, “Well, they will be here for a week. So, I will give them the money later on.” But God inspired me and for once I acted on the prompting of the Holy Spirit. It made me think of all the times that I don’t act on the prompting of the Holy Spirit.

What a Christmas Eve and Christmas Day. I will remember the Holy Family of Juanita and Mariela, Isabel and Carolina and Jorge, for a long, long time.

Lord Jesus Christ, Son of the Living God, have mercy on me a sinner.

Father Joe Corpora works in Campus Ministry and the Alliance for Catholic Education. He is priest-in-residence at Dillon Hall and is one of 700 priests whom Pope Francis appointed in 2016 to serve as Missionaries of Mercy. His most recent book about this latter experience is Doing Mercy: A Path to Contemplation.