“Connemara,” Oscar Wilde said, “is a savage beauty.” A wild mountainous protrusion into the Atlantic along the west coast of Ireland, where sheep huddle behind stone walls to escape blowing rain even in summer, the landscape still fits his description.

About 15 curvy kilometers southwest from the crossroads village of Leenane, the rough country becomes suddenly manicured. A picture of 19th century sophistication — or the set of a PBS melodrama — emerges through the mist. Its stately reflection ripples in the lake that laps at the edge of the property, adding to the impression that this gray stone castle is only a mirage.

The stream of cars and tour buses turning into the grounds confirms what the road signs have promised: it’s Kylemore Abbey, among the most magnetic attractions in this part of Ireland. 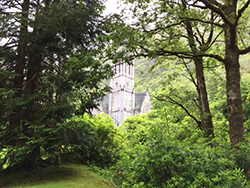 In Kylemore’s serene nook at the foot of Duchruach Mountain, savage beauty yields to groomed splendor. Home since 1920 to a community of Benedictine nuns who have preserved its tranquil grandeur, the castle was built in the 1860s for British financier Mitchell Henry and his wife, Margaret. They had honeymooned in the area and were drawn back, carving an estate into the rugged, remote territory.

An adjacent bog was reborn as a Victorian walled garden, six acres of neatly edged flower beds and vegetable rows, oriented on a slope for maximum sunlight and mountain views. After Margaret Henry died at age 45 from an illness contracted on a trip to Egypt, her husband had a Gothic church built in her honor.

Along a tree-lined trail, visitors stroll to these landmarks, or follow the paths on longer forest and mountain hikes. Tucked away from the tourist bustle, the Benedictines go about their contemplative lives in a setting ideal for looking inward—and upward, to the Sacred Heart statue on the mountain overlooking the abbey and beyond.

For nearly 90 years until 2010, the nuns operated an international boarding school on the site. Soon they will have an academic community among them again.

Notre Dame announced an affiliation with Kylemore Abbey in May. How the University will make use of its leased wing off the main castle remains to be determined, but the atmosphere seems to encourage reflective and immersive visits: retreats, spiritual introspection, creative inspiration, service projects, scientific field work. Partnerships with Irish and other European Catholic universities might also prosper here.

Unlike Notre Dame’s urban Global Gateways in Dublin, London, Rome, Jerusalem and Beijing, Kylemore Abbey’s rural location more than an hour from Galway promises a different type of experience. Such a departure from the University’s previous international centers brought some puzzled reactions to news of the partnership, but there’s a palpable connection in the character of the places.

Walking the Kylemore property, even as a tourist, feels a lot like wandering the quads and lake paths of the Notre Dame campus. There is a sense of being set off, removed from the immediate surroundings, inspired by grand historic architecture and calmed by carefully tended natural beauty. They are places of education and contemplation.

Superficially the settings could not be more different — forests and mountains imbue Kylemore with all the shades of Connemara green and streams burble down hillside channels into the lakes — but the shared spirit transcends geography.

For all that distinguishes it from Notre Dame itself and the University’s other centers abroad, Kylemore Abbey may become the international destination that feels most like home.