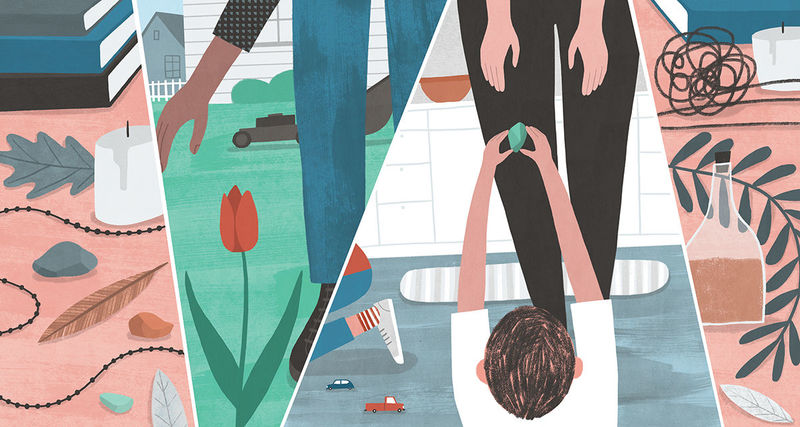 One of my father’s gifts is the ability to turn trees into works of art. To transmute God’s work into man’s and back again.

When our boys were young and our daughter not even a dream, my father made an altar for my family. He transported it in the back of his Jeep from Michigan to our new home in Arizona, having crafted this small piece of furniture from workshop-scrap oak and ash and maple. Distinctly mission in style, it fit neatly in one corner of our dining room. The family altar with its warm, golden stain became the dwelling place for our collections of Bibles, rosaries, art-class sculptures, prayer cards, votive candles and Aunt Addie’s needlepoint linens — all the Catholic-home accoutrements. It was tidy and prim and an heirloom-in-the-making.

As our two curious boys explored their foreign desert surroundings, more items found their way from sticky fingers to cargo pockets to the family altar. The tokens they gathered echoed the child. For Keenan, 2 at the time, it was usually something tiny or orange — a baby-bird feather, a rust-colored mesquite leaf, ripe prickly pear fruit or the hat from a rare desert acorn. For Brendan, then 6, it was rocks, always — fossils, chrysocolla, malachite, tektite, pyrite, jasper. These items became more than found objects. They reflected the way each boy experienced the world around him, and therefore how he experienced God.

I told the boys that God placed special things in their paths — things other people saw as nice, but to which they were uniquely drawn, as if they were calling each boy by name. These were the items they saw as exquisitely beautiful. They were God’s gifts, reminders of how much he loved them.

I went on to explain that these gifts were placed in their paths all day long — they just had to notice them. God kept saying, See that? Isn’t it beautiful? Pick it up. Don’t step over it. Notice it! Really see it! I am with you. I love you!

I said they should look to him and say, “Thank you for putting this here just for me. I love you, too.”

As our sons grew older, each found his own meaning in the family altar and became adept at spotting his own gifts. New items appeared as God brilliantly revealed his exquisite beauty and love.

Brendan left a corked vial of red sand on the altar. He spent his first-grade recesses sorting and sifting individual grains of playground sand and collecting only the red pieces. They were his precious “sand rubies,” and they were exquisitely beautiful.

Keenan left a ball of raw cotton collected from the side of an Arizona highway on the altar. After a desert windstorm blew acres of cotton into a barrier fence, we stopped the van and ran through the knee-deep “snow” in 100-degree heat. To Keenan, the cotton was exquisitely beautiful.

The family altar witnessed years of beauty flowing through our family. One evening, I was rushing to get dinner on the table for four children. Anthony was 3, and we just had celebrated Adriana’s first birthday. They were welcomed into our family through foster care. Mike was away with his job in athletics; I was working full-time at a foster care agency.

Our house was chaos: a TV reporting the evening news, Brendan playing on a Sit-n-Spin, Copper, our schnoodle, barking at Brendan, the microwave beeping and the three younger children lining all the Matchbox cars from lightest to darkest along the hallway between the kitchen and dining room.

Keenan was just weeks past his fourth birthday and had chosen this moment to show me a rock he had found at preschool.

“Yes,” I said absently as I stepped over the cars and a toddler in the hall on my way to the dining room.

“Yes, dear,” again as I walked back to the kitchen avoiding more Matchbox cars — and a preschooler.

“Mommy, see? The glittery!” Keenan had followed me from kitchen to dining room to kitchen again. I was annoyed, but I finally stopped moving and looked.

And then, I really looked.

The top of Keenan’s head barely reached my waist. Pale strawberry curls framed his cherubic face, soft and tender and round. His big-boy face, with its angles and edges, was still hidden deep inside. His delicate skin was so translucent that the warm, rosy glow in his cheeks seemed to emanate from somewhere beneath, between, within. Two pool-blue eyes, innocent and ancient both, were searching mine. My breathing stopped. I was transfixed by his beauty.

Keenan reached up to me, begging to be held. In one of his pudgy-dimply hands was a sparkling, glittery rose quartz.

See that? Isn’t it beautiful? Pick it up. Don’t step over it. Notice it! Really see it! I am with you. I love you!

I was stunned. I had spent years telling my children to look for gifts of exquisite beauty, and I had forgotten to look in my own path. I was stepping over the gifts God had placed before me, again and again and again.

God has given us the gift of seeing a beauty in each of our children that no one else has the eyes to see. Our children do not belong to us; they are a gift. Just like the bird feather or tektite, God finds the perfect way to reflect himself in our eyes as well.

It is in the eyes of my children that I am most often reminded of this. One child’s eyes are lakes of azure-grey that radiate splinters of glacial crystal from their centers. The intensity of his gaze and his spirit startle and unbalance me when they catch me unaware.

Another’s eyes are spheres of deep, molten amber. The fire that burns behind them adds a mesmerizing glow. I have yet to decide if this firelight escaping her soul emits from the constellations or the fireworks she possesses inside. Both options suit her disposition.

The last child’s eyes are a study in the sky’s blue contrasts. A ring of deep midnight encloses a center of pure noon — horizonless and cloudless and ceaseless and timeless. I asked him if I could paint his portrait, and his only request was that I paint him with wings so he could fly and touch heaven. No need, I thought, it is already reflected in his eyes.

The exquisite beauty we see in our children is really his presence alive in each one of us. On that harried fall evening, Keenan opened my eyes to the gift. Through the years, my father’s altar has taken on a new meaning — the altar and its lessons to be passed down through the generations. The piece of furniture in my dining room is not called a sand ruby altar, or a ball of raw cotton altar, or an acorn hat altar. It is called a family altar. It has taken me years to understand why.

Stacy Meade is an adjunct professor at the University of Oklahoma with a background in epidemiology and child-abuse prevention. She wrote this essay as a gift for her son Keenan’s 11th birthday.