Stepping off the plane in the Solukhumbu district of Nepal in 1973, Zeke O’Connor ’49 encountered a world previously confined to his imagination. The Himalayas’ stark, angular faces and the thick rhododendron forests seemed like mythic visions to the guy from the Bronx who had hardly experienced camping. He was struck, too, by the living conditions of the high hill country’s Sherpa people, who so kindly accepted him. They had limited healthcare and no electricity or running water. Despite the harsh mountain environment, many were living in thin shelters with thatched roofs held down by pieces of slate or large rocks.

O’Connor has returned 44 times to the region, which has become the beneficiary of those notable early impressions. 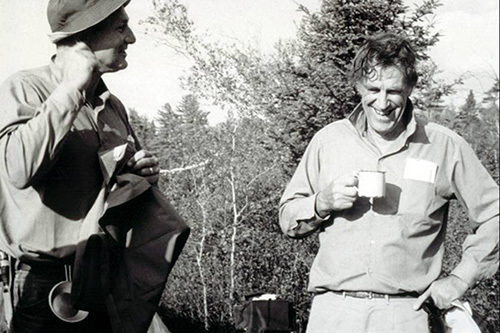 Today the Zeke O’Connor Community High School in Phaplu, Nepal, educates 90 Sherpa children. It features a library and computer lab, and in the next two years will add 11th and 12th grade advanced science courses. Students study, speak and write in English, as their traditional Sherpa language is oral, not written. The school is one of many area projects of the Sir Edmund Hillary Foundation (SEHF) of Canada, which O’Connor founded in 1976. Responding to the needs of the Sherpa people, the foundation focuses on the health and education of local residents and the care of their environment.

At Notre Dame, O’Connor began his football career in spring practice 1944 as a freshman under Coach Frank Leahy. He played for the All-America Football Conference’s Buffalo Bills and Cleveland Browns, and in 1952 he helped the Canadian Football League’s Toronto Argonauts win the Grey Cup. After football, he landed a job with Simpsons-Sears of Canada and later became the national marketing manager of sporting goods.

In that role he met Sir Edmund Hillary, who was advising Sears on its line of camping equipment. The famous New Zealand mountaineer and explorer, who in 1953 was the first climber to summit Mount Everest, along with his Sherpa guide Tenzing Norgay, had become a strong advocate for the Sherpa people and was seeking additional support. And so, along with other Sears executives, O’Connor found himself on a plane to Nepal.

Hillary and O’Connor formed a fast friendship, and by 1974 O’Connor was laying the groundwork for the Canadian foundation. Then, in 1975, the plane carrying Hillary’s wife, Louise, and daughter Belinda crashed soon after taking off from the Kathmandu airport. They had been headed to Phaplu to help the two men with the construction of a hospital. Though he already had supported Hillary’s work and mission, O’Connor recognized his friend’s need and adopted a deeper commitment to the cause. After founding SEHF, he served as its president for 30 years, until his daughter Karen O’Connor stepped into the position in 2007.

The 88-year-old executive director still keeps close tabs on the foundation. In his 2012 book, Journey with the Sherpas, The Story of Zeke O’Connor and the Sir Edmund Hillary Foundation, he relays some of his adventures with Hillary and details the foundation’s history and work. Projects have included the construction or expansion of 17 schools, reforestation efforts, women’s literacy classes, the addition of 13 medical clinics, scholarships for Sherpa medical school students, and the renovation and expansion of Kunde Hospital. Once staffed by overseas volunteers, the hospital is now operated exclusively by local doctors and staff. It serves roughly 4,000 Sherpa families and is accessible to more than 36,000 trekkers in the area.

O’Connor says he hopes he’ll return to Solukhumbu, where “it’s like going back to family.” But he didn’t always feel that way, he admits. Disabled by altitude sickness days into that initial visit, he thought he might never go back. “Then Sir Ed talked me into visiting Kunde hospital, and that was it,” O’Connor says. “Go in two or three times, and you get hooked. . . . And you realize you’re lucky enough to help.”