Editor’s note: Published in June 2016, A Letter to My Freshman Self is an anthology of 65 personal letters that Notre Dame alumni spanning 60 graduating years up to the Class of 2016 addressed to themselves as freshmen. Edited by Lily Kang ’16 and Ian Tembe ’17, the letters reflect on often complex undergraduate experiences and offer wisdom to help undergraduates make the most of these transformative years of their lives.

It’s Sunday afternoon of Orientation Weekend, and here you are in front of Knott Hall, arms around your two new roommates. You’re wearing a light blue polo and cargo shorts. (Just as a heads up, you’ll realize within the next week that those cargo shorts are definitely not in style. Cargo pants will be back in style by your senior year, but in a different, hipster sort of way and let’s be real — you’re far from hipster). You smile awkwardly, and Mom snaps pictures for posterity. 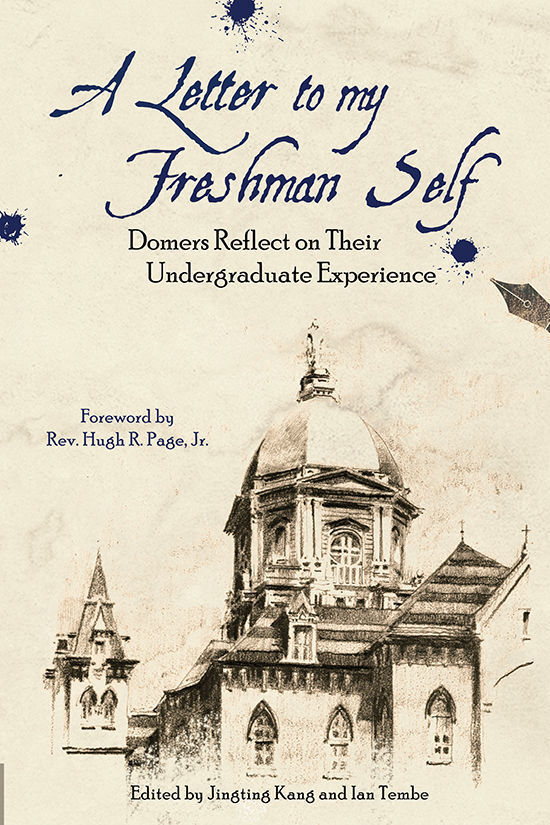 In a few minutes, there will be no more stalling, no way around it, and you’ll have to walk Mom and Dad out to the minivan for their drive back to Minneapolis. Fair warning: Mom will cry, just as you suspected. But you’ll also see a shimmer in Dad’s eye too, and, well, you just won’t be prepared for that. So you’re going to get a bit teary too. You’ll give them long hugs, turn away, and then pull yourself together as you head back to Knott Hall. Call Mom and Dad often — to pick you up in the bad times, to be proud of you in the good ones, and to just say hello.

Then you’ll walk back into Knott Hall. At that point, Marion Burk Knott Hall will appear little more than a collection of white painted cinder blocks, seemingly constructed in the Soviet architectural tradition. But don’t count out Knott Hall. The white walls might not be much, but the hooligans running around inside those cinder blocks wearing blazing orange beanies and tuxedo t-shirts will become your best friends. The shenanigans will be legendary — claiming the land outside of the dorm as Knott Quadrangle, donning suits and ties for a 7-course dinner in North Dining Hall on a Friday evening in February, belting out tunes from Mulan at dorm parties. I could go on, but you get the idea: it’s going to be a good time. You should invest time and energy in those friendships and get involved in your community. Few times in your life will you get to be a part of a community so tight-knit.

At 10:00 that first night, you’ll walk into Knott Hall’s St. Elizabeth Ann Seton Chapel for the first of many Knott Hall Masses. When it comes time for the Sign of Peace, you’ll go for the handshake only to get some strange looks from upperclassmen as they go in for the hug. Give it a month or two and you’ll be hugging everyone in the joint. And come back to the chapel when it’s empty at night or head over to the Grotto. Between the football games, the dorm parties, the lectures, and the packed dining halls, there will be a lot of noise over the next four years; be sure to make time for quiet and prayer.

Then finally on Tuesday, you’ll get around to the main course, and you’ll head off to class for the first time. You’ll move from science to calculus to philosophy to a literature seminar to economics. Like all the other nerds (and I mean that in the best way possible) at this place you’ll work hard to get good grades. But soon enough you’ll meet your first defeat, in the form of a Calculus II exam that not even the wonderful pedagogy of the Italian dynamo Prof. Claudia Polini could save you from. Brush it off and try to remember that learning is good in itself, not because it gets you a grade. Explore different disciplines. By the end of senior year your favorite courses will include an unexpected, eclectic mix of Dostoyevsky, American intellectual history (pre-1870 of course), microeconomics, and political theory.

In a few short months, after the winter permacloud has descended into the greater Michiana area, finals will arrive and an anxious energy will be palpable on campus. In fact, in a couple days, you’ll be so nervous and worried about your exams that you’ll find it hard to study. Take a deep breath, kid. These are the times when you have to realize you can’t do it all on your own. Lean on your friends, your RA, your professors — you might not see it yet, but a lot of people are pulling for you. And in the end, those relationships are what you’ll take with you when they kick you out of this place, degree in hand, four years from now. You can’t take the Golden Dome or Notre Dame stadium or the Grotto with you. But the friendships you’ll carry with you, and by that point, the blessing that is a Notre Dame education will have shaped you, changed you, for the better.

Now, please, go take those cargo shorts off. You’re embarrassing your future self.

Andrew Weiler studied economics, politics and philosophy at Notre Dame and was a founding member of the Jubilee Initiative for Financial Inclusion (JIFFI), a student-run microfinance group that works to provide an alternative to predatory lending in South Bend.