When he was 22, Rourke O’Brien’s life plan was relatively straightforward. “I wanted to put on a suit and tie and make money,” he says.

O’Brien ’78 was thrilled when he landed a job as a stockbroker in his hometown of Bellevue, Washington. He stayed in the world of finance for more than 20 years, eventually co-founding a securities firm and a mortgage business.

Then came 2001. The stock market crashed. Terrorists attacked the United States. And O’Brien agonized over the meaning of his life.

“I wanted to do something more purposeful,” he says.

In his mid-40s, O’Brien turned that midlife crisis into active volunteerism. “I went from an ‘I’ focus to an ‘other’ focus,” he says. The move started when he chaired the social concerns committee of his parish church in Bellevue, Sacred Heart. The group organized Together We Build (TWB), a Habitat for Humanity interfaith project that involved volunteers from the area’s Jewish, Muslim and Christian communities. 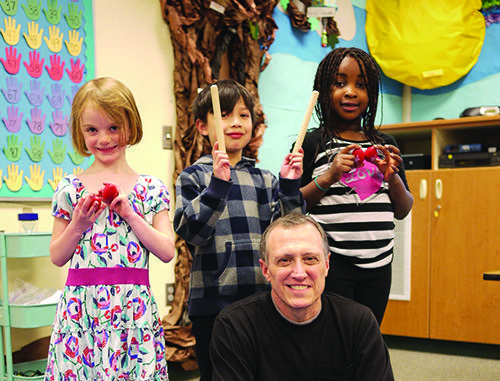 In September of 2003, O’Brien met with two Notre Dame theology professors, Rabbi Michael Signer and John Cavadini, to help design a service-learning seminar for students. Participants would join an ongoing TWB project that would expose them to members of other religious faiths, with follow-up classes focused on Catholic understanding of other religions.

Rabbi Signer, says O’Brien, “taught me more things about Catholicism than anybody else I ever met.” And the course discussions with Cavadini, he says, served as “the catalyst for what I wound up doing for the next 12 or 13 years.”

What he did in early 2004 was serve as executive director of America’s Foundation for Chess. The Seattle-based nonprofit, which uses chess to boost creative thinking, then served about a thousand kids in the Washington state area. While helping the foundation grow across the country, O’Brien says, he also was learning more about what he still wanted to accomplish.

At age 52, he began playing with an idea he thought would also help further the education of young children. In February 2009, his Children’s Music Foundation (CMF) orchestrated its First Note program. O’Brien finally had developed a nonprofit that harmonized with his desire for a job with a sense of purpose.

“I sit in these little dinky chairs in classrooms,” he says, “and I get to see these kids participating in joyful learning.”

Designed for ages 4 to 6, the First Note program is used by more than 320 classrooms in 44 states, says O’Brien. The multimedia curriculum, which features lively video instruction by Miss Melody, fits the core music education standards mandated in most states.

“I still have that drive; I would love to have a million kids in this program right now,” says the man who is no longer tied down to formal office wear. But when meetings take him to banks or financial industry offices, O’Brien says one thought always hits him: “Did I really live in this world for that long?”