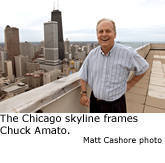 Chuck Amato Jr. ’70, used to be a lawyer. He used to run marathons. And for no other reason than it was a blast, he used to drop everything he was doing and volunteer at the Olympics. He used to read newspapers. And speak in complete sentences. And not need a roommate to help him get through the day.

Amato, 54, a tall and imposing man with soft eyes and an easy smile, has lived two lives — with a fault line that is easy to see. It runs through the evening of December 7, 1981, when a blood vessel in his brain simply blew open and left him in a crumpled heap outside a Christmas party in Oakland, California.

He awoke from a coma six weeks later to a life far removed from his studies at Notre Dame, his graduation from law school in Chicago and his work in the trenches of New Orleans, where he fought to improve housing conditions for the poor. At the still-getting-started-age of 33, he was suddenly unable to use his right side or speak any words.

He had arrived at this awful place as one of the crowd, no more or less remarkable than the other bright lights who leave the Golden Dome behind each May to take on the world. He never invented anything, or made millions, or sat across from Larry King. But what he’s done since that fateful day has amazed medical professionals, inspired all who know him and demonstrated the quiet power of the human spirit.

When he eventually showed up at the rehab center in his hometown of Norwalk, Ohio, no one expected much. “You don’t see tremendous gains in people with severe strokes,” says Lorna Strayer, then a speech therapist at the clinic. Amato, however, would not be a normal patient. He worked tirelessly for years to regain at least part of what the stroke had taken from him: the ability to articulate the words he knew in his mind. He struggled through one verbal exercise after another and at one point resorted simply to memorizing thousands of words. “He just never stopped,” marvels Strayer.

“He’s a remarkable person,” says law school friend Tom Leahy ‘73. "He’s never shown any anger about his condition and has just kept working to overcome it."

What drove Chuck Amato perhaps more than anything else, those closest to him say, was the fact that he had lost the essence of who he was. Piling up friends through life like cordwood, he was an outgoing, gregarious backslapper with an insatiable appetite for human contact — who suddenly found himself unable to look at a coffee mug and say what it was. He simply had to get some of that back.

Amato himself is not big on so much self-analysis. Asked what has pushed him so hard, he thinks for a moment and then shrugs. “No good,” he says, referring to the life that seemed to await him after his medical crisis.

He is sitting in front of a tray of Danishes at a tiny round table in his small apartment overlooking downtown Chicago. That he is even here serving breakfast on an early Saturday morning is a testament to how far he has come. While most major stroke patients live out their days under the constant care of others, Amato was determined to return eventually to a life on his own. In 1998, he headed to the Windy City — home to a number of family and friends — where he got a government-subsidized place and a part-time job doing clerical work at the American Bar Association.

He also started gulping down life again as best he could. Anxious to see more of the world, the one-time Olympics groupie just returned from a tour of Europe with a local church group. He e-mails friends constantly, trades jokes with his doormen, and attends as many jazz concerts as possible. He’s even taken up a cause — more wheelchair accessibility in his neighborhood. Amato uses an electric scooter to get around and insists that crossing many of the curbs near his home is murder. “They’re terrible,” he says, waving his left hand and adding that he’s still trying to get his alderman to pay more attention to the matter.

As far as he’s come, however, it is clear that he will never return to the other side of that fault line. He endures a host of stroke-related physical ailments and relies on a roommate, who lives rent free in return for aiding with a number of daily tasks. Worst of all, he still struggles to communicate. He has difficulty reading and writing. Talking requires work. On that cool spring morning when he eagerly entertains a breakfast guest, most words fall from his mouth like cement blocks, and his face often fills with frustration as he reaches an idea that he can’t quite pull from his brain.

Of course, he vows to continue pulling anyway. “I gotta keep at it,” he says matter-of-factly. “Or else what’s the point.”