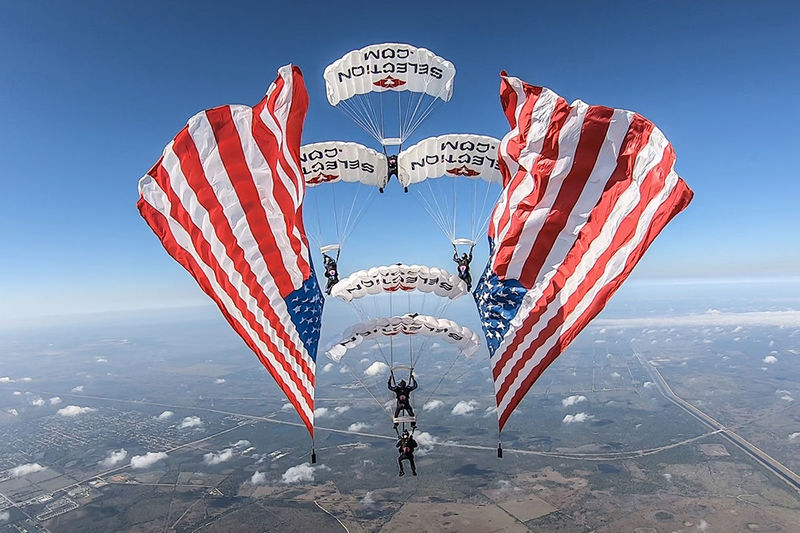 Nicole Condrey ’04 is the mayor of Middletown, Ohio, a city of 48,000 people to which she had no connection until 2017, when she moved there with her husband. The reason the couple landed in Middletown — to become professional skydivers — might seem to highlight the most unusual of Condrey’s pursuits, but to her, running for office represents a much greater departure from the norm than strapping on a parachute and jumping out of an airplane.

Skydiving had brought Condrey and her husband together. When they met, Ron, an explosive ordinance disposal technician in the U.S. Navy, was a skydiving instructor who worked with Nicole’s brother. Nicole, then a foreign service officer in the State Department, wanted a skydiving license. After Ron’s 2017 retirement from the Navy, the Condreys spent much of their time together airborne, with chutes open.

They moved to Middletown to join Team Fastrax, the biggest and most active skydiving team in the country. “We said, let’s pursue this crazy dream of being pro skydivers,” says Condrey, who also serves as the general manager of Start Skydiving, based at the Middletown airport.

Part of the impetus for the move, she says, was their hope that the activity could help Ron recover from the traumatic brain injuries and post-traumatic stress he suffered during his military service from a helicopter crash, a Humvee rollover and exposure to explosives.

“His last few years of Navy service were focused on trying to overcome his injuries,” she explains. “We were making efforts in different programs, but he wasn’t healing.”

Research suggested that physical activity could help the brain recover, so Ron thought skydiving might be therapeutic. Instead, his symptoms worsened. Organizing his time was an ordeal, and simple tasks could take hours to complete.

Then, in September 2018, a little over a year after they moved to Middletown, Ron took his own life.

“Ron was the strongest person I ever knew and will ever know,” Nicole Condrey says. “After he died, everyone kept saying, ‘What are you going to do?’ They knew me as this highly functioning person, but he still inspires me all the time. I took the lessons that he taught me of how to struggle well.”

Her husband’s experience has made Condrey an advocate for brain research in his honor, working on behalf of the Brain Bank at Boston University and the Concussion Legacy Foundation. A postmortem examination of Ron’s brain offered little conclusive evidence of damage, reinforcing for Condrey the importance of supporting more advanced research — which means providing scientists with brains to study.

“Most people don’t know that your brain doesn’t get immediately donated if you’re an organ donor. You have to specify that,” says Condrey, who has ensured that her brain will be donated after her death. “Even if you didn’t have brain injuries, they still need baseline studies.”

In her globe-trotting career as a diplomat, Condrey spent time in Sudan, Afghanistan and Iraq. She’s already established deep roots in Middletown, mostly through community outreach for Team Fastrax and Start Skydiving. Today she sells skydiving with a simple message: “I don’t know anyone who has ever regretted it.”

Condrey’s personality and community commitment led people to encourage her to run for mayor. She dismissed the idea at first. Politics was not her thing, she insisted — she earned an electrical engineering degree at Notre Dame — and Ron would have “laughed his butt off.” The more she thought about it, though, the more realistic it seemed.

“I took a step back and saw there were so many good things I could do as a leader in that capacity,” she says. “It wasn’t on my 10- or 20- or even 100-year plan, but I’m not someone who shies away from a purposeful challenge. I’m a believer that when opportunities come across, you don’t turn it down just because it wasn’t on your plan.”

She ran on a platform emphasizing education and economic development and was elected to the part-time executive position in November, unseating a 12-year incumbent and taking office in December. The new mayor describes Middletown as a steel town that was hit hard by the opioid crisis and never fully recovered from the 2008 recession.

Since Ron’s death, Condrey, a veteran of more than 1,800 jumps, has become an even more active skydiver, adding a new credit to her resume — member of the United States Parachute Team. The team, which trains year-round and competes internationally, differs from Team Fastrax, which mostly performs demonstration jumps that involve carrying American flags into venues. With the national team, Condrey will represent the U.S. this August in the World Parachuting Championships in Russia, a competition that features team events like formation jumps and individual artistic, speed and accuracy jumps.

“One of the biggest honors you can have is to bring that flag into a venue with tens of thousands and help them remember what our freedoms represent,” Condrey says of the jumps she does with Team Fastrax, which sometimes include smoke displays or fireworks shot off from the parachuters’ legs. She also does jumps with Ron’s service dog, Via, her constant companion.

Representing her country means a lot to Condrey, but the commitment involved in joining the national team gave her pause. “I never looked at myself as someone who would spend hours training to get a medal, but there are so many people out there who need inspiration,” she says. “I learned how to use my own story to motivate people and get them outside their comfort zones.”

Grace McDermott, a junior American studies and French major from Chicago, was this magazine’s fall semester intern in 2019.