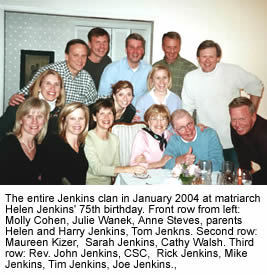 The family of Harry and Helen Jenkins of Omaha, Nebraska, is interesting for more than having produced the future president of Notre Dame, Father John Jenkins, CSC. Some details:

- In the early 1960s, one of their neighbors was Ken Woodward ’57, later a religion writer at Newsweek.

- The only other religious in the family is an uncle on Helen Jenkins’ side, Father Robert Condon, a diocesan priest in Sioux City, Iowa.

- Two of Father Jenkins’ in-laws are Lutherans (including Steves), and one is Jewish. Another Jewish man will be marrying youngest sibling Sarah this summer. Father Jenkins will officiate.

- Glenn Walsh, husband of the second-youngest sibling Cathy, is in the Army and serving in Afghanistan.

- Older brother Tom ‘74 is the only other Notre Dame alum among the siblings, but seven of Father Jenkins’ nieces and nephews have attended. They are: Tom’s fraternal twin daughters Kari ’02 and Erin ’02; and all five children of first-born Maureen (Jenkins) Kizer: Bob ’97, Rich ’98 (married to Becca Daulton ’98), Angie ’99, Margie (Kizer) Burns ’00 (married to Nick Burns ’00). Clare Kizer will be a sophomore this fall.

Tim Jenkins is a cattleman in Steamboat Springs, Colorado, and married to the former Mary Easterday ’85.