When Joseph Cashore ’71 came back to Notre Dame to perform his marionette show at reunion festivities, his classmate Tim DiPiero ’71 took a pass. 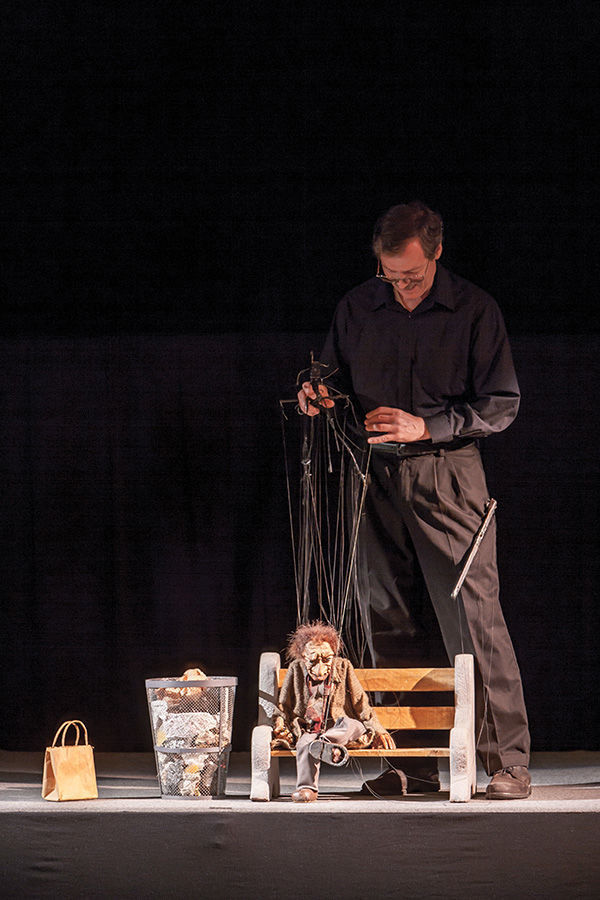 DiPiero jokes that the choice between going to see a “puppet show” or hanging out in the beer tent with his buddies wasn’t a difficult decision. But he heard friends who did go rave about it later, so he was determined to see the show at the next reunion.

DiPiero, like many who see Cashore’s shows, says he was “blown away.”

This is not your children’s puppet show. Cashore’s sketches hit on such themes as parental love, procrastination, frustration and compassion. He travels the country performing at colleges, theaters and festivals for adult audiences.

At the end of the show, “your heart feels full,” says DiPiero, who enjoyed the performance so much that he arranged for Cashore to do shows in West Virginia, where DiPiero is an attorney.

Tom Barkes, the business program manager at Notre Dame’s DeBartolo Performing Arts Center, was amazed, too. “It certainly changed my conception of what marionettes are,” Barkes says. “It’s interesting from an artistic standpoint, seeing the design and craftsmanship of the marionettes. The vignettes are well-scripted, so you become engaged with the characters.” 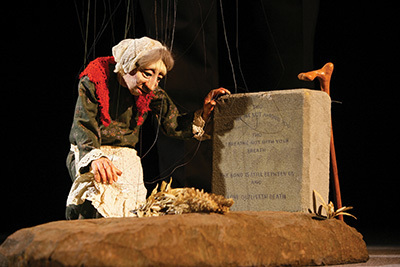 The 66-year-old Cashore says his fine arts degree at Notre Dame has helped as he designs the marionettes and their complicated controls — some have 44 strings — and paints them and makes costumes.

“I try to make innovative controls. I try to get a quality of movement that hasn’t been seen before,” says Cashore

His fascination with the stringed puppets started as a child. Visiting the Jersey Shore from his family’s home in suburban Philadelphia, he spied a pirate marionette dangling from a shop ceiling. He wasn’t allowed to touch but he never forgot it. He fashioned his own crude version from a tin can, clothespins and wood blocks. As simple as it was, occasionally it gave him the magical impression that it was alive.

As an adult he decided to make a realistic marionette and kept tinkering to find ways to improve it. He was struggling to make a living as a painter after graduation, doing carpentry on the side, when he fell in with fellow marionette enthusiasts. They did shows together until everyone else “got real jobs,” Cashore says. But the sister of one of them stuck around and married him in 1982. “I’ve always wished I had a third hand” to control marionettes, Cashore says. Now he has two extra hands as his wife, Wilma, performs with him and runs the business and technology end of their operation.

Cashore’s career took off in the 1990s when an agent spotted him at an international showcase. After the performance, people were trying to book his act before he even got back to the elevator. “That’s the first time I realized this is actually going to work,” he says. “We can make a living doing this.”

The Cashores travel from their Colmar, Pennsylvania, home for much of the year except summer, when he tinkers with new and old marionettes, and works on new material. They now tour only by van, since getting through airport security with precisely packed boxes of marionettes has become too difficult. Their daughter, Lex, is grown now but as a child accompanied them on many trips, including a few to shows in Europe and Japan.

Besides performing, Cashore focuses his creative efforts on the look and action of the puppets. Foam, feathers, lead and other materials help each of his 150 marionettes move like they are independent creatures. The boy with the kite tugs hard against the wind; the fussy baby’s feet kick as its mother lifts it high; and the homeless man’s toes wiggle, visible through the hole in the bottom of his shoe.

“I’ve been trying to make a marionette that can sustain that illusion that it’s alive,” Cashore says. “It’s a riveting thing.” He’s proudest of the marionettes that look like they are carrying their own weight and move in innovative ways, like the running horse whose mane flutters behind him as he gallops or the elephant picking things up with its trunk.

Because Cashore taught himself, he felt free to develop types of controls for the puppets that no one else had tried. Although he read many books about marionette construction, the best teaching tool turned out to be experimentation.

One beauty of marionettes, he says, is that the audience understands the characters even though there’s very little speaking. A marionette, if done well, seems to have its own life. “There’s a purity about it. You have an empathy with the character you don’t have with a human actor. It’s because you do know it has no life outside what you’re seeing.”

The marionettes are 2 feet tall, so Cashore’s 90-minute show isn’t suited to massive halls. But there are plenty of venues of 500 seats and fewer, and he hopes someday to play at New York’s Lincoln Center. The winner of the Union Internationale de la Marionette-USA citation of excellence, the highest award for puppeteers, has no plans to retire — he still loves the magic of enchanting an audience, which stops paying attention to the guy pulling the strings as the characters reveal their stories.

DiPiero says he’s proud his friend had the “genius and courage” to make this his life’s work. “I tell him, ‘Go on America’s Got Talent.’ I want the whole country to see what he does.”

It’s even more entertaining than the reunion tent.

Tamara Lytle is a freelance writer based in the Washington, D.C., area.