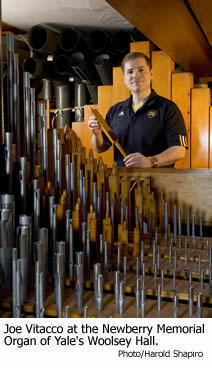 Joe Vitacco ’90 cringes over horror movies. It’s not the gore or the overwrought villains—it’s the ghoulish organ music he despises. “It’s a stereotype that Hollywood has created about the organ,” he says.

Creepy chords are not what you’ll hear on the pipe-organ CDs released by his label, JAV Recordings. The label is part of a continuing effort by Vitacco to “better the image and reputation of the pipe organ.” He wants people to appreciate the beauty of that soaring instrument, whose rich, complex notes are produced acoustically.

In an unusual analogy, Vitacco can even mix his enjoyment of Fighting Irish football with his dislike of untrained musicians toiling away on electronic organs: “If Notre Dame put talent similar to the stereotypical organ player on the football field, none of us alums would have to worry about winning tickets in the ticket lottery,” he says. While Vitacco himself can play the organ, he freely admits that his own skill “is at a B- level.”

Vitacco works full time as an executive recruiter for Ajilon Finance in New Jersey and runs his classical music recording company as a “labor of love.” He founded the recording company in 1997, with initial financial assistance from Thomas A. Coleman ’56, who died in 2000. “My mission,” Vitacco says, “was to record performances by the finest organists on the finest organs in the world.”

That mission has taken him to churches and schools across the United States and overseas to Paris and London, places that are home to either stately, finely restored pipe organs or new (and very expensive) ones. While his day job no longer allows for a lot of travel, he still oversees the projects, employing a recording engineer in the United States and another in Europe. Dan Madden ’03 creates art for the covers and booklets accompanying many of the CDs.

One of Vitacco’s recent projects is the Craig Cramer Plays the Paul Fritts Pipe Organ at the University of Notre Dame CD. Recording the new million-dollar organ at the DeBartolo Performing Arts Center, Vitacco says, was a way to give back to the University “for all the place and her alums have given to me.”

The CD features works by Johann Sebastian Bach, Pablo Bruna, Dieterich Buxtehude and others. Cramer, a Notre Dame professor of music, says he chose the pieces on the recording “to show off the many possibilities of the new Fritts organ,” an instrument he calls “stunning.”

For Vitacco, the CD also serves another purpose. Besides showcasing the Fritts organ, he says, it helps promote Notre Dame’s music program “so the most talented young musicians know that this is a place they should come to study.”

The Fritts organ CD and 70 other JAV recordings are available at pipeorgancds.com.