A young man goes to Paris as every young man should
There’s something in the air of France
that does a young man good.

I was barely 22 when I went to Paris, at once naive and brash, weary of studying and working for tuition, a “day hop” Siena College graduate anxious to get away from home. I tagged along with a college mate who planned to finish his French requirement at a summer course in the Sorbonne. It was 1963, and in my pocket was a one-way ticket and $400. A student ship took us from New York to Le Havre, then a train to Paris where I spent the first night in a park propped up against my brother’s Marine Corps duffle bag. I had not enough French, but enough spunk.

The next morning we met Bernadette. She was a tour guide standing outside the American Express office, a tourist mail drop in those years. Maybe we asked her directions, maybe advice on a cheap hotel. In a gesture of kindness she hustled us onto her tour bus and showed us the city. After work she introduced us to her fiancé, Jacques. They found us a room in the Left Bank — $2 a night each at the Windsor Hotel on Rue de l’Ancienne-Comédie — and took us to dinner where we met their friend Gerard. Chain-smoking, rumple-suited Gerard. We were quickly under their collective wing. 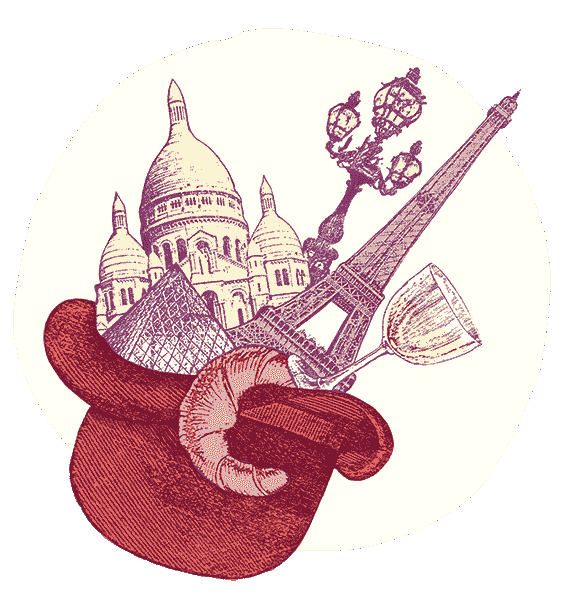 What ensued was extraordinary, especially for an Irish Catholic kid from a circumscribed urban neighborhood. How my worldview would shift and expand.

For survival money I got a job selling the Paris edition of The New York Times in the afternoons on the Champs-Élysées or the evenings in front of the Opera House, a grand baroque structure. I also corrected and typed letters in English for a small exporter and sold a series of articles on my experiences to my hometown paper. It paid the rent, provided money for espresso and beer, baguettes and camembert, and an occasional foray into Les Halles for onion soup and chilled white wine. I haunted the Louvre and the Rodin, practiced speaking my reader’s French, hung out in a café or two on Boulevard Saint-Germain, and explored the city’s parks, churches and gardens.

Most memorable were the late evenings in the cafés or in the small park at the tip of Île de la Cité with my newfound French friends and others: Mariah from Finland; a beautiful Caribbean girl from Barbados; a Brit who could play respectable jazz on his clarinet; a young Italian who had hung out in Harlem nightclubs — their names long forgotten. Youthful discussions of politics, religion, philosophy and music ranged on and on. My sense of America was challenged — our paranoia at domestic communism, our abysmal race relations, our consummate materialism all easy targets of idealistic youth. Despite their challenges, these young people revered the United States, loved our movies and our jazz, the hope and vibrancy of the youthful Kennedy administration, Martin Luther King’s appeal to our better selves.

An old man returns to Paris as ev’ry old man must.
He finds the winter winds blow cold.
His dreams have turned to dust.

I’d always wanted to return to Paris, but life made other demands and so it took 48 years. Now the Windsor Hotel on Rue de l’Ancienne-Comédie is gone. The etched stone plaque remains, letting the world know that the king’s court jesters lived on this street through most of the 18th century. The old restaurant across the street is still there, looking much smarter than I recalled. But precious little else is familiar, a once sleepy side street buried in an explosion of touristy commerce.

Boulevards Saint-Michel and Saint-Germain are still wide and busy, minus the rickety Renaults and rusty Deux Chevaux of the early ’60s. The side streets no longer provide quiet refuge. What a frenzy it has all become, the students who once sipped espressos in the cafés replaced by guide-toting tourists. Would Burroughs and Ginsberg find a suitable place to dally now? Would Sartre and de Beauvoir find a welcome table at Les Deux Magots? The Left Bank of Voltaire and Molière and Wilde is gone, replaced by gaggles of tourists pursuing their footsteps.

So, too, the museums. In that other time I stood within arm’s length of the Mona Lisa, but now she’s mobbed by a semicircle throng 50-feet deep. An unobstructed view was hopeless, so I turned my back to the dozens of phone cameras held high but offering little more than a periscope’s view of La Gioconda. I made my way back to the quarter-mile-long Grand Gallery to linger nearly alone with works by Raphael and Caravaggio — masters, not pop stars.

The crowds of the Louvre wore me down, so I made my way out and ambled to the old Opera house, intent on having lunch at the Café de la Paix, where I once sold The Times to patrons and where I couldn’t afford an espresso. I still couldn’t, so I opted for an outside table at an intimate café down the street. There I stalked the ghosts over soupe à l’oignon gratinée and chilled vin blanc.

Memories surfaced despite my faulty recall of a more expansive Place de l’Opéra, of longer steps for an opera crowd in evening dress to ascend. In this same mind’s eye I spotted the old woman beggar I came to know through repeated evenings of eye contact and smiles. She’d plop herself at the Métro stop, hand held out for hours in supplication. One night she waved me over to ask how I’d done selling my papers. “Fine,” I told her. Then, with a knowing smile, she parted the pleats of her long, thick, black skirt to reveal buckets of change in her lap. Despite her revelation I opted to continue my career in print media, occasionally enjoying explaining that my first job out of college was with the Paris edition of The New York Times.

I recalled the man who asked for directions and then complimented me on my facility with English. I thanked him and told him I’d been “educated in the States,” smug in the belief I had passed for a local. And the IBMer who was incredulous at what I was doing. He gave me his card and wrote a name and number on the back.

“Call my boss when you get back. IBM is looking for people like you.” I never followed up. I wasn’t a gray-flannel-suit guy.

Such daydreaming is an aging man’s exercise in nostalgia, something I promised myself to minimize. I don’t want to bore my family and friends by repeating oft-heard stories. Yet nostalgia is a necessary therapy when there are many more years behind than ahead. It helps us understand why we’ve become what we are, what happened after the forks in the road.

In my reminiscing that summer afternoon in Paris I was struck by how similar my family-raising, working-life years were to today’s Paris — hectic, intense, purpose-driven, squeezed full with people and activity.

And how similar my post-career years are to that carefree adventure in Paris so long ago. The evening of my life has granted me
a freedom unknown since youth, a freedom to pursue interests — to watch with pride the unfolding lives of our children; to revel in grandchildren’s antics, observations and conversations; to gain a richer understanding of music; to whittle down that list of books; and to travel. I can even plot and undertake occasional grand adventures, such as long-distance hikes and bicycle rides with old friends. My blessings have rekindled wonder.

I left Paris for the second time with an overwhelming sense of gratitude for a charmed life. Some of my youthful dreams turned to dust, it’s true, but others played out. From the Paris of my youth I had traveled on to Rome where I met my future wife. Forty-eight years, four children, seven grandchildren and a fulfilling career later I’ve lived a reality contained in few dreams of that 22-year-old.

Frank Cunningham’s articles have appeared in this magazine, America and U.S. Catholic. He retired as publisher and president of Ave Maria Press in 2005. Song lyrics are from “Raspberries, Strawberries” by Will Holt.