Cancer patients are often ambivalent about chemotherapy. On the one hand, the powerful drugs save and extend countless lives. On the other, they may cause nausea and vomiting so debilitating that patients sometimes postpone or even stop therapy.

Since the 1990s, however, a variety of drugs have been developed that curtail chemotherapy-induced queasiness. The problem is that these medications have been ridiculously expensive. Until now. 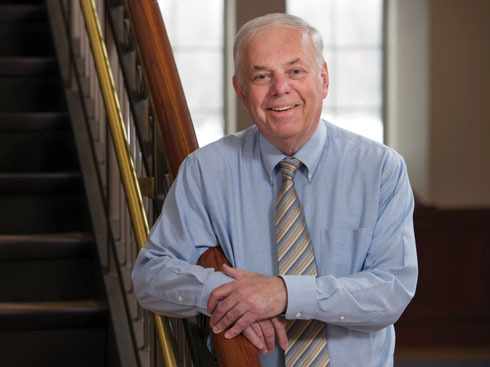 A series of studies recently conducted by Dr. Rudolph M. Navari ’66, the former clinical director of the Harper Cancer Research Institute, a joint effort of Notre Dame and the Indiana University School of Medicine, has demonstrated that a generic drug originally developed to treat schizophrenia and bipolar disorder also prevents the nausea and vomiting associated with chemotherapy. Best of all, the drug does it better than the standard treatment and at a fraction of the cost.

“Olanzapine is an older drug that’s now a generic, so it costs only about 45 cents a pill,” says Navari, who is now the director of the World Health Organization’s Cancer Care Program in Eastern Europe. “We give one pill before a patient receives chemotherapy and one pill a day for the three days afterwards. So basically the treatment costs $2, as opposed to around $3,000 for the standard regimen.”

Medicine has made gigantic strides in chemotherapy treatment in recent years, Navari notes. “The standard of care 15 years ago was simply to put patients to sleep while they received their chemotherapy. They had to be admitted to the hospital, so it was very expensive, as much as $30,000. [Patients] would be out of commission for up to a week.”

In contrast, chemotherapy today is administered on an outpatient basis. A patient can receive treatment one day and go to work the next. “This saves a lot of money and improves quality of life immensely,” the oncologist says.

Navari sees olanzapine as a further advance. “We’ve had some patients on the standard anti-emetic drugs who’ve had a terrible time with nausea. But when we switched them to olanzapine it was like a miracle.” Results have shown that 70 to 85 percent of the olanzapine patients gain significant relief, as opposed to 30 percent who receive the standard treatment.

The Harper Cancer Research Institute drug trials have been so promising that last September the National Comprehensive Cancer Network, a consortium of leading cancer care centers, issued a “best practice” guideline endorsing olanzapine as a superior treatment for relieving chemotherapy-induced nausea and vomiting.

Also, the National Cancer Institute recently awarded Navari a $2.1 million grant to conduct a clinical trial at 35 institutions across the United States to promote the use of olanzapine and monitor it for undetected side effects.

The former Notre Dame and IU cancer researcher, who will continue to manage the olanzapine study from WHO headquarters in Switzerland, is confident the drug will pass the test.

Since olanzapine has been used as an anti-psychotic for many years, its side effects — mainly weight gain and the possibility of Type II diabetes — are well known. Navari believes chemotherapy patients are unlikely to be at risk because they take the drug at a lower dose and for a much shorter duration than psychiatric patients.

“We only give olanzapine while someone is receiving chemotherapy,” he points out. “They only take the drug for four days or so, every month for a few months. At these levels the only side effect we’ve seen is sedation in some patients.”

Navari plans to explore whether olanzapine may offer even more medicinal benefits. His to-do list includes determining the proper dose for children as well as evaluating whether the drug might be useful for bone marrow transplant patients, who also experience nausea and vomiting.

Ironically, one of the negative side effects, weight gain, may have therapeutic use. A preliminary study Navari conducted several years ago suggested that advanced cancer patients who suffered severe weight loss and loss of appetite might be helped by olanzapine. “We haven’t explored that in depth, but may in the future,” he says.

John Monczunski, a freelance writer, was for many years an associate editor of this magazine.