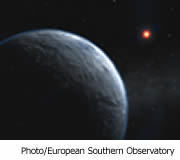 In our galaxy far, far away—20,000 light years, near the center of the Milky Way in the constellation Sagittarius, to be exact—an international team of astronomers that includes Notre Dame’s David Bennett recently discovered a planet that resembles Earth, albeit remotely.

The planet, officially known as OGLE-2005-BLG-390Lb, is rocky, unlike massive gaseous planets such as Jupiter, and has a thin, Earth-like atmosphere. But that’s as far as the resemblance goes. Scientists estimate the surface temperature of the distant world, which circles its star once every 10 years, at -364 degrees Fahrenheit, making it an unlikely home for life as we know it.

The planet was discovered using a technique known as “gravitational microlensing,” which was pioneered by Bennett and his colleagues. The system works like this: When two stars are perfectly aligned as seen from Earth, the gravitational field of the foreground star acts as a lens to magnify the background star. Astronomers don’t actually see the planet or the star that it is orbiting, but the effect of their gravity reveals the existence of the planet around the lens star.

“This new discovery provides a strong hint that low-mass planets may be more common than [large mass planets such as Jupiter],” Bennett says.