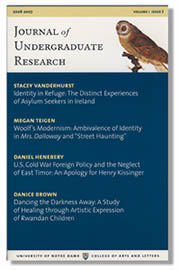 Sometimes the mark of a great idea is that it occurs to more than one person at a time. Such is the case with the Journal of Undergraduate Research, a student-driven, peer-reviewed annual in the College of Arts and Letters. Three years ago Hugh Page, then an associate dean, announced his interest in a publication that would recognize the best undergraduate scholarship in the college and promote interest in graduate study. That afternoon, in walked history major Marianne Magjuka ’05 with a vision for the new journal already worked out.

The rest is a tale of entrepreneurial talent and the relentless pursuit of quality. Magjuka passed the torch to Ben Dougherty ’06, who pushed for a professional look and feel and, supported by a $3,000 allocation from the college, produced 500 copies of a 92-page, perfect-bound publication that fits in well with the scholarly periodicals that line the shelves of the Hesburgh Library’s reading room. Vicki Toumayan, the associate dean advising the project, says she knows of about 20 such journals at U.S. universities.

“We want to establish ourselves in that [top] tier of undergraduate academic work, and this is a really good way to do it because it’s a tangible record of student achievement,” says Kelly Czaja ’07, one of two editors-in-chief on the journal’s third issue.

This year, Czaja ’07 and Gary Barnabo ’08 worked to get the most out of their 21-member editorial board in a labor-intensive essay evaluation process that lasted much of the spring semester. The result was four published essays in anthropology, English, history and interdisciplinary studies. Their subjects cover asylum seekers in contemporary Ireland, Virginia Woolf’s fiction, U.S. Cold War policy and the ways in which child survivors of the Rwandan genocide have found healing through music. An additional six essays were published on the journal’s website.

Czaja says the number of submissions nearly doubled this year to 70 and interest is quickly spreading through the college, reaching some departments that were under-represented in submissions to the first two issues. The journal is already being used as an admissions recruiting tool for select candidates, and Czaja says she’d like to see it get into the hands of alumni.

“We know that the Notre Dame student body is full of really smart and clever people, and most Arts and Letters students have some ability to put pen to paper and make something come out that’s worth it,” Barnabo says. “There has to be something to aspire to other than writing a paper and getting an A.”