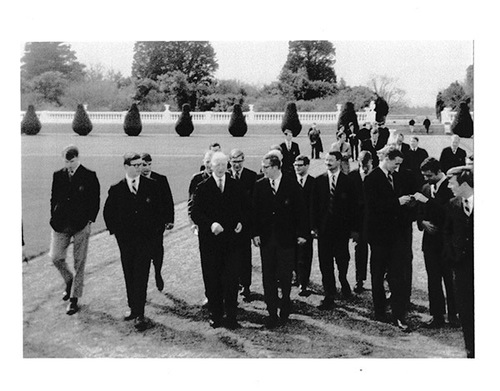 On a spring morning in 1968, as some 20 members of the Notre Dame Rugby Football Club prepared to depart for Ireland — the University’s first athletic trip to the country — they gathered at the Morris Inn for a goodbye breakfast and a blessing from Rev. Edmund P. Joyce, CSC.

“And gentlemen,” Mike Brennan ’69 recalls the school’s executive vice president and No. 1 athletic booster saying, “just remember that you are representing the University of Notre Dame and Our Lady. And if you guys screw up, do not bother coming back.”

The team returned with a 2-3 record, but the games against Irish college and regional teams were close and the opposition tough, “so we didn’t disgrace ourselves by any stretch,” says Tom Condon ’68.

Condon was one of a few student-athletes on the trip who later were grateful that Joyce did not get word of all of their off-the-field activities.

“The two wins were primarily because we were faster, more physical — and maybe they were more hungover,” Brennan says.

Thousands of people came out to watch the Fighting Irish and ask for autographs. Notre Dame’s nickname made the cheering ambiguous. Chants of “Come on Irish! Let’s go Irish!” from the Notre Dame sideline led to laughter and a feeling of home-field advantage all around.

“Now that’s sportsmanship,” one of the native-born Irishmen said. “They’re bloody rooting for us!”

A primary purpose of the trip was to learn from some of Ireland’s most skilled rugby players, an exposure to talent and experience that is today being revived through a new partnership between the Notre Dame club and the Irish Rugby Football Union (IRFU). Through exchanges of coaching expertise and — it is hoped — more matches in the future, IRFU hopes the alliance will spur renewed interest in Irish rugby among Irish-Americans, while Notre Dame benefits from working with the professional and polished IRFU coaches and staff.

“What we were exposed to there was a level of sophistication that we hadn’t seen before. They used a lot of plays, reverses, tactical kicking,” Condon says of the 1968 tour. “I think that in the four years that I played, we made two drop-kicks, maybe three, and University College Cork made three in the first half.” 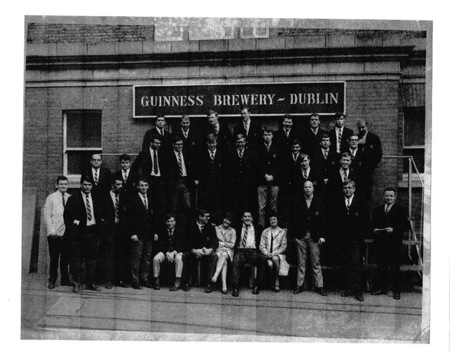 On the way from Cork to Dublin, the team went through Mitchelstown, ancestral home of the Condons. There, the returning son stepped off the bus and told the others to go on without him — he would catch up in the capital. Condon was still a common name in Mitchelstown, so he walked into the first store bearing it: a pharmacy.

“And they were thrilled to see me and closed the place,” he says. “They had a keg of Guinness, naturally, in the back, and a bunch of people came over. It was hard for me to get out of town.”

Even in Dublin, the Fighting Irish were the toast of the city. Éamon de Valera, a leader of the 1916 Easter Rising and longtime president of the Republic of Ireland, invited the Notre Dame players to lunch. They dressed for the occasion in blazers with rugby club patches. “Tried to look sharp,” Condon says.

At age 85, the elder statesman even joined the students for a rare excursion to Dublin’s Phoenix Park. “He never does this,” de Valera’s aide-de-camp told Brennan.

On their tour of the park, de Valera asked Brennan to stay close by, in case the president’s old eyes should lead him to stumble. In a photograph of the moment, it appears Brennan and de Valera are deep in conversation, but “we did not realize what a significant person he was — and the fact that we should have relished it,” says Brennan, who now has plenty of questions he’d have liked to ask.

The trip wasn’t all rugby matches and encounters with dignitaries. “There was a bit of mischief we engaged in,” Condon admits, launching into what is now a fun story, but which could have caused a lot of trouble — and angered at least one prominent priest back home — had it been discovered at the time.

“We boosted the flag off of the General Post Office in Dublin,” the headquarters of the Easter Rising, Condon says. “A couple of us went to the roof of the building, lined up in a formation, saluted the flag, took it down, folded it neatly. And we got it out of the country by putting it at the bottom of a laundry bag full of dirty rugby uniforms.”

To his knowledge the flag ended up at the University Club, the old campus restaurant frequented by faculty — including chaperones for the rugby club’s 1968 Ireland trip.

Rasmus S. Jorgensen is a former intern of this magazine. Contact him at rschjorgensen@gmail.com and @ReadRasmus.