On May 9, 2013, hundreds of men and women in uniform, their families and Hawaii residents lined the streets at Joint Base Pearl Harbor-Hickam as a C-17 Globemaster taxied to a halt on the tarmac. They watched in solemn silence as a six-man carry team in crisp ceremonial dress retrieved a brushed chrome casket adorned with the brilliant red, white and blue of our nation’s flag.

Inside the casket was U.S. Air Force Captain Reid Kijiro Nishizuka, a 2005 graduate of the Aerospace Engineering program at the University of Notre Dame and beloved friend. He died in service to his country on April 27, 2013, near Kandahar Air Base, Afghanistan, in support of Operation ENDURING FREEDOM. 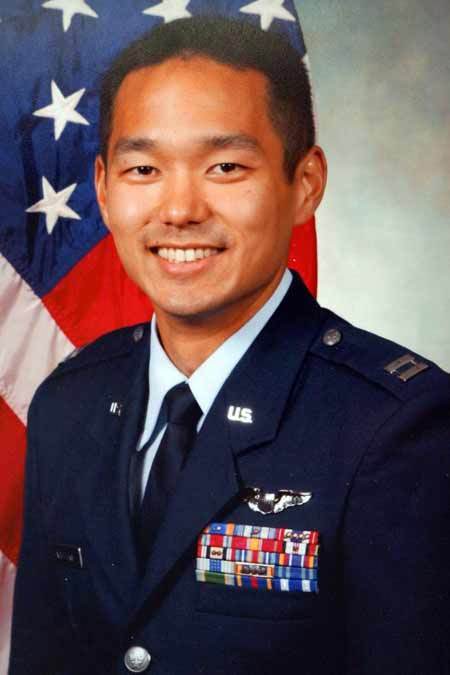 One cannot remember Reid without keenly feeling his loss in this world: he was a joyful person who was always ready with a smile and a helping hand. Hawaii native Dr. Malia Shimokawa (née Lam) ’02 says it best: “Even if he wasn’t in your life every day, he made a big impact.”

Due to the nature of military service, Reid wasn’t in our lives every day. Upon graduation from Notre Dame, Reid moved to Columbus Air Force Base, Mississippi, for pilot training. He completed training at Corpus Christi Naval Air Station, Texas, and proceeded to serve as an EC-130 pilot at Davis-Monthan Air Force Base, Arizona. Reid’s final assignment was to the 427th Reconnaissance Squadron at Beale Air Force Base, Calif. He is the recipient of 10 Air Medals, two Air Force Commendation Medals, two Air Force Achievement Medals, and, posthumously, the Bronze Star for Heroism.

Reid’s reputation among his fellow students and the Notre Dame staff was unquestioningly positive.

“He has always been such a wonderful, caring person,” writes U.S. Air Force Capt. Mark Jarotkiewicz, ’04. “He carried with him the greatest personality of happiness that I’ve ever known.”

Fellow Aerospace Engineering student Mike Trela ’04, says, “Reid always challenged those around him to do their best in the smallest ways and always brought joy to those around him. He will be missed by those he touched near and far.”

Father George Rozum ’61, rector of Alumni Hall, recalls Reid as a patriot dedicated to the protective mission of the Air Force: “I remember Reid as an exceptionally fine young man who was always, always respectful, very pleasant to be with,” says Rozum. “He will be greatly missed as an honorable alumnus of the University.”

During his time at Notre Dame, Reid was also an active member of the Hawaii Club, serving as the food coordinator during his junior and senior years. Fellow club member and O’ahu native Kahele Naeole ’04 says, “Reid was one of the nicest guys I knew, a man of character, honor and aloha. It really hurts to have someone like him taken away.”

Reid’s charisma and readiness to help was especially evident during his time as a cadet at Air Force ROTC Detachment 225. U.S. Air Force Captain Tabitha Rand (SMC ’05) says, “He was always willing to take the ‘upperclassman’ hat off and be the helpful guide anyone needed. He could put it all in perspective when you were feeling overwhelmed.”

In memory of Reid’s superior mentorship capabilities, cheerful disposition and utmost professionalism, Colonel Andrew Cernicky ’85, professor of aerospace studies at Air Force ROTC Detachment 225, has established the Reid Nishizuka Mentorship Award. It will be awarded to a graduating cadet annually.

“We were all deeply moved and troubled that Reid succumbed to the ultimate sacrifice, giving his life in pursuit of freedom,” says Cernicky. “He had a positive impact on everyone, especially those younger than him. There was an outpouring of support from his classmates for this endowment.”

Reid is survived by his father and stepmother, Ricky and Norene Nishizuka; his mother and stepfather, Karyn and Dr. Deane Hatakeyama; his brothers, U.S. Air Force Captain Chad Nishizuka and Reyn Nishizuka; his stepsisters Leinelle Baptista and Lyllis Manzano; his grandparents, Shizuichi and Masako Nishizuka, and Ruth Kushimaejo; and friend, Xavier Winters.

“He has always been there for me, in the good times and the bad,” says Winters. “His loss hit me hard.”

As his military family saluted their fallen brother-in-arms, we too remember Captain Reid Nishizuka this Memorial Day weekend in the name of God, of Country, and of Notre Dame.