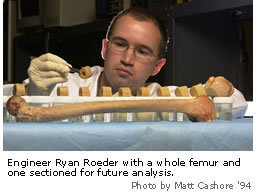 The last thing you expect an assistant professor of aerospace and mechanical engineering to show you is an X-ray, and the one in Ryan Roeder’s binder of overhead transparencies holds surprises of its own.

It shows a girl’s arm with something obviously missing — her humerus, the large bone normally found in the upper arm. The girl was born without most of the bone. Other X-rays on the transparency show the results of a surgical procedure to replace the missing bone segment with one taken from a cadaver. As is evident from the pictures, the operation was a success. Years later the arm looks perfectly normal.

A miracle? Hardly. It’s actually old news, according to Roeder: The procedure was performed back in the 1950s. Roeder uses the X-rays to show how well a young and growing body can fix itself with implanted bone, whether taken from the patient’s own body (the crest of the hip is a popular spot for harvesting small amounts) or taken from a bone bank of body parts donated to medical science.

Surgically implanting natural bone isn’t always practical, however. Not everyone is healthy enough to undergo the pair of surgeries required to move a bone from one part of their body to another. The problem with donated bone is that supplies are limited. And there’s always the possibility of disease contagion when you put someone else’s bone — or even an animal bone — into your body.

For these and other reasons Roeder is among a number of bioengineers trying to develop synthetic bone. It’s a task more difficult than one might imagine. Literally at their core, bones are blood factories, and science is nowhere near to replicating the manufacturing methods of bone marrow. For now Roeder is content with developing materials that behave mechanically like natural bone. Rather than replace an entire fibia or tibia, such materials would be used to patch the cortical or hard outer layer of damaged or diseased bones.

As Roeder explains, one of the difficulties in engineering a material like bone is that, unlike fiberglass or steel, bone is a living material. It’s composed of tiny, tightly bundled, blood-fed fibers with cells that are constantly being born and dying. The fibers are wound into bundles that are wound into other bundles and so on as in nautical rope. The vertical alignment of the fibers makes bones stronger lengthwise than side to side.

Roeder is a materials engineer whose earliest research involved a ceramic insulating material used in computer chips. As he explains, bones are a composite of a natural polymer, collagen, reinforced with a ceramic known as bone mineral. His proposed synthetic bone material is made up of high-density polyethylene (the raw material of milk jugs) reinforced with hydroxyapatite, the synthetic ceramic most similar to bone mineral.

His first success has been in getting the ceramic fibers to line up in the polyethylene the way the mineral crystals do in bone. That allows the synthetic to mimic the mechanical properties of the real thing. His next challenge will be to make the material porous like natural bone.

Roeder’s work is part of a growing body of research at Notre Dame involving biomechanics and biomaterials. The projects unite engineers, biologists and other faculty with researchers at private companies and medical schools. Notre Dame is ideally situated to enter into orthopedics research collaborations because six of the world’s largest orthopedic implant manufacturers are located in Warsaw, Indiana, less than an hour from campus.

Roeder envisions the development of not just one bone substitute but a range of materials to suit different parts of the body and patients of different ages. Synthetic bone, he says, may eventually serve as a kind of scaffold on which genetically engineered bone or other tissue could be grown in a lab. Implanted at the site of damage, the scaffold would give the tissue an advanced starting point for growing into the natural skeletal parts. Ideally the scaffold would then be remodeled by the body over time.