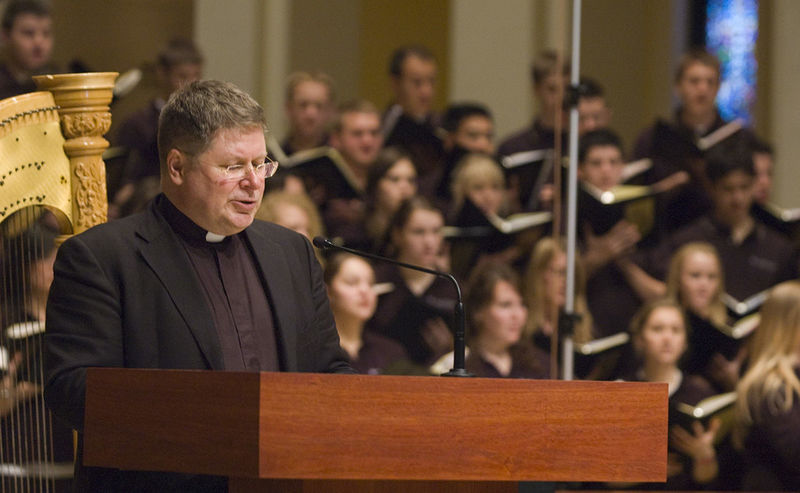 When Father Jan Michael Joncas ’78M.A. wrote the hymn “On Eagle’s Wings” in 1976, he intended to console a grieving family. Now, he says, in light of its recent turn in the national spotlight, its meaning has expanded.

The song had already come a long way from when Joncas first performed it in an Omaha, Nebraska, funeral home during the visitation for a friend’s father. Since then, it has been sung at the funerals of business magnates, the victims of terrorist attacks and even the late Italian opera star, Luciano Pavarotti.

Then Joe Biden quoted it in a speech declaring his victory in the 2020 presidential race.

“In the last days of the campaign, I began thinking about a hymn that means a lot to me and my family, particularly my deceased son Beau,” Biden said of the song on November 7. “It captures the faith that sustains me, and which I believe sustains America.”

For Joncas, Biden’s reference gave a new dimension to “On Eagle’s Wings.” While offering hope in moments of death and despair, the song may also encourage unity among the living, because, as Joncas says, “An eagle can’t fly except with both wings.”

Joncas grew up in Minnesota, one of eight children born to a father who did technical work in theaters and a mother whose singing often filled the home. The family wasn’t wealthy, so Joncas received music lessons from a religious sister who taught him in exchange for doing chores around the convent.

Those lessons influenced Joncas’ style, which, aside from its liturgical basis, is broad in scope. “I don’t have what people would call a distinctive compositional voice,” he says. “I can write a simple folk tune with a guitar accompaniment, or I can write [for] a chamber orchestra with full choir.”

After graduating from the University of St. Thomas in 1975, Joncas combined his knack for music with his love of the Catholic faith, working as a director of liturgy and music at a parish near Minneapolis. During the summers he attended Notre Dame, pursuing a graduate degree in liturgical studies. He fondly recalls studying by the lake and taking courses taught by professors Nathan Mitchell and Thomas Talley. He lived in Stanford and Zahm halls, the latter of which he shared with the men’s basketball team.

“You could hear every once in a while the dropping of basketballs on the floor,” he says with a laugh. “It was quite fun.”

After earning his master’s degree, Joncas became a priest in the Archdiocese of St. Paul and Minneapolis. He went on to earn a doctorate in liturgy from the Pontifical University of Sant’Anselmo in Rome and has spent his career as a professor back in the Twin Cities at his alma mater, St. Thomas.

“On Eagle’s Wings” — which draws its lyrics from Psalm 91, the Book of Exodus and the Gospel of St. Matthew — is Joncas’s most popular song to date, but the priest doesn’t have a favorite composition except, he says, whatever he’s working on at the moment.

His latest piece, though, is precious to him. He wrote “Shelter Me” in March 2020 at the start of the COVID-19 pandemic, and released it without royalties, meaning people could use the sheet music for free.

What happened next echoes the sensational release of “On Eagle’s Wings.”

“It just kind of took off on YouTube,” Joncas says, noting that ensembles from places as distant as Norway have recorded the piece.

While the two songs have gained widespread popularity, they draw much of their acclaim from a country and a Church that are increasingly polarized. Liturgical music itself is a divisive topic within the Catholic Church in the United States, Joncas acknowledges. While some churchgoers have modern tastes, others pine for the Latin hymns that comprised Catholic sacred music before the Second Vatican Council.

Aware of this division, Joncas tries to create music that appeals to both perspectives. One technique he uses is to write the refrain of a hymn in Latin and the verses in English, though he admits this approach does not recreate the environment of days gone by, when all the faithful could sing the same set of hymns by heart.

“Trying to find a unifying musical language is tough these days,” he says. “We have not only a great Latin heritage, but we’ve got now a vernacular heritage, with multiple vernaculars. So what do we do with that?”

Nevertheless, he hopes music will contribute to the healing of a fractured nation.

“You need both parts of the country working together,” he says, “for the eagle to soar.”

Jack Lyons, a senior studying theology and journalism, is a former intern for this magazine.