A few weeks ago, I got a call from my grandmother. 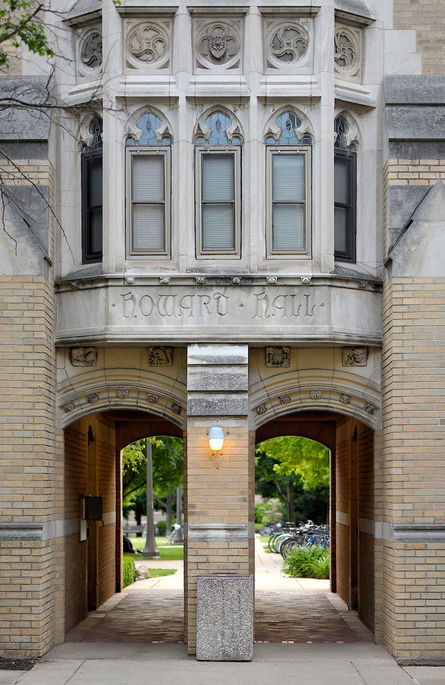 Howard Hall: home to the author and, now, her cousin. Photo by Matt Cashore '94

“You know my niece, Martha?” she asked.

Vaguely, I thought. As the youngest of 12 children, my grandma has dozens of nieces and nephews, many her own age and older, few of whom I’ve met — making “do you know my niece” a more difficult question than it sounds. But I dug through the Ms in my mental Rolodex of relatives. . . .Ah! Martha is the one with family in South Bend.

“Well, her great-niece is starting at Notre Dame this year as a freshman.”

“Her name is Sarah.”

If Grandma was hoping for a big reaction, she got it with that piece of news. A cousin I’d never heard of had the same first name as me, chose the same college that I did, and now had been randomly placed into the same dorm I lived in for four years? Talk about some entertaining cocktail banter.

In the enormous web that comprises my maternal grandmother’s family, relatives you’ve never heard of are relatively common. I asked my mother in working on this story just how many first cousins she has, and her word-for-word response was, “Oh God. No clue.” I know that one of them lives a few doors down from my parents — we saw him roughly once a year, when we trick-or-treated through the neighborhood on Halloween — and I could identify a handful of other members of the tribe from moments when I’d stumbled upon our shared genealogy. There was the classmate who barged into speech practice one day and announced she was my second cousin. There was the elderly couple who occasionally slipped me Crème Savers at church. Once, I’d heard that I was somehow related to one of the officers at NDSP.

I finally met this other Sarah last week, and we quickly pieced together our familial connection. Her great-grandmother was my grandmother’s sister, making us second cousins once removed. Not especially close relatives, but not that distant, either — on my dad’s side of the family, second cousins routinely show up at Thanksgiving and Christmas. I figured that the two of us wouldn’t have much in common beyond the Twilight-Zone coincidence of our name, college and dorm, but our stories were more similar than I anticipated.

We both came to Notre Dame from Indiana public high schools — Logansport for me, South Bend Clay for her — that don’t often send students here. Over lunch at Smashburger, we marveled at classmates who came to campus armed with a sibling in one dorm, a boyfriend in another, and a laundry list of friends and relatives who’d either gone to Notre Dame decades ago or were enrolled now. Like me, she had grown up visiting campus and dreaming of going to school here, but she is figuring out the student experience without much idea of what it will be like.

The similarities kept coming as we chatted about campus life. In the dining hall, her go-to so far has been grilled cheese sandwiches — a dish that appeared on my tray at least three times a week my freshman year — and she shares my amazement at freshman girls who arrive with the skill to concoct a decent salad. She expressed a similar wonderment at people who know where to find parties. I (a giant nerd) remember being terrified that someone would peer-pressure me into underage drinking, and she seems to feel the same way. A few Fridays ago, she said, many of her fellow Howard freshmen went together to some off-campus party, which was a huge score for Sarah and her friends — it left the lounge open for them to spend the night watching a movie.

Like me, Sarah likes Howard for its location, its strong community and its abundance of singles. Her room this year is directly below the room I lived in as a freshman, and she had the same can of Raid sitting on her desk as I did living in the middle of Cockroach Alley.

We two Sarahs certainly don’t have everything in common, but even if we shared nothing but a few genes, I think our common ancestors would be amazed to see us here. Eighty years ago, my grandmother and her sister were chasing chickens through the backyard in blue-collar Logansport, Indiana, to catch and eat for dinner. Today, their granddaughter and great-granddaughter can trade stories over veggie burgers of their time at one of the top universities in the country.

Next stop: figuring out what all those other cousins are up to.