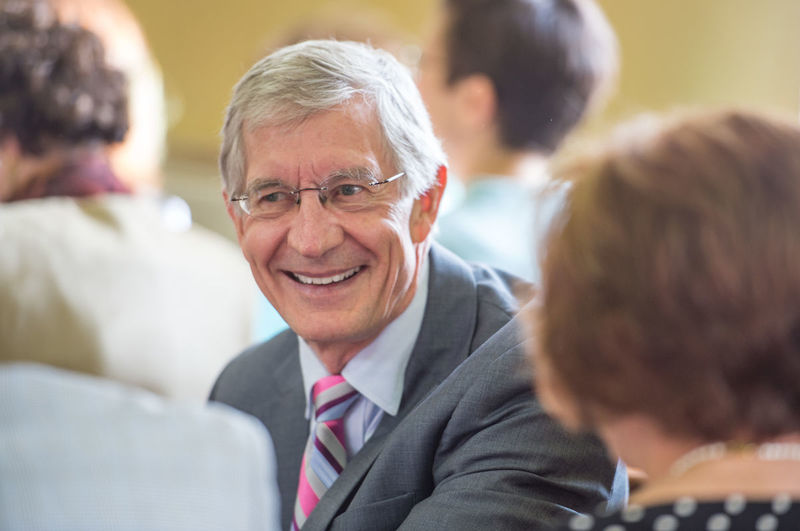 In 2005, Thomas G. Burish ’72 left the presidency of Washington and Lee University, one of the nation’s most prestigious liberal arts colleges, to return to his alma mater as provost. “Serving the Notre Dame family is a gift which has given great meaning to my life,” he said when announcing his decision last August to step down this summer as the University’s chief academic officer.

During the 15 intervening years, Burish has been at the center of academic advances as impressive as any in Notre Dame’s history. Respected by the faculty as an effective and visionary administrator, Burish has elevated the University’s academic profile and overseen campus enhancements that have bolstered Notre Dame’s research and scholarship at both the graduate and undergraduate levels.

During his tenure, annual research spending has grown from $79 million to $212 million, and the scope and significance of research initiatives, such as the Harper Cancer Research Institute and the Eck Institute for Global Health, have been strengthened by their collaborative, cross-disciplinary approach. Investments in the graduate school have more than doubled, and 15 graduate programs have been added. The provost also took a major step to translate academic research and student startup ideas into entrepreneurial ventures when he created the Idea Center to bring the intellectual property nurtured on campus to the marketplace.

To support the University’s burgeoning research and scholarship, more than half a dozen major, state-of-the-art academic facilities have been constructed, including the Jordan Hall of Science, Stinson-Remick Hall for engineering, McCourtney Hall for research in science and engineering, an expansion of the law school, O’Neill and Corbett halls housing music, psychology and anthropology in buildings adjoining the football stadium and Jenkins and Nanovic halls for the Keough School of Global Affairs.

The Keough School may well be the provost’s hallmark legacy. Burish, who has represented Notre Dame in talks with leaders in China, India and other nations, has made the University’s international dimension a priority as it aspires toward leadership in the 21st century world. The provost has encouraged the expansion of Notre Dame’s global gateways and centers under the direction of Michael Pippenger, head of Notre Dame International, and   envisioned the Keough School consolidating nine centers and institutes into a single cooperative under Scott Appleby ’78. While Notre Dame has long had an international dimension, the University’s ambition and reach have never been greater.

Burish has also been instrumental in fashioning Notre Dame’s undergraduate population into one of the nation’s finest, balancing scholarly credentials with an array of attributes to diversify and enrich the educational experience.

The native of Peshtigo, Wisconsin, earned his doctorate in clinical psychology from the University of Kansas in 1976 and spent 26 years on the faculty at Vanderbilt University, including a decade as provost there, before assuming the presidency at Washington and Lee. Burish is a distinguished scholar in clinical psychology and cancer research, the author or editor of several books and recipient of numerous teaching awards. He intends to resume his academic interests as he leaves his administrative duties.

Burish, who skillfully steered the academic enterprise through a trying spring semester, will be succeeded by Marie Lynn Miranda, a scholar in children’s environmental health who was provost at Rice University from 2015 to 2019.