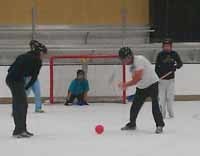 It was a Wednesday, a night when all our peers flocked to Finny’s for dollar pitchers and the bouncer with the boundless handlebar mustache. But we were coated in sweat and ice shavings from our broomball victory and decided an appropriate celebration would be to waddle to the Backer in our sweatpants and toast to an undefeated season. Alas, Narn had a test the next morning as it seemed he always did and Booya and Critter were determined to douse the flame of victory with a night in the library. And Jeff, well Jeff was underage so he sadly biked back to Duncan to do whatever the juniors did on Wednesday nights. My Hawaiian friend, her Air Force comrade and I, continued on.

The bar was nearly vacant, save a group of Colombian students shooting pool in the back. We sidled up to the bar and began a conversation with the bartender when we asked for a shot of whatever was in the neon pink bottle. Rhino, as he was mysteriously nicknamed, informed us it was called Kinky and he wouldn’t wish that drink upon his worst enemies. Interest piqued and we spent the rest of the night trying to weasel a sip of the liquor out of him. It really wasn’t that bad.

Somewhere in there we asked him if someone had to die to get the coveted Backer bartender gig. How right we were. He teared up and looked off and told us a sad tale of a friend who held the position before him. I remember how it ends but not how it got that way.

At some point Wagon Wheel by the Old Crow Medicine Show came on the speakers and I insisted I had learned to two-step the weekend prior. Learned was a rather loose term. My new buddy Trent wanted to learn and was trying to persuade me away from the Colombians who had scooted their stools uncomfortably close to mine and so he grabbed my hands and clumsily tried his hand at the footwork. His embarrassing dancing was matched by his even less elegant vocal rendition, which he insisted on singing the whole way back to campus. Before we parted, him to off-campus and me and my friend back to the dorms, he tried the steps one last time under the streetlight. I laughed and jogged away, ready to get warm.

Not too long after that night I was asked by my foul footed friend on a real date, luckily one without dancing. But to this day when we recount the beginnings of our relationship, we giggle and say it started over a Kinky shot, a sad bartender and a two-step blunder at the Backer.