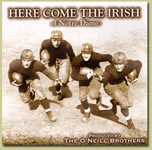 With the wearing of the green and a two-fisted leprechaun and the shouts of “Go Irish” and a campus phone book filled with Colleens and Seans and Patricks and Meghans, Notre Dame students and fans like to claim a kinship with the Emerald Isle.

Tim and his brother, Ryan ‘97 — the pianists record as The O’Neill Brothers — hope that changes with the release of their new CD, Here Come the Irish of Notre Dame.

The CD is half O’Neill Brothers, half compilation of previously released music by others. Its credits read like a virtual who’s who of traditional Irish musicians and bands with a connection to Notre Dame. The CD kicks off with “Here Come the Irish,” a popular song with the ND faithful that was released almost a decade ago by John Scully ‘81. Seamaisin, the band featured playing at Corby’s Bar in the movie Rudy, is present with musicians John Kennedy ’79, ’86M.A., ’90 Ph.D., Tim Fischer ’83, ’96, Steve Horst ’90 and others.

Yet another movie tie-in shows up on the CD with music from Gaelic Storm. That band was featured in the movie Titanic and counts Steven Wehmeyer ’92 as a member.

Not everyone heard on the CD is a musician. Paul Cusick ‘04, who toured with Riverdance, provides the percussion for “Victory,” a lilting Irish twist on the “Notre Dame Victory March” that was arranged by the O’Neill Brothers. The catchy music also features Sean Ryan ’95 and Kevin Fleming ’94, ’96M.A, ’99Ph.D.

Some members of the Notre Dame Club of Minnesota provide cheers on the “We Are . . . ND” track. And in “An Irish Blessing” Father Theodore Hesburgh, CSC, offers a traditional Irish benediction as “Notre Dame, Our Mother,” arranged by the O’Neills, plays softly.

The CD was released in conjunction with 2003’s The Shirt. Designed by Notre Dame students and sponsored by Student Activities and the Alumni Association, The Shirt is sold before the start of football season as a fund raiser for scholarships, student organizations and others in need.

The O’Neills were contacted by Hammes Notre Dame Bookstore manager Jim O’Connor last February, who wanted them to put the CD together in time to have it released when The Shirt went on sale. Amazingly, the duo pulled it off.

O’Neill says he started calling various musicians he knew in the Notre Dame area, and hit gold with John Kennedy, who was able to give him more names of those graduates specializing in traditional Irish music. O’Neill next played “the role of producer,” calling the musicians and asking for their CDs. “Then I had to make decisions on which songs to include and which not.”

More than a dozen Domers are represented on the CD, which may be purchased at the ND bookstore or through www.pianobrothers.com.