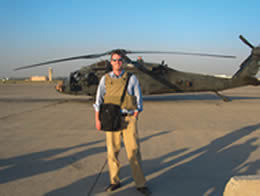 Stepping off a military helicopter with several Iraqi judges and prosecutors at the infamous Abu Ghraib prison compound, we were ushered into a makeshift courtroom by U.S. Army officers who were unfazed by the fact that we were nearly an hour late. After all, we had with us the key players in the scene that was about to unfold: Day Two of the Saddam Hussein trial.

On October 23, 2005, just four days after the media circus that accompanied Saddam’s first day in court, this emergency session was held to hear the testimony of a former Iraqi intelligence agent who was within days of dying from terminal lung cancer. Slumping slightly in his wheelchair and hooked up to an IV and a heart monitor, Wadah Khalil al-Sheikh was barely audible to those of us in the room. Leaning in close to hear Khalil’s words, the judges were intent on uncovering his role in the Dujayl case, the first of several cases brought before the Iraqi High Tribunal (IHT) that would illustrate war crimes, crimes against humanity and genocide perpetrated during Saddam’s 24-year regime. Khalil’s gasping statements were occasionally punctuated with a chortle of emotion, which eased fears of American observers that he might flatline during the proceedings. Mercifully, the judges finished their questioning early, and we were once again aboard a Blackhawk helicopter cruising over Baghdad en route to the Green Zone.

This particular day in Iraq ranks among the most dramatic when I survey my memories of 15 months spent working on the trials of Saddam Hussein and other former regime leaders. It took place just two months after I arrived in country, where I had a front-row seat to the biggest international trial since Nuremberg.

In July 2005, I was summoned to the offices of the U.S. deputy attorney general in the Main Justice Building in Washington, D.C. There I met the incoming regime crimes liaison, whose office (RCLO) had primary responsibility for assisting and advising the Iraqi court trying Saddam. I had been working for the Department of Justice as a paralegal-cum-foreign liaison since graduating Notre Dame in 2003 and had been responding enthusiastically to department-wide requests for volunteers to staff the RCLO. Now there was a need for paralegals. Having already passed an initial interview with Justice Department officials in D.C., I was told that they wanted me in Baghdad as soon as possible for a six-month detail. Despite reservations about the situation in Iraq, I was thrilled at the opportunity to live overseas, to work on a major foreign policy initiative and to be a witness to history. Less than a month later, I said goodbye to my life in Washington, D.C., and set off for the Middle East.

In the Green Zone
The steep spiraling descent, necessary to deter enemy fire, into Baghdad International Airport, followed by an exhilarating first ride on a Blackhawk to the Green Zone, leave no doubt in the newcomer’s mind that this is a very different world. What a strange world it is. Heavily fortified with thousands of U.S. troops and miles of 12-foot-high concrete walls, the four square miles of the Green Zone can be terribly insular, especially compared with the violence and disorder that grip the rest of Baghdad. In fact, the Green Zone bubble reminded me some of the Notre Dame bubble—peculiar male/female relations (men outnumber women here at least 20:1), a fair bit of drinking (mostly at underground bars) and an opportunity to attend daily Mass (complete with pistol-packing Eucharistic ministers).

Living accommodations were spartan compared to home but luxurious compared to life for soldiers out in the field. The Green Zone is practically immune from the roadside bombs and sniper fire that have claimed the lives of so many U.S. troops. The greatest danger for those posted at the U.S. Embassy is indirect fire in the form of rockets and mortars, which hit the compound with some regularity. I encountered a less common, but more interesting, peril one night when the night sky in Baghdad lit up with tracer bullets following the Iraqi soccer team’s win over Syria. For more than 30 minutes, AK-47 rounds rained down on the Embassy, forcing people to scurry from their thin-roofed trailers towards the bunkers. Those who were unaware of the soccer match were convinced at first that this celebratory fire represented a full frontal assault on the Green Zone.

These occasional dangers belie the general security and comfort of the Green Zone, often called “the world’s largest gated community.” Hundreds of trailers are spread across the grounds of Saddam’s former presidential palace, making the longest commute no more than a five-minute walk. The trailers are not large, and my first six months were spent sleeping just a few feet away from a hard-snoring 55-year-old Jordanian interpreter before being upgraded to my own place. We enjoyed such fine amenities as a top-notch cafeteria serving four meals a day, a palace pool, laundry services and a 24-hour gym. Basically, all the hassles that make up everyday life in the States are removed so that people can concentrate on their work.

And work we did. Immediately upon arrival I was assigned to work on the Dujayl case, which was gearing up for trial. It was at least six weeks before I had a day off, and the usual workday ran from 9 a.m. to 9 p.m. Working closely with the RCLO attorneys advising both the judges and prosecutors for the Dujayl trial, I quickly established a rapport with our Iraqi colleagues and became one of just a handful of Americans familiar with all the key players and evidence in the Dujayl trial. I began actively participating in policy meetings on matters as diverse as whether opening statements would be heard in the trial (they were) to whether Iraqi guards would have weapons in the courtroom (they did not). RCLO members worked feverishly to prepare for all the logistics that come with setting up a major war crimes trial—securing the courthouse, coordinating media production and coverage, arranging for transportation of witnesses—while the IHT occupied itself with the legal problems that would arise in the courtroom.

Problems did indeed arise. Three defense attorneys were murdered over the course of the trial, prompting several boycotts by the remaining defense attorneys and hunger strikes by the defendants. Saddam and his co-defendants often tried to hijack the proceedings in order to deliver political speeches, which gave the impression that the court was in complete chaos. Closer to the action, the scene was much different. The 10-second clip of Saddam ranting in court that made it on the U.S. nightly news often overshadowed hours of gripping testimony by witnesses describing the atrocities committed by the former regime. While the trial was certainly imperfect, great efforts were made to ensure that it was fair. For whatever its flaws, the Dujayl trial was an enormous accomplishment for the Iraqi judicial system. Prior to Dujayl the longest criminal trial in the history of Iraq lasted two days.

Many days I longed for a swift end to the trial. Numerous unforeseen delays bogged the trial down and kept me in Iraq well beyond my original six-month commitment. During that time the situation was steadily deteriorating in Iraq, with sectarian violence taking hold and spiraling out of control. Many of our objectives in terms of establishing the rule of law and bringing closure to Saddam’s reign of terror were overcome by the increasing instability throughout the country. Though Iraqis continued to tune in—work would come to a standstill on trial days—there was a growing sense that the fate of Saddam was insignificant compared to the violence and lawlessness gripping the country.

The verdict and aftermath
Yet, having invested so much of my time and energy in the process, I decided to remain in Iraq until a verdict was delivered in the Dujayl case. So with a front-row seat on November 5, 2006, I watched with great interest, but no great surprise, as Saddam was found guilty and sentenced to death by hanging. With this personal milestone reached, I departed Baghdad two days later.

Just eight weeks later Saddam was no more. I had mixed reactions as I watched the news coverage surrounding the execution from a hotel room in Delhi. (I spent a month in India as part of my Iraq decompression program.) Knowing firsthand the political pressure in Iraq for a swift execution, I was not surprised by how quickly it came after the rejection of Saddam’s appeal. Along with the rest of the world, I was appalled at the images of Shia witnesses and guards who taunted Saddam moments before his hanging. This sort of behavior had always been feared by American officials involved with the trial, but U.S. influence decreased dramatically after relinquishing physical custody of Saddam to the Iraqis. The whole episode served to engender widespread sympathy for Saddam throughout the Islamic world, effectively sealing his wish to be seen as a martyr.

As for me, my lasting image of the trial process will remain the day when the first witness testified against Saddam. For an Iraqi citizen to confront his former dictator from a distance of 10 feet crystallized in my mind the essential purpose of the trial: subjecting a tyrant to the rule of law. The Iraqi people deserved these moments, and it is my sincere hope that there will come a day when a peaceful Iraq emerges from its troubling past and precarious present.

Evan Maher is currently living in Buenos Aires, Argentina, polishing his Spanish. He plans to pursue a master’s degree in international relations beginning this fall. He may be reached at evanmaher@gmail.com:mailtoevanmaher@gmail.com.