It was 50 degrees in South Bend on Valentine’s Day, but the weather was pretty much the only thing heating up on campus.

Besides the people playing catch, lounging in hammocks and break dancing on North Quad, the day was just like any other in February. Even after volunteering to report on Valentine’s Day interactions around campus, I was still surprised by my professor’s choice of Feb. 14 attire: a navy and white striped T-shirt adorned with red lip prints. Only after she put economics-themed Valentines on the projector (along the lines of: “I don’t think you’re great, I think you’re fantastic. For what you’re supplying, my demand’s inelastic.”) did I remember the holiday. 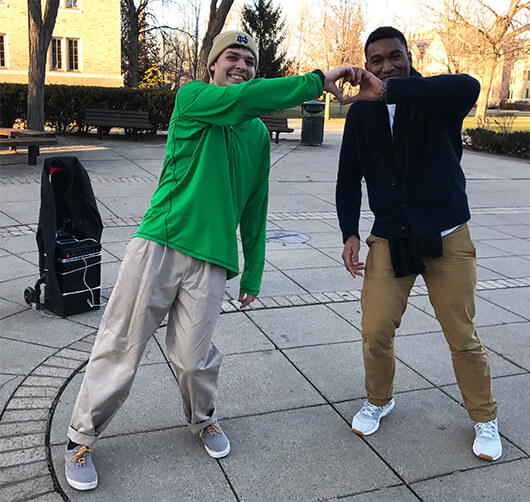 Dressing up in pink or red for the day was popular among my professors, but in my marketing class only one student was sporting the holiday colors. She also gushed about her boyfriend from home, who had surprised her with a visit, while a girl on my right, dressed in a gray sweatshirt, muttered that all her boyfriend had surprised her with was the medium cup of Einstein Bros. coffee she was holding.

I overheard a telling conversation between classes in DeBart: “I always wear black on Valentine’s Day. I hate this holiday,” one girl said. Her friend responded that her roommate had woken up and put on a red shirt, but had changed into something more neutral when she realized what day it was.

It seems as if this ambivalence — or even hatred — toward Valentine’s Day could stem from the logistics of college: Many students study abroad during the spring semester and miss out on celebrating with their significant others. Others date people who go to school somewhere else. Of course, many students don’t date at all.

A lot of us associate the holiday with other kinds of relationships. My Instagram feed was filled with pictures of people showing love to their families (pets included) and having fun with friends at Galentine’s Day celebrations on Feb. 13, a holiday popularized by Leslie Knope, Amy Poehler’s character in the series Parks and Recreation. One friend even posted a screenshot of a text message with her dad: “Will you send me flowers for Valentine’s Day? I don’t have a valentine” to which her dad had disappointingly not yet responded.

Knope defined Galentine’s Day as “Ladies celebrating ladies. It’s like Lilith Fair, minus the angst. Plus frittatas." My friends marked the day by gathering to watch The Bachelor.

On my walk over to Welsh Family Hall for the show, I passed a girl carrying a trashcan full of roses. Was she also walking to a party for The Bachelor? Roses are central to the show’s “plot.” Or was this the aftermath of a poorly timed breakup? A Feb. 13 breakup could be considered well-timed for Club Fever, a student favorite on Thursday nights — the nightclub offers free cover during Valentine’s week if you show up with a picture of an ex.

Perhaps my favorite spotting on-campus this Valentine’s Day was the two breakdancers who were enjoying the sunny weather outside of LaFortune Student Center. Fifth-year student AJ Crosley and freshman Gabriel Brown performed a Valentine’s-themed dance on the spot when I walked over to ask them their holiday plans.

The student group Mariachi ND charged for its Valentine’s serenades: “Order a live mariachi band . . . to win your special someone’s hand” was their tagline. I thought maybe AJ and Gabriel could monetize campus emotions with BreakUpDances performed throughout the week: “Breaking it up by breaking it down.” This could prove exceptionally successful if staged outside of South Dining Hall during Valentine’s dinner.

The apparent disassociation students are experiencing with Valentine’s Day has not yet been noted by campus dining: South Dining Hall was decorated for the holiday, complete with dimmed lighting, love songs and an array of desserts. But if your date takes you to the dining hall for dinner on Valentine’s Day, chances are you’ll be wearing black next Feb. 14.

Erin McAuliffe, a marketing and journalism student from Cincinnati, Ohio, is this magazine’s intern for the spring 2017 semester. As a sophomore, she appeared on Notre Dame’s version of The Bachelor — The Irish Bachelor — but was eliminated by the end of the first episode for being “too fun.”