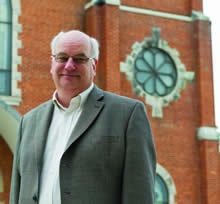 It takes the sound of a spoon bouncing off the restaurant table top before Gus Zuehlke realizes he has been pounding his fist into the laminate.

“Well,” he says, a bit embarrassed, “I guess you can tell I’m pretty passionate about this.”

This is Uganda, the central African country Zuehlke ’80 knew little about until he met Father Robert Binta, the chaplain for the Catholic members of Uganda’s Parliament, who was studying at Notre Dame in 2002 as part of an exchange program. Binta spent much of his off-campus time at Saint Bavo Catholic Church in Mishawaka, Indiana, where Zuehlke has served as a catechist for more than 20 years.

“I remember walking into my office one day, and he was just sitting in front of my computer, weeping,” Zuehlke says. “He had found a story on the Internet about a woman and her baby who had been caught by rebels outside of a displacement camp. They were hacked to death with machetes.”

It was there that Binta told Zuehlke about the two-decades-old war between the Lord’s Resistance Army, the rebel militia that kidnapped young children to become forced soldiers or sex slaves, and the Ugandan government, which attempted to protect its citizens by moving more than 2 million people off their land and into IDPs, or Internally Displaced Persons camps.

“We wiped tears from our eyes, and we sat and prayed that day,” Zuehlke says, “but . . . I certainly had no idea where this would lead me.”

When Father Binta returned to Zuehlke’s office a year later, he came with a proposition. He wanted Zuehlke to lead the Catholic members of the Ugandan Parliament in an Advent retreat.

“I didn’t think it was very practical,” says Zuehlke, who nonetheless felt compelled to go. And once he made up his mind, and received enough donations for the plane ticket, he knew he had to learn more about the suffering of Uganda’s war-torn north.

“My experience of suffering was quite limited,” Zuehlke says, adding, “So I insisted we go to Gulu, and the first site I saw was the camp. I had seen poverty before, but not the effects of poverty and war working together.”

Zuehlke was struck by the unsanitary conditions, the isolation, and the stories of loss and survival. He also was awe-struck at the people of faith there. He met and befriended Gulu’s archbishop, John Baptist Odama, who would become a critical figure in negotiating a truce in July 2006, and he visited the scores of commuter children who left their villages each night to sleep in the city shelter so they wouldn’t be abducted or killed by the rebels.

“Everyone kept asking me what I was doing there, and in some ways I didn’t even know,” Zuehlke says of his 2003 visit, adding, “but I had to see this before I gave my retreat.”

When Zuehlke did speak to parliament, he gave the retreat he had intended before visiting Gulu. What the members of parliament noticed, however, was that he was willing to visit Gulu at all.

Zuehlke next saw Archbishop Odama on the Notre Dame campus at a 2004 meeting for Catholic Relief Services at the Kroc Institute for International Peace Studies. The archbishop, says Zuehlke, told him that, as a result of the retreat he gave to parliament, ‘“The government paid a lot more attention to us in Gulu, and things are getting better.’”

Zuehlke says he soon began thinking about a way to connect the camps, which he visited again and again. No land-line phones existed in that part of Uganda, and cell phone capability was spotty at best.

He enlisted Ted Pethick, the head of Navitor Computer Systems of Indiana, and Jerry Vickers, the information technology manager for the Dowagiac, Michigan-based Wolverine Mutual Insurance Co., to help devise a system that required little power, could be linked by satellite, and would use portable computers with digital camcorders and Internet phones.

And so the technology-based nonprofit BOSCO — Battery Operated Systems of Community Outreach — was born.

BOSCO teamed with Mark Summer, co-founder of Inveneo, who developed the solar-powered system that would become essential to the project’s 2007 launch, since no power grid exists in northern Uganda. Over the past four years, BOSCO has installed solar panels for power, and satellite antennas for high-speed wireless Internet to create a rural computer network that connects Catholic churches, clinics and schools in northern Uganda with each other and the rest of the world. The network, which is used for everything from teacher training to communicating with potential donors, started with six displacement camps and has since expanded to 22 locations and counting.

In addition to a volunteer board in South Bend, the company now has a staff on the ground in Uganda. Notre Dame funds an internship program where a student works with BOSCO-Uganda over a period of 10 weeks.

The project serves more than 100,000 people, has been embraced by the Ugandan government and credited by the international community for improving education, economics, human rights documentation, health care and rural development in the communities it serves. Last year it was awarded the Breaking Borders prize sponsored by Google and Global Voices, which honors “outstanding web projects initiated by individuals or groups that demonstrate courage, energy and resourcefulness in using the Internet to promote freedom of expression.”

“People have asked me, ‘Why computers? Why not food or clean water instead?’” Zuehlke says. “That can change one thing, but this, this can change everything.”