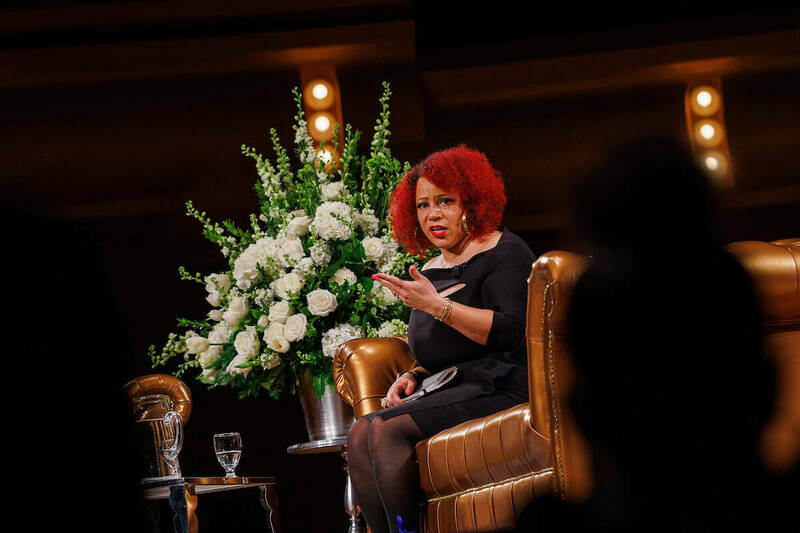 “If the work didn’t matter, if it wasn’t unsettling power, I would’ve failed.” Photography by Peter Ringenberg

Nikole Hannah-Jones ’98 says she became a reporter because she understood the power of journalism.

“I wanted to be an investigative reporter. I got into journalism to do substantial reporting and accountability reporting, but I didn't see anyone who looked like me doing this reporting,” the famed journalist and author told an audience Tuesday, March 15, at Notre Dame.

Hannah-Jones won the 2020 Pulitzer Prize for Commentary for The 1619 Project, a New York Times interactive series focused on the 400th anniversary of when enslaved Africans were first brought to what would become the United States. It was expanded and published as a book, The 1619 Project: A New Origin Story, in 2021.

“Journalism is a profoundly important profession in a free society, in a democratic society. And yet, we are at a very pivotal moment. We have record low numbers (regarding) trust in journalism as an institution,” she told the audience in Leighton Concert Hall in the DeBartolo Performing Arts Center.

“My biggest fear about journalism is that we (Americans) are totally ill-equipped for the danger that our democracy is in right now,” she said. “We have a class of political reporters who really think that this is about a horse race. Who have been indoctrinated into this belief that fairness means treating both sides equally — even if both sides are not behaving in the same way. And who — because our political reporting class tends to come from upper class families, tends be white, tends to be male — they actually believe that our democracy will hold.”

The event took the form of a conversation with Mark A. Sanders, a professor of English and Africana studies and director of the Notre Dame Initiative on Race and Resilience.

Hannah-Jones reflected on public reaction to The 1619 Project, how experiences at Notre Dame influenced her career and the need for journalists who more accurately represent the growing diversity of the United States.

She graduated from Notre Dame with a bachelor’s degree in history and Africana studies. She said this was her first visit back to campus in 20 years.

Since its publication, The 1619 Project has drawn enormous public reaction, both positive and critical, from historians, political commentators and the general public. In some states, legislators or school boards have taken steps to ban the book from schools or stop educators from teaching lessons related to its contents.

“If the work didn’t matter, if it wasn’t unsettling power, I would’ve failed. Because you don’t get into journalism to make powerful people comfortable,” Hannah-Jones said.

History is not just a record of what happened, the journalist said. “History is interpretation, and human beings are doing the interpreting,” she said.

Her journalism career focuses on investigating racial inequality and injustice. In addition to the Pulitzer, her reporting has earned her the MacArthur Fellowship, a Peabody Award, two George Polk Awards and three National Magazine Awards.

Hannah-Jones described herself as a “very, very nerdy child” growing up and attending public school in Waterloo, Iowa. Her father subscribed to two newspapers, which she grew up reading. She said reporting on Black people in those days was mostly limited to news about crime.

Sanders asked Hannah-Jones how her Notre Dame undergraduate experience helped or failed her in preparing for her journalism career.

Hannah-Jones described a pivotal incident during her college days, one she has recounted before. She said she and a female friend were returning to campus one evening and their car broke down. They were trying to push the vehicle, when another car carrying several white Notre Dame football players drove by and someone from that vehicle yelled to “get out of the road, you n - - - - - -.”

Hannah-Jones said she had never up to that point in her life been called the N-word.

As a Black girl from a working-class family, Hannah-Jones said, she chose to apply to a selective school like Notre Dame because she felt she needed to have a certain credential to succeed. “I knew that it wouldn’t matter how smart I might be, how hard I might work. If I could have this credential, it would signify to certain people that I was worth it,” she said.

She said she didn’t always feel welcomed as an equal on campus. During freshman year, she stopped going to classes for a while, and received several F grades on a report card. At one point, an academic dean encouraged her to withdraw from school, but never asked her what was wrong or how the University could help, she said. She stayed in school and graduated on time.

“What this place taught me was resiliency,” Hannah-Jones said. “That there would never be a point where I wasn’t going to have to prove myself. And that I was going to always use people’s low expectations of me to prove them wrong.”

In June 2020 — in the aftermath of the death of George Floyd, a Black man, at the hands of a Minneapolis police officer, and amid protests across the nation against police brutality and racism — Hannah-Jones wrote an essay, “What is Owed,” making the argument for financial reparations for Black Americans who can trace an ancestor back to American slavery.

“I really wanted white readers to question why they have such a visceral negative reaction to the idea of reparations,” she said.

In addition to her role as a staff writer for the New York Times Magazine, Hannah-Jones is the inaugural Knight Chair in Race and Journalism at Howard University, where she founded the Center for Journalism and Democracy. In 2015, she was a co-founder of the Ida B. Wells Society for Investigative Reporting.

Her talk was the Gallivan Program in Journalism, Ethics, and Democracy’s 2022 Red Smith Lecture. It also served as the Initiative on Race and Resilience’s inaugural Sojourner Truth Lecture and part of the University’s Sister Kathleen Cannon, O.P, Distinguished Lecture series.

Last weekend, Hannah-Jones posted on Twitter about her approaching trip to Notre Dame. She included this: “TRUE STORY: I owed ND $ when I graduated so have never received my diploma.”

During her visit, she was presented with her Notre Dame diploma.

After her talk, she posted a photo of the diploma on Twitter, with the message: “What a homecoming tonight. After 24 years, I finally have my diploma. I was more emotional about it than I thought. Thank you, @Notre Dame.”

Margaret Fosmoe is an associate editor of this magazine. mfosmoe@nd.edu