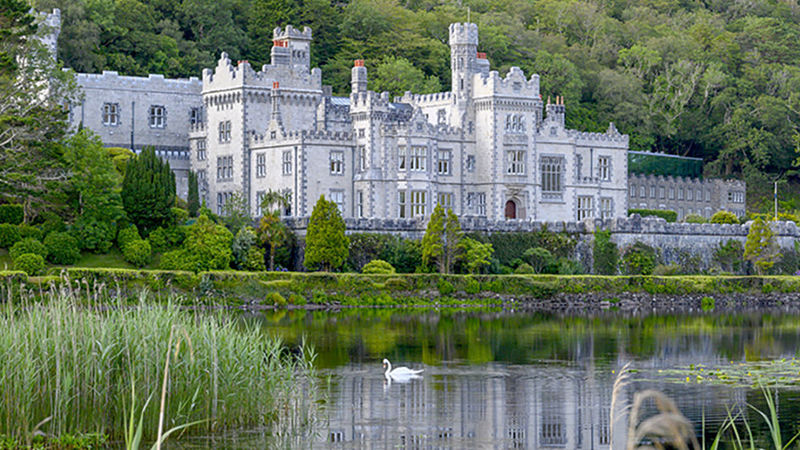 In the wilds of western Ireland, Sister Máire Hickey, OSB, walks. Most every day. In her long, black habit. Through the dormant farmland of Kylemore Abbey. Though she sticks to the gravel pathways, the 82-year-old Benedictine nun is sometimes spattered by rain or whipped by the Atlantic winds — strong enough to knock a person to the ground.

“I just look around to see what can I hold on to until the wind has passed,” she says with a chuckle. “Not much more I can do.”

Mother Máire, as she is known, is the abbess of Kylemore, a monastic community that for 100 years has tended acres of glacial valley, mountains and lakes in the Connemara coastal region north and west of Galway. The grounds are anchored by a breathtaking neo-Gothic castle so much a symbol of Ireland that it appears as the watermark on the country’s passport pages.

“It’s a fairytale landscape,” says Michael Gibbons, a local archeologist who knows every burial site and bog of Kylemore and Connemara. “You turn a corner and suddenly you’ve got this magical Victorian palace overlooking the lake. It literally stops traffic dead in the road.”

Walking is part of Mother Máire’s contemplative life, a way of prayer and considering the importance of God’s gift of nature. But with the onset of the global coronavirus pandemic, she started to see something deeper in her spectacular surroundings, even after 46 years in the order and 12 as leader of Kylemore. With the first lockdown last spring, there was no travel, no meeting with visitors, no going to her office. The centennial celebratory events all had to be canceled. Instead Mother Máire sat inside the old farmhouse that serves as the temporary home for the nuns while they build a new monastery. She stared out the window at the Connemara ponies, a special Irish breed of show horses grazing in the fields, studying them, their breakfast routine, how they parented their foals, and she began to feel part of them. On her walks, she took extra time along the stream, focusing on a leaf or watching the birds.

“This feeling of being connected,” she says, “that’s part of what people have been writing about in ecology and environment in this past year, the connectedness of everything in nature. And I really got to feel it in a new way.”

From the winds to the tiny insects, the message of the pandemic crystalized in her head: COVID-19 was forcing everyone to take a hard look at how we treat nature and each other. The antidote was to quarantine, to pull back from one another. In that vacuum, nature emerged. In Connemara alone, salmon returned to the rivers, pine martens roamed back porches and people noticed the trilling of birds. They were always there, but no one could hear them over the noise of shops and pubs.

That message gave deeper urgency to Mother Máire’s vision of Kylemore for the abbey’s next 100 years, which was already taking its inspiration from Laudato Si’, Pope Francis’ 2015 encyclical on caring for the planet. The plan for Kylemore, the castle-turned-abbey and one-time girls’ school, was to make one of the most beautiful corners of God’s Earth a place where people could connect spiritually with their surroundings, and understand how conservation and sustainability are rooted in faith — the wellsprings of contemplative ecology.

“I just was becoming more and more aware that we were treating nature terribly badly, that we were damaging God’s creation, and that damages our relationship with him,” she says.

Her thoughts fit well with Kylemore’s partnership with Notre Dame, which opened a global center there in 2016, renovating a building in the old monastery that originally housed the manor’s Turkish baths. Lisa Caulfield, academic director of the center, says contemplative ecology makes sense for the University’s interests, too.

“Our undergraduates have anxiety towards the issues of climate change and how they will deal with it,” she says. “We can use Kylemore as a case study in environmental impact” — especially of commerce and travel.

Mother Máire was first exposed to the formal concept of contemplative ecology by reading The Blue Sapphire of the Mind by Douglas Christie, a Loyola Marymount University theology professor who advocates the exploration of monastic traditions to connect with and conserve nature.

“Douglas believes that a motivation that comes out of a deep realization that nature is God’s handiwork and his gift,” she says, “is what will give human beings a really deep motivation to act and to work for change.”

She asked Caulfield to invite Christie to Kylemore, where he’ll play a central role in an upcoming conference. But for Mother Máire, the mission of environmental renewal has been a long time in the making, starting with her community’s centuries-old story of hardship and continuing with the moment she entered the Benedictine house in Dinklage, West Germany, in 1974. The nuns had moved there from East Germany after enduring hunger and malnutrition during World War II. Their history left them with a sense of conservation as survival, and they created what was then known as a biological garden, growing their own food without pesticides.

“I spent my first three years there working in the organic vegetable garden,” Mother Máire says. “And I got to understand a lot about nature and organic and the damage we can do with chemicals and fertilizers.”

In 1983, the ecumenical World Council of Churches launched a movement for all Christians to work together on “global peace, justice and conservation of creation,” she says. She was part of the delegation representing German religious women in meetings around the continent for years afterward. She not only learned how ecology and conservation relate to peace and justice, but was also introduced to the idea of sustainability long before it became an international catchword.

Mother Máire arrived in Kylemore in 2008 after 34 years in Dinklage — 23 as abbess — to join the Irish community of Benedictine nuns. The house was established in exile in Ypres, Belgium, in 1665, when Catholics were banned from England and Ireland. Over the centuries, they endured wars and religious persecution. A short-lived return to Dublin ended when they were driven out again by Protestant rule. Finally, the nuns were forced to flee Belgium during World War I, when bombing destroyed their abbey.

They settled at Kylemore Castle, built in the late 1800s by Mitchell Henry, an Englishman of Irish descent, for his beloved wife, Margaret, whose crypt is still on the property. (Later it became the home of the Duke and Duchess of Manchester.) Though Henry was a benevolent landlord, such manors were despised as British attempts to tame not only the Irish landscape, but the people as well. If the nuns hadn’t bought the estate in 1920, in the midst of political turmoil and on the eve      of the Irish Civil War, it may have been destroyed.

“Those houses represented British imperialism,” Michael Gibbons says. The attitude was “they should be taken down and thrown into a bog.”

In keeping with their educational mission, the nuns established an international girls’ school at Kylemore Abbey. But when Mother Máire arrived, the community was once again in flux. The girls’ school was about to close due to dwindling enrollment. The upkeep of the property had become too expensive, and Kylemore had fallen into disrepair. The nuns wondered if their time there was coming to an end.

Mother Máire led a revival. With a doctorate in classics from the University of Cambridge, she had been an influencer in Benedictine circles for decades. She spoke, wrote and led retreats on spirituality and monastic life and became an adviser to monastic communities all over the western world. She knew how to be creative.

Before her arrival, Kylemore was already turning into a tourist destination with the castle, lakes and walled Victorian garden that can take hours to roam. After the girls’ school closed in 2010, the nuns shifted their focus toward so-called monastic hospitality, offering a haven for contemplative experience. Mother Máire found a way to use her passion for saving the planet within the tenets of her vocation, helping Kylemore become a place “lovingly stewarded as a sacrament of God in keeping with the spirit of the Rule of St. Benedict,” as she puts it.

She also helped to forge the relationship with Notre Dame, which was looking for a home in western Ireland to give its students a different experience from Dublin. Kylemore, which means “big woodland,” was the perfect place for this vision. Gibbons calls it a miniature continent, with a fjord to the north, mountain after mountain to the south and the Atlantic Ocean to the west. But he cautions visitors not to be fooled by its wilderness.

“The hand of man is all over the place,” he says. “Kylemore valley has witnessed episodic bouts of settlement, burial and ritual over the last 6,000 years. The evidence is still visible . . . across the valley from the abbey.” That includes Neolithic tombs, monastic graveyards from the fifth or sixth centuries and pre-famine ruins of farmhouses and potato fields.

Today Kylemore has another human problem. The abbey is a victim of its own success, having become one of Ireland’s most visited sites outside of Dublin and drawing more than 500,000 people each year. Most come from abroad. Tourism has created scores of jobs in a region that offers few other opportunities, and it supports the nuns’ operations, including construction of the new monastery. But it also impacts water, the sewer system and traffic.

“They cannot just continue to expand the commercial level without threatening the essence of what they’ve got,” Gibbons says. “A stunning natural landscape threatened by its very beauty.”

He notes other potential problems, such as plans to add trails to Connemara National Park next door, which could endanger rare, protected bog land and archaeological monuments.

This is where Kylemore’s ecological challenge lies. Mother Máire, Lisa Caulfield and Kylemore’s executive director, Conor Coyne, are working to incorporate the pope’s encyclical and the United Nations’ Sustainable Development Goals into their business plan. Notre Dame is looking at how it might use its facilities at Kylemore to develop undergraduate programs on sustainability and the ethical treatment of landscape. Already students have worked on projects eliminating rhododendron, an invasive plant species. Future collaborations with faculty from the National University of Ireland Galway may incorporate theology, economics, science and engineering, including a program that connects food with faith.

It’s mostly preliminary at this point, as the pandemic pushed many plans into 2021 and beyond. The community went into a second lockdown in the fall.

Undaunted, Mother Máire looks forward to hosting contemplative ecology retreats where people might feel what she feels at Kylemore: the spirituality of nature.

“I would love it if people would come to Kylemore and . . . get some idea of all this,” she says. “And each one grows a little more in their awareness of the beauty of the world and the beauty of God, and our responsibility to take care of that creation.”