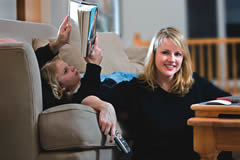 Paige Wiser ’92 is dressed and ready for work. In a comfortable-looking striped, button-down shirt and black pants, a dinner beside her, she nestles in, her 6-year-old daughter, Audrey, on the couch nearby and 5-year-old son, Jack, lying on a mattress in the room. She’ll at times need to shut out all distractions for her work assignment, which is to critique the reality show The Bachelorette.

She takes in the nuances of which of her few remaining suitors Ali from San Francisco might choose. There will be Ali in poses, Ali whisked off to an island destination. There will be drama. Wiser hangs on the show’s every word, sporadically rolling her eyes and laughing at the absurdity of it all. But she loves it. Her son or daughter will occasionally ask a question, confused by the romance blossoming.

Wiser types away among a Buzz Lightyear action figure, a toy guitar, splayed dolls and light wood TV trays. She is expected this evening to post her show reactions on the Internet for instant reader gratification. She is also expected to look over when her son makes a funny face. She will do both.

But before the show begins, and despite sitting on some gum left on the chair by one of her kids, she takes time to reflect on some questions, to figure out how she even got into this. Wiser was once the girl about town for the Chicago Sun-Times, the one who partied and told you where to party. She’s still at the same paper, but now her office can be the family room — and turning the TV on sometimes signifies her day starting, not ending.

“One thing I knew is that I always wanted to write,” she says, subtly adjusting her glasses. “I literally have journals from second grade.” She did, however, have a challenge to her television upbringing. “We did not have cable,” she confesses. “That’s the TV version of underprivileged. We didn’t have a library in town, so I would read the same books over and over — that prepared me for reruns.”

While attending graduate school at Northwestern University, she began an internship at the Sun-Times — “paid well, very rare!” — and became a copy editor in 1992. Her toiling at syntax ultimately led to a reporter position and later a column called “Planet Paige” — a look at nightlife or whatever she found interesting in the moment. When the TV critic position opened up, she was thrilled to try out for it. She wasn’t quite as thrilled when she didn’t get it. The second time it opened she didn’t want to bother and, of course, the second time it was hers. “That was an unbelievable day,” she says, “I talk about TV all the time anyway.”

But where that romance started may actually have been from her occasional lack of one. “I think it was when I was the single girl in Chicago,” she says. “You’d get home and there would be no one there. TV became my company.” She certainly isn’t lacking for company now as her son vies for attention and wonders who the note-taking guest might be.

Her husband, a producer for local WGN Radio, peeks in once in a while. I ask his view about Wiser taking over her gig. “Not many people get to live their dream,” he says. “What’s funny is we don’t watch TV together anymore. She spends so much time watching that we try to find other things to do. It’s kind of nice.”

What’s also nice, in this day of downsizing newspapers, is that Wiser still has a job. "I try to focus on the positive of getting to do something I enjoy, but I also understand that the business is changing,” she says. “I think a key to newspapers continuing to be successful is to get involved with your readers in the way they like. You post about a show right away, give them something immediate. We have to embrace technology.”

An oddity of her position is the parenting dilemma that comes with it. How many times are children told to turn off the TV and go outside and play, that this contraption will dumb them down? Wiser can’t say that, since the “idiot box” is now in essence a family cash register, contributing to the roof that’s over their heads.

It actually is a beautiful evening, hints of sun, still warm, framed all the more by the pervading glass of the family room of Wiser’s house, skylights and all. In fact, all of us should probably be outside throwing a Frisbee. And we would be, except that Ali has to find love and we can’t, as responsible Americans, miss out on her experience.

“Yeah,” Wiser says, “how exactly can I punish them from watching TV?”

As this thought settles, Wiser suddenly grows more animated. “Ooh,” she says, “the show’s starting!” Sitting Indian style, her pink laptop at the ready, Wiser clutches the remote control like it might just have all the answers. She’s particularly interested in what Frank will reveal — he’s the suitor with a secret. “Why he’s waited to take her off to paradise to tell her this big revelation, I have no idea,” she says with a laugh.

“Now I’m not going to tell you that I see it as a complete evolution either,” she says. “There’s a lot of bad reality out there, and scripted shows can be great. . . . But I can’t say that I don’t enjoy watching regular people make a fool of themselves. They do things you’d never imagine doing. A camera on you is like being drunk. People might not do it if they were sober, but it’s still them doing it. You have to watch with your eyes closed in horror sometimes.”

Horror, in fact, is actually her favorite kind of scripted these days. “Dexter had me right from the start,” she says. “He’s a serial killer, but he only kills bad people. He’s messed up, yet he tries to get married and have a child. You wouldn’t think it could pull you in, but it does.”

Describing her critical style, Wiser says, “I’m not trying to give this snobby analysis.” She quietly thinks a bit before her voice slowly rises in declaration. “I’m more of a regular person with a regular approach — I’m a fan of TV. . . . I love TV! Every show I want to like!”

Her face slowly crinkles into a smile as Frank reveals that his feelings for Ali have reminded him that he actually, of all things, loves his ex-girlfriend. Wiser rolls her eyes, already privy to information that his ex may never have been ex to begin with.

Frank tries to soften the blow, “I gave up everything to be here, too.”

“Apparently not everything,” Ali says.

Wiser pumps her fist in the air at this winning retort. Her son has long disappeared, replaced by a slightly floating mattress with feet. “Mommy,” Jack says, “can you see me under here?” Wiser beams. How many lawyers could hear that loving question in the midst of litigation? How many surgeons as they call for a scalpel?

As commercials play, Wiser turns and pulls at her shirt. “You know, I’m just not taking care of myself with this job,” she says. “I’ve been sitting behind a TV for a year. I have a cycle, a treadmill, we have DVRs and DVD players. There’s all kinds of ways I could be exercising, but it’s not happening.”

The format of The Bachelorette means Ali must eliminate someone at the end of each show, but tonight is an exception. By Frank recusing himself from the competition, she will allow the two remaining to move on. And it truly bears out that these are people just like us. Frank is a retail manager — or was, depending on where his 15 minutes take him — who lives less than an hour away from where we’re watching right now.

Though Wiser admits to the show’s periodic lameness, she’s clearly pleased overall with the last two hours of entertainment, enjoying the fact that the woman on the show is the one firmly in control. “It’s better to have more to choose from, Audrey,” Wiser offers up as a lesson to her 6-year-old daughter. Audrey nods, somewhat getting it. “So,” Audrey figures, “she’s down to two husbands?”

Wiser just shakes her head and thinks of a way to explain, all while a mattress starts to hover again in the background.

Eric Butterman has previously profiled Regis Philbin and Anne Heaton for this publication. Contact him at ericbutterman@yahoo.com.