It was the worst of times.

November 2016. I’d just turned 73 and my life was in free fall financially, emotionally and, as I would later realize, spiritually. Divorced and childless, I’d just moved again, this time into a “garden” apartment, a studio more basement than garden. 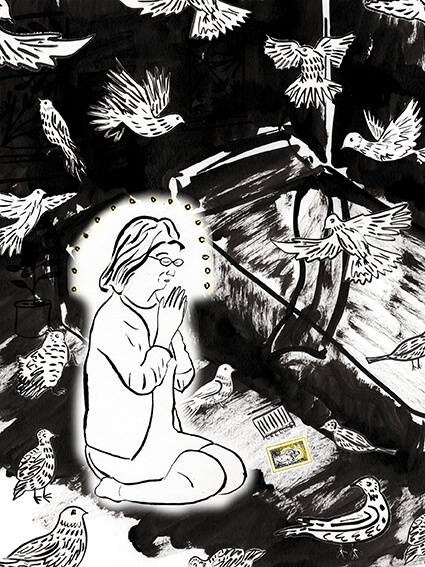 Increasing my slow-burn claustrophobia was the opaque plastic film that covered the five small windows ringing the room. A bit of light, but nothing more, could penetrate.

There was something aptly metaphorical about that basement: I felt no more at home in it than I was feeling in my life. A sense of purpose and meaning eluded me, and for the first time in my life, I couldn’t imagine where I was headed.

I wanted to remarry, but was hopelessly out of relationship practice. I wanted to live in a comfortable place, but was increasingly unable to afford it. And I wanted to re-examine my 30-year career as a writer and teacher, but didn’t even know what that meant.

And so, the free fall.

The weight of it all made me anxious and depressed, my mind chewing like some ferret on the ankle of my growing angst. Worst was the nightly tossing and turning and waking at 4 a.m., the ferret firmly in place. All of the things that had once calmed me at times like these — meditation, walking, self-help books, journal-writing, good friends — offered little to no comfort.

One night I remembered something I’d heard years ago, advice from the psychiatrist Karl Menninger: If you find yourself unraveling mentally, go out and find someone who needs your help. Of course, Menninger was not the first or only one to recognize that helping others is a way of helping oneself. Or that in giving, we receive.

For despite having been a lapsed Catholic for more than 40 years, this all sounded pretty familiar.

Before my Lutheran mother converted to my father’s Catholic faith, not long before she died at 50, she’d been drawn to one of the most popular and beloved Catholic saints, Francis of Assisi. Until recently — before reading a review in U.S. Catholic of Patricia Appelbaum’s  St. Francis of America: How a Thirteenth-Century Friar Became America’s Most Popular Saint — I couldn’t imagine how she knew about him. I’d always thought that saints as really holy human beings was purely a Catholic thing.

But the reviewer, Kathleen Manning, wrote that, in the United States, “the popularization of this Catholic saint . . . owes a heavy debt to mainline American Protestantism.”

And while I don’t know if my mother ever moved beyond her admiration to pray to St. Francis, she did have in her possession when she died a holy card. On one side, the saint stands firmly surrounded by flocking birds. On the other is the prayer for peace erroneously attributed to him.

For years, including many of my long-lapsed ones, I carried that card in my wallet, not even sure why. It’s pretty tattered and was likely so when it was handed down to me, or found by me, after my mother died.

So it came to pass that one night during my Basement Bottom-Out — trying yet again to fall and stay asleep — I whisked Francis’ card out of my wallet and, on my knees, began to recite the prayer, out loud and with as much vigor as I could muster:

Lord, make me an instrument of Your peace.

Where there is hatred, let me sow love;

where there is injury, pardon;

where there is doubt, faith;

where there is despair, hope;

where there is darkness, light;

and where there is sadness, joy.

O Divine Master, grant that I may not so much seek

to be consoled as to console;

to be understood as to understand;

to be loved as to love;

for it is in giving that we receive;

it is in pardoning that we are pardoned;

and it is in dying that we are born to eternal life.

Over the next several weeks, I edited the prayer to make it sound more like me. First, “O Divine Master” became “Oh Most Compassionate Creator.” Then, because I have difficulty imagining an eternal life, I changed the last sentence to read: “And it is in being gathered by the Holy Spirit into communities where we can be held and hold others.” Not sure what I had in mind by “communities,” though I hoped for places where I could both give and receive consolation, understanding, even love.

Especially during the worst of times.

I no longer live in that basement, having moved in with a friend eight months ago. She owns a house in my former neighborhood on the far north side of Chicago. It’s a temporary arrangement as I look for a nearby above-ground apartment. In hindsight, I probably should never have left the area: It was before and may be again one of my Holy Spirit communities, including the 100-member block club that I helped build when I first lived there, my favorite Mexican market and bakery and the local bar where I go to watch the Cubs and visit with the regulars.

Another place where the Spirit resides — in a more obvious way — is a church just up the street. I started going there the day after I moved in with my friend, and, not long after, became a parishioner, surprising everyone I know, including me.

Then, not so surprisingly, I joined the choir — a rousing, toe-tapping community — and weekly sing my way around a faith that still puzzles me.

What doesn’t puzzle is that St. Francis prayer. I still recite it out loud, but now during my morning walk through two tree-filled parks. Often in mid-prayer I am blessed with the sight and sound of trilling birds, some that even my mother’s favorite saint might recognize.

Carol LaChapelle is a writer, teacher and author of Finding Your Voice, Telling Your Stories. Her essays have appeared in America and The Writing Group Book and she blogs at forboomersandbeyonders.blogspot.com.